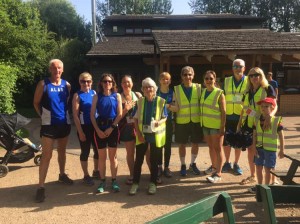 Summer has arrived in Cambridge and 471 participants braved the heat for the 479th parkrun at Milton Country Park. Today the Newmarket Joggers supplied the majority of the 42 volunteers, including myself. There were 44 first timers, some of whom are seasoned parkrunners, with 13 completing their first ever parkrun, we hope you will come back again for your second parkrun next weekend. An impressive 45 runners achieved new PBs, clearly the heat didn’t slow everybody down too much!

This was my first visit to Cambridge parkrun and I loved the course, the shade from the trees was much appreciated on such a hot day. With the wooded paths and glimpses of large expanses of lake it would be easy to forget that you are so near to a city. Within 6 hours of getting home I’d already recommended the event to a friend who is visiting Cambridge next week.

On Saturday, members of the Coldham’s Common parkrun team were running the show at Milton. It all went swimmingly, everyone behaved well and we are now looking forward to the days when we have a choice of parkruns in Cambridge! Well done to Tracy and the team, all the best for when you’re up and running (so to speak).

All of this happened free from the keen eyes of the Event Directors – Gary had his own wedding to attend and I had an appointment with a wetsuit. The trying-on and taking-off was a full workout in itself. I felt sorry for the poor man who had to wait around outside the changing room while I wrestled myself into it, and then out again after it was deemed the correct size. He’s new to his job and the grunting, muttering and heavy breathing may well have had him wondering whether or not intervention was required.

Anyway, so a run happened. 547 of you walked, jogged or ran around our lovely course. There were 47 first-timers at Cambridge, of which 19 of you ran your first parkrun. Welcome to the family, we hope you had a great time! There were also 82 of you who ran faster than ever before - well done!

If you’d like to volunteer, have a look at the roster for the available positions and email cambridgehelpers@parkrun.com. It's great fun and there are plenty of different roles to try.

See you on Saturday!
Helen