"Trail shoes? Yes, definitely trail shoes." It’s not uncommon for a wedding WhatsApp group to include a discussion of shoe choice, but it’s less normal for someone to suggest bringing cross country spikes! However about 25 jolly parkrunners, from seasoned tourists to complete first timers, were joining Cambridge parkrun this weekend to help celebrate the wedding of Joe Barker and Diane Archer.

Meeting as students in the city, Cambridge was the original home parkrun for both the bride and groom, although they subsequently relocated to Finsbury Park and then on to Bangkok (where setting up parkrun Thailand has taken second place to wedding planning). We’d been told to expect mud and narrow paths, but what else did Cambridge hold? Famed for my poor navigation skills, I was a little nervous looking at the course map that I’d get my laps and directions confused. I needn’t have worried - the course was very clearly signed, well-staffed with enthusiastic marshals and, as solid middle-of-the-pack runners, we had plenty of friendly feet to follow. Award for most enthusiastic volunteer day definitely goes to Run Director (sorry I've forgotten his name! Maybe Ed?), who had clearly had his pre-event coffee. His energetic pre-run brief included extra emphasis on the special Cambridge parkrun rule - “we don’t run round the puddles - we run through the puddles!”. Trail shoes were definitely a good idea. Given the recent rainfall, the course was actually less muddy than we’d feared, and even the famous “muddy corner” was easily runnable. The parkrun weather window was in operation, giving us glorious sunshine for the duration. The wooded paths provided welcome shade, and as more of a natural swimmer myself I was disappointed running through the puddles didn't extend to a dip in one of the many ponds and pools on the route. Hotter than expected, the post-run ice cream in the cafe made an excellent substitute for a Travelodge breakfast.

To the formalities: 480 parkrunners ran, jogged or walked their way into the weekend at Cambridge this Saturday, with representatives from 41 different clubs. 24 people ran their first ever parkrun (congrats!) and 39 tourists paid their first visit to Cambridge. 54 PBs were recorded, including one for first finisher, Harry Anderson-Chapman. Three runners reached their 50 milestone on Saturday: Giorgio STERLINI, Jonathan DAVIES and Tony KELLY, while it was 100 runs for Matthew FAUPEL. In unofficial milestones, Marysol and Andrew BELL hit 150 apiece and Joseph PHILIP reached a stonking 300 runs - wow! In the most hotly anticipated result of the day, the groom beat the bride by about 7 minutes but she married him anyway.

The event was made possible by 37 volunteers, and all the visitors I spoke to commented on how lovely to was to see so many marshals around the course - including a number of excellent mini-marshals. As a visitor to the parkrun I was made incredibly welcome, so if you're nervous about volunteering please don't be - you'll get very well looked after. Thanks again to the whole Cambridge team for an excellent morning, it was a pleasure it include you all in the special day. 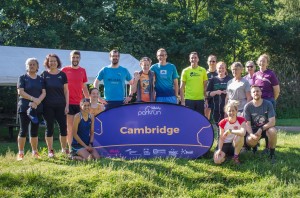