We are currently restricted to juniors age 4yrs to 10yrs

We  look forward to seeing you and please don’t forget , no barcode, no result

The team and I are really looking forward to the next few months. Mike and Tom our new Run Directors are up and running and fabulous additions to the team and Marcus has passed the Event Diector baton onto me - Kerry.

So, fingers crossed for kind weather and see you next Sunday Kerry and the team

Katie will be delivering the drop in sessions in the park by the start / finish area from around 9.45, they will be informal and the more the merrier.

It would be great if everyone knew how to do CPR and in Wales we are pushing to have it included on the school curriculum.This is an a opportunity for you and your family to learn an absolutely essential skill in a fun and family friendly environment

There may also be some treats available and a new parkrun photo opportunity........

Stu Hern completed his last stint as a Run Director at Cardiff junior parkrun on Sunday 14th July. He's written an account of his time on the team:

As Run Director (RD), last Sunday's junior parkrun was just about perfect for me. It had lots of things I like including plenty of smiling runners, new faces among an army of eager volunteers, good weather and absolutely no issues with the results! It really was a beautiful event. It was also my last as Run Director.

I'll explain why I'm stepping down later but, first, I wanted to write a little about my time with junior parkrun.

I had the dubious pleasure of running with my daughter at the very first Cardiff junior parkrun. I say it was a dubious pleasure because it was an atrocious February morning with freezing fog straight from some Gothic horror. My daughter had been looking forward to a parkrun of her own for ages (having heard plenty from me about the grown-up version) but, at four, the conditions put her right off. When we'd got home and thawed out, she asked me "Daddy, can I be a marshal next week?" 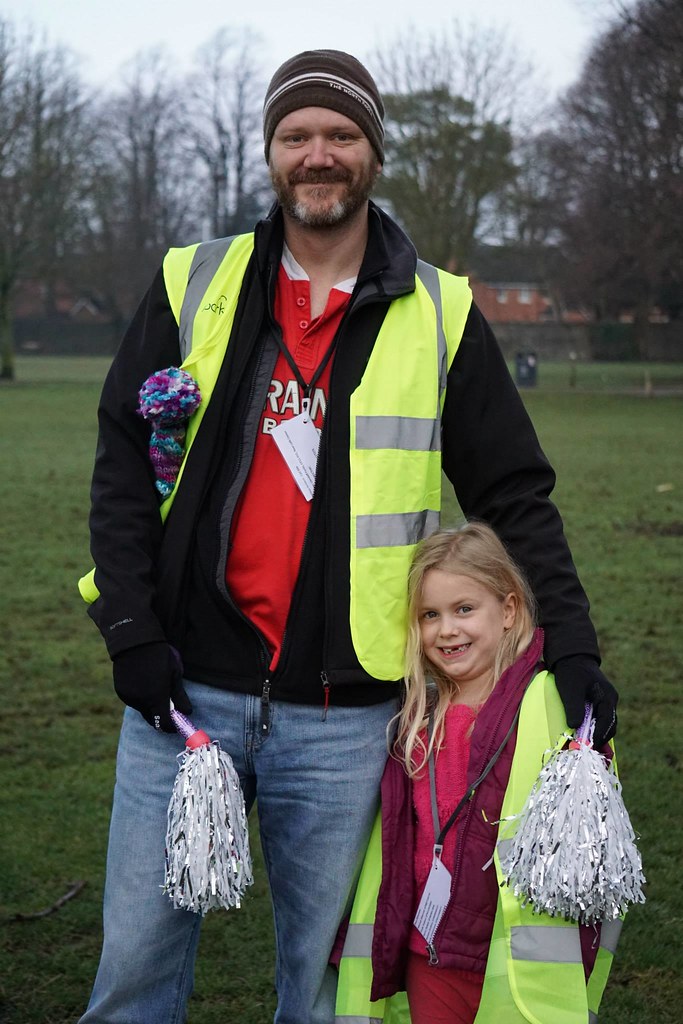 That started a tradition and from then on, at her insistence, we would alternate between running and volunteering. She was immensely proud to be the first junior marshal and looked forward to the weeks where she was in hi-viz far more than the weeks when we were running. We kept up that routine, graduating to other roles such as tail walker, barcode scanner or finish token hander-outers (where she'd often tell me off for not handing her a fresh set of tokens quickly enough). After a year, with one of the original core team, Andy, announcing that he was emigrating to Australia, I decided that I'd ask to join that team.

Three years have passed since that decision. Three years in which I've dressed up as Bananaman twice, been chased as Santa once, been RD twenty five times and flossed more times than I care to remember. The most important number though is 241 - which is the number of different people who've signed up and volunteered on my times as RD. We are so lucky at Cjpr to have such amazing support. There have been some times when I've struggled to fill the roster but I've never had to cancel. Moreover, my Sunday mornings have generally been a breeze as things tend to run like clockwork through no fault of my own! 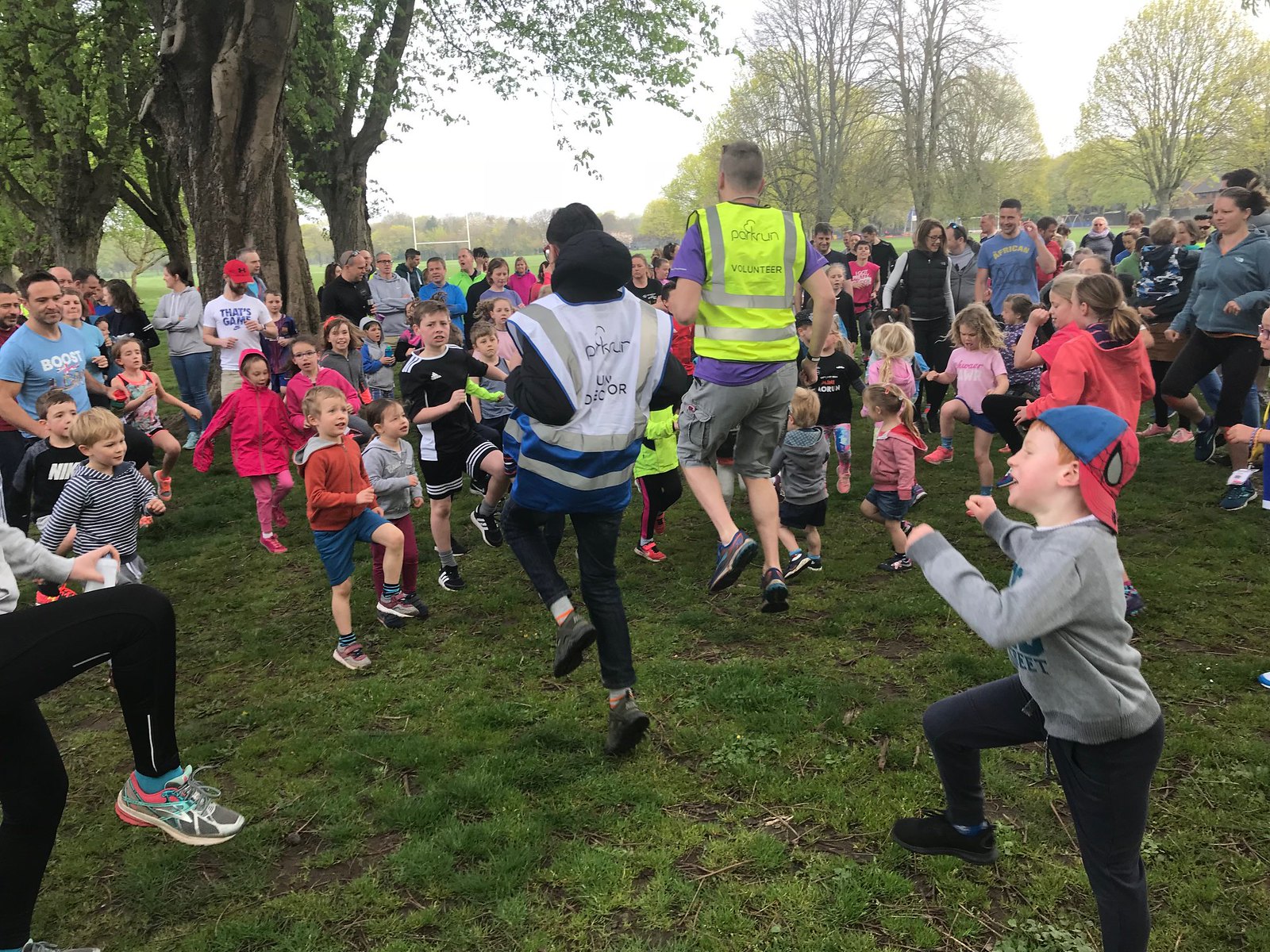 Being part of junior parkrun has introduced me to many in Cardiff's running community - giving me opportunities for a chat before a Saturday morning parkrun, training partners for runs on local trails and even mutual support in the Snowdonia marathon. Most importantly, though, it's allowed me to be part of the best team I've known in my life. The core team of RDs are nothing short of extraordinary: a dedicated and enthusiastic team who'll go to any lengths to support parkrun and each other. So, thank you so much to Marcus, Kerry, Becky, Nathan, Mathew, Stephen, Sam, Samar, Hannah, Tom and Mike.

I've got nothing but good memories of the last three years so why on earth am I stepping down? I'm starting to wonder.

The simple reason is that this started off as a double-act between me and my fantastic daughter. She's a bit bigger now than she used to be and she's more interested in hitting milestones over 5km than 2km. As her focus has shifted, mine has inevitably been drawn with it.

I intend to continue to volunteer from time to time - to be honest, I think I'd struggle to keep away. So, I hope to see you all soon. 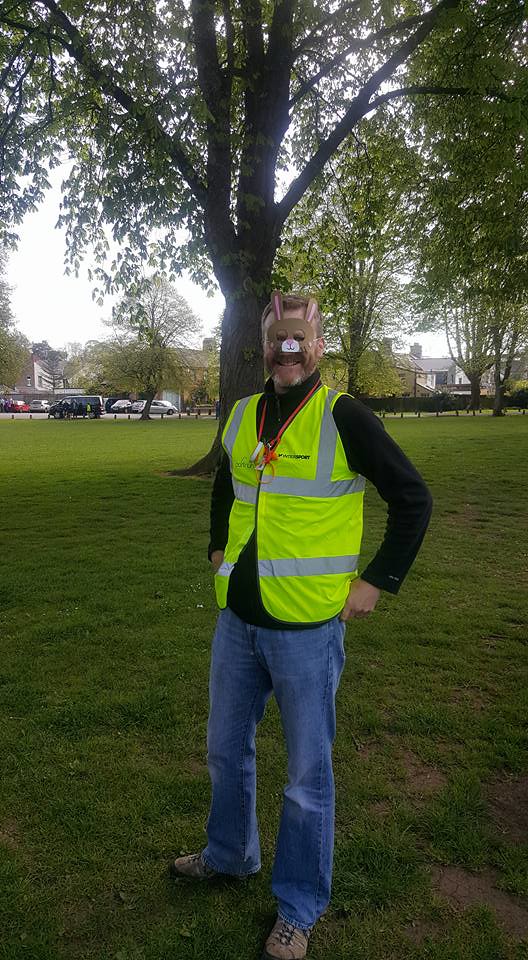 On behalf of everyone else on the team: THANK YOU for all that you've done to enliven our event. Please come back as often as you can!

Cardiff junior parkrun is completely self-supporting financially and, as we approach our 4th Birthday, we could really benefit from some new kit.

The core team often supply lots of the equipment themselves but we now need funds to buy the following kit:

1. Megaphone - to improve the volume of our pre-run briefings
2. Signs - new bilingual signs for the course and first timers briefing
3. New sets of finish tokens as sadly we lose quite a few each week
4. Waterproof clipboards

And, finally, every parkrun now has the challenge of ensuring a Defibrillator is available when events are taking place. Quick access to a defibrillator has saved lives at parkrun events, most recently at Barry Island parkrun.

We would like to see a defibrillator fitted permanently in the park so all users of the park have access not just junior parkrunners.

Please can you consider making a donation to help us deliver this brilliant event each week and provide access to a defibrillator for the park.

All donations need to be made via our webpage which you can find here http://www.parkrun.org.uk/cardiff-juniors/aboutus/

Your support is much appreciated .