A reminder that there is NO Cardiff parkrun this coming Saturday (9th July) due to an another event in the park which will be using both our regular and our alternative courses.

You can get your parkrun fix at one of the four other parkruns within the city - Grangemoor, Tremorfa, Trelai Park and Llanishen Park, or at one of the many fantastic parkruns in the South Wales area (check for cancellations before you travel though - at time of writing both Pontypridd and Pontypool are cancelled). 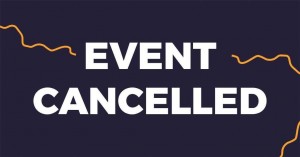 We will be using our alternative course at Pontcanna Fields this coming Saturday (4th June 2022).

Allow an additional 10-15 minutes to walk from the Tesco car park. A map can be found below.

We will also be using our alternative course on 18th June, 2nd July and 23rd July.

We have had to cancel Cardiff parkrun on 9th July due to the Pretty Muddy event using parts of both our usual and alternative course. 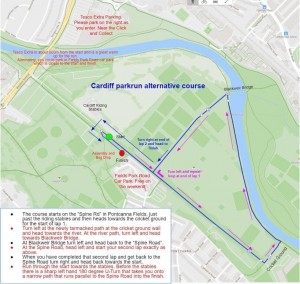 Tweet
A heads up for anyone planning to visit Cardiff parkrun over the summer months - we'll be using our alternative course (Pontcanna Fields) on a few occasions due to other events taking place in Bute Park, which our usual course (Blackweir) uses - 4th June, 18th June, 2nd July, 23rd July.
Allow an additional 10-15 minutes to walk from the Tesco car park. A map can be found below.
We have had to cancel Cardiff parkrun on 9th July due to the Pretty Muddy event using parts of both our usual and alternative course.

Tweet
We are on our alternative course in Pontcanna Fields this coming Saturday.
There is another event taking place in Bute Park, which means we have to relocate.
Please park as usual in Tesco Extra on Western Avenue, or in the car park in Fields Park Road alongside Pontcanna Fields.
We will be starting at 9am as normal and the course will still be flat, fast and timed.. just with more left turns than usual!
Remember, Don't Forget Your Barcode. No barcode, no time, no exceptions.

I'm a Passionista and most of my runs are at Forest of Dean. I get out to play, as an ambassador, a few times a year and also when visiting rellies, doing a half-marathon or on holiday. Today I was supposed to visit my son in London to do Charlton, but his landlady came home from Ukraine a few weeks ago and gave him notice to quit so he found a house in Herne Bay, close to Canterbury, so that was a plan until he got Covid! I'm off for an ambassadors meet up in two weeks and a few of us are celebrating completing the pirates challenge so I needed a sixth C or no new badge in April. Well, living in Monmouth, Cardiff is quite close and it's an original time trial so why wouldn't I just pop down the road on a planned week off?

The only parkruns I've done anywhere near the size of this quiet Cardiff event today have been Cannon Hill and Bushy, but they are completely different to here.
On a gorgeous spring morning I had a pleasant drive along the M4 and down the A48 to a rather large superstore on the banks of the Taff. Where to park? Well, driving into the car park there was a marshal, in hi vis, with a parkrun sign pointing where to go. Thank you, Shon Philips - Every Little Helps!

I'd read where to go and it wasn't difficult to find. Drift towards the road and follow the crowd. Dropping onto the Taff Trail it was easy to locate the start, awash with volunteers and milestone t-shirts. I spotted my first run 25 t-shirts today and every run up to 250 with a smattering of vol 25s and a few apricots from Cardiff and other runs in between. You might feature in a candid pic below 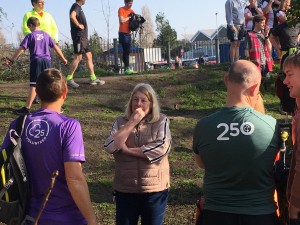 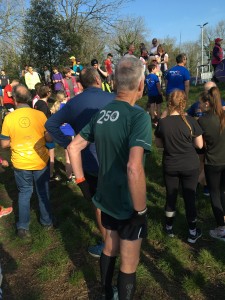 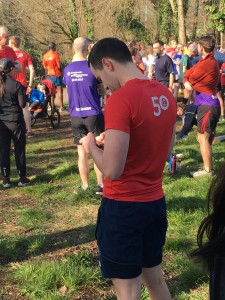 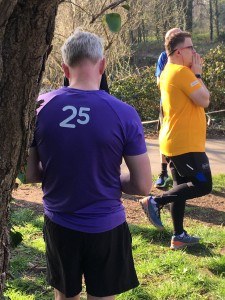 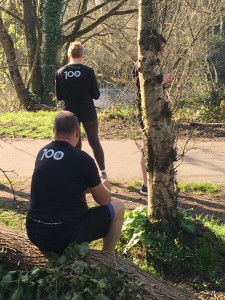 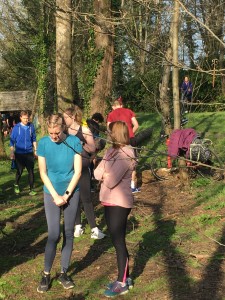 I popped over to speak to today's RD, who informed me that he was looking forward to my run report, but that if anything went wrong, his name was Peter (next Saturday’s RD). As everything went as smooth as butter, with some velvety touches, I'll write that I spoke to RD Lenny Sayers. He pointed me in the general direction of a very busy volunteer coordinator Peter Heath (yes, the one who was getting the blame if anything went wrong!), who was busily checking his roster and directing a very busy start area full of hi vis heroes. 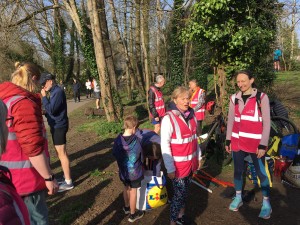 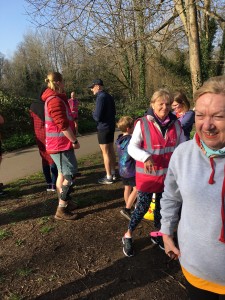 Today was a day of firsts: I saw my first Tail Trike: 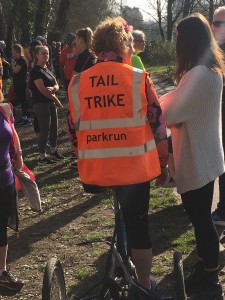 It was also the first time the first timers briefing became the first timers welcome. Lenny satisfied old and new school parkmates with a call to the briefing and a call to the Croeso. Well, we are in Wales!
Today was also the last time we should see Cani-x parkthletes being pulled along by a waist harness. Dog harnesses will still be okay from next week, but they need to be attached to a handheld, short (max 1.2m) lead.
A competent and precise welcome (delivered by core team member Leanne), followed by the RD briefing, was delivered without hiccough (apart from the sign passing out) before we set off to the start. 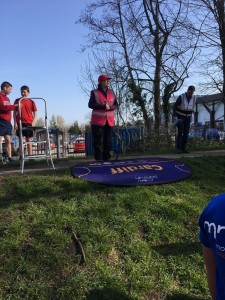 I'd had a couple of stents put in three weeks ago and rehab was going well. With a nice big field, I had a target time and popped in about the mid-point determined not to overexert and enjoy the run. I think my plan worked.

The marshals were a happy bunch, doing everything from protecting us from bollards, to encouraging us along and keeping us away from other park users. 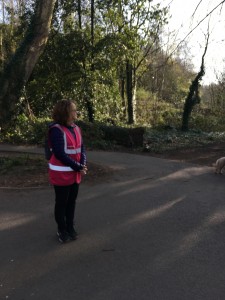 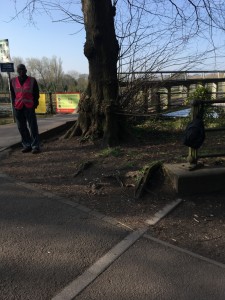 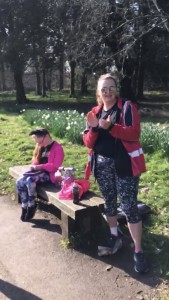 The course had been described as a wonky frying pan. Spot on. I wouldn't want to cook with one that wonky though!! 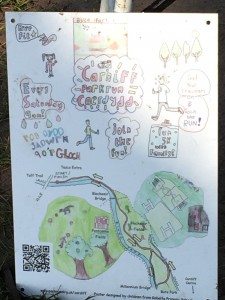 We saw the best of the spring daffodils today and the view of the bridge on the way out and the weir on the way back were just wonderful. 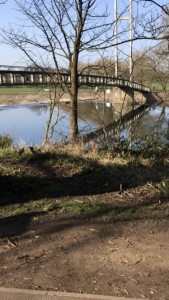 Despite being quieter than normal today there were still a whopping 101 visitors and 28 brand new parkmates joining the global family. 42 people came up as unknown as they either hadn't remembered, or did not have, a barcode.

Sally Louise Crouch was relieved to learn that we now take barcodes from phones and secured her 80th result with a degree of gratitude. We're happy to help. With so many options, from wrist band to watch, from credit card to download, from phone to paper, everyone should be able to access something they can carry on a Saturday to record their achievement.

On the way round I had the pleasure of chatting to several parkmates also visiting the capital. One was visiting relatives, another down visiting sons and several were here to take part in tomorrow's half-marathon. I also bumped into a couple of virtual Nos Galan finishers, one of whom used this parkrun as his evidence. Good plan. It was nice to chat to Richard and Merrick among others.

Out in the field today there were a few milestones being completed. Well done to the three new members of the 25 club: Muditha Abeysekera, Mike Harris and Katarzyna Keating, to Dom Thomas and Roger McPherson for joining the 50 brigade and to Carlos Pinatti for his arbitrary non-t-shirt 150.

Craig Hudson, Edward Land and Phil Hambleton grabbed the virtual podiums for the J/S/VMs, JW15-17 Moli Lyons set a new PB and was joined by Emma Hines and Amy Jones on the J/S/VW Podium. Maria Zubizarreta headed the age grades followed by Emma and Moli. Five parkthletic performances over 80% is impressive as that's reckoned to be national standard running. Wow! 62 parkmates, or about 1 in every 8.5, got a shiny new PB today. Bragging rights last until at least Monday. Enjoy, and well done!

I finished in reasonable order, without upsetting myself, my cardiologist or even my HRM. Result. Donning a hi-vis and joining the happy throng of scanners it was interesting to watch our parkmates bounce, walk, jog, or stagger up the incline to get scanned. A happy and efficient bunch we were. 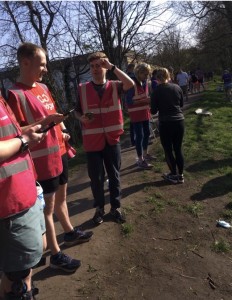 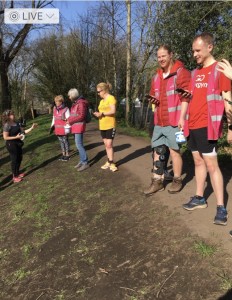 What a wonderful spring day to be out in the fresh air, doing something we love in an outstanding setting and blessed with perfect weather. I really had a truly enjoyable morning, both running and voluntouring.

parkrun can only function with the support of our volunteers. There's plenty to do in setting it up and taking it down as well as a load of ancillary jobs you can do and still get to run. If you want to get involved, just talk to one of the team. Full training and support as well as a boat load of thanks and a new set of t-shirts await! Our thanks this week go to:

Thanks to everyone I met today. You all made me very welcome and very happy. I must get out more often and more locally. I hope to see you again. 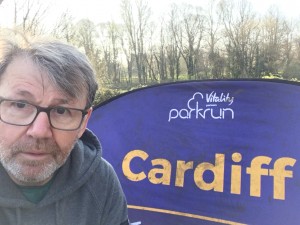