Thank you so much for your understanding this morning when I sadly had to make the decision to cancel. It has been one of the hardest things I've had to do as a run director, especially with so many of you wanting to complete a parkrun on the 29th February. Ultimately I felt that the finish area was just too slippery and wet for several hundred participants. in addition to several other areas of the course being flooded.

I know that some of you did manage to get elsewhere, while others chose to run around sections of the park having committed to coming out in the rain. A massive thank you to everyone who helped me spread the word this morning and to the forty-two volunteers who had come forward to help this week. Finally thank you to Mandy and the team in the Cha Cafe for helping me warm up after two hours in the wind and rain. 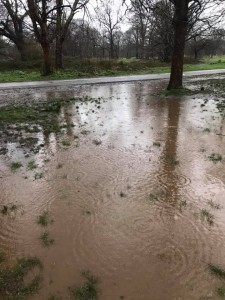 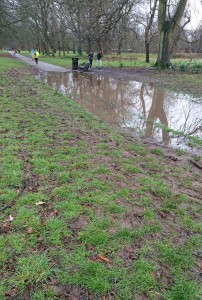 What an amazing parkrun community we have. After the sad decision to cancel today, there was, of course, disappointment. With the appearance of two new water features on the course, along with the finish area requiring flippers, safety has to be the priority and we are grateful to have Run Directors who sometimes have to make the hard decisions.

I am so grateful to be part of our parkrun community. So many who arrived not seeing the cancellation took the time to thank the volunteers, which was very much appreciated. The volunteers who stood in the rain to break the bad news. The parkrunners who took the news so well, including a number of tourists. We hope that the man from Leicester who is attempting a parkrun in every county does return in the summer.

One regular parkrunner (who actually encouraged me to write this report) talked about the positive impact of parkrun and the fact that many who arrived at the park still went on to run or walk the course today.

Here's hoping the weather is kinder to us!

Getting the word out

When we do have to make the difficult decision to cancel we try and get the word out to everyone as quickly as possible. This isn't always easy from a mobile phone in the driving rain, so it's likely to be a brief message, but here are the places we try to publish to.

Failing that as you found this morning we have fantastic volunteers willing to stand in the rain to break the bad news. You'll see from the parkrun page that today we were one of the 124 UK parkruns to be cancelled.