Following the advice and instruction of parkrun UK, our event went ahead as planned this week. We did take measures to ensure that the well-being of our volunteers and participants was prioritised. Plastic reusable cups were not used, people brought their own water, equipment was sanitised before the event, volunteers handling equipment wore protective gloves, the finish area, traditionally a hub of activity and banter was quickly cleared as finishers were scanned and returned their tokens and there were no post-run refreshments. We will keep up to date with developments and update our social media platforms as and when we need to. In light of a rapidly changing situation, we recommend that people consult our Facebook page through the week.

Our first finishers this week were Aaron McGrady (15:55 – the third fastest time ever at our event) and Sam McNeilly (22:01 – her fifth time as first female finisher)

This week 263 people ran, jogged and walked the course, of whom 63 were first timers and 42 recorded new Personal Bests. Representatives of 24 different clubs took part.

Well done to first timer Christopher Hamilton who completed his 350th parkrun today and he has yet to reach his 25th birthday!!! Well done also to Ronnie Forsythe and Sean Keown who became the latest members of our red t-shirt posse by completing their 50th parkrun. Ronnie has completed 46 of these in Castlewellan and Sean 37. We had some tourists today from Coventry and Dundalk as well as visiting groups from Belfast Running Club and Kilkeel Couch to 5k.

This week 249 people ran, jogged and walked the course, of whom 16 were first timers and 46 recorded new Personal Bests. Representatives of 20 different clubs took part. With the unusual Leap Year event consigned to history, numbers continued to remain very healthy and our average attendance for the 11 events to date in 2020 stands at a very healthy 311. Moreover, with an increase in registrations we now have 3985 individuals registered at our event. The positive impact that this has had on the footfall in Castlewellan Forest Park every week is amazing and a key delivery partner in ensuring that the all-round well-being of people in the district is being looked after.

Our first finishers this week were Connaire McVeigh (17:30 – his 4th first finish, closing the gap on brother Brian to two!) and Sinead Lambe (18:28 in her first visit to our event). Sinead is one of the many visitors that we welcome each week. For so many people parkrun tourism is an integral part of the weekend, enabling them to visit and explore new places that they will undoubtedly return to.

Well done to those under 18 runners who complete parkrun regularly who represented their schools at the All Ireland Schools’ Cross-Country Championships in Santry and those who have been chosen to represent NI at the Mini Marathon that precedes the Virgin London Marathon in April.

It was a big week for milestones with Philomena Morgan the fifth member of our team to reach volunteering at 100 events. Philomena is a regular Tail Walker and Marshal who doubles up volunteering with taking part and rarely misses an event as evidenced by reaching this landmark by Event 127. Well done also to Claire Black on reaching 100 parkruns completed (83 in Castlewellan) and Charlotte Mayne (though registered with Stormont, she has completed 30 of her 100 parkruns with us) on achieving the same landmark. Charlotte is a well-travelled parkrunner having completed 21 different courses in reaching her century. Congratulations also to Seamus Lonergan on achieving the 50-milestone red t-shirt (49 of which have been in Castlewellan and the other an excursion to Ormeau!).

The event was made possible by 23 volunteers, Led by Run Director Kieran McMahon:
Bill CASH • Nicola MATHERS • Kieran MCMAHON • Ronnie HORROX • Rita DEVLIN • Sarah MCKAY • Mairead MCCOMB • Emma MCMULLAN • Fiona MILLIGAN • Philomena MORGAN • Justin MORGAN • Eileen HARPER • Sean MILLIGAN • Charles MCALINDEN • Donal WARD • Niamh MILLIGAN • Patricia DURKIN • Maureen KELLY • Matthew MCCARTAN • Lynette KILLEN • Natalie MCAULEY • Naomi RICE • Charlotte GREEN
We are grateful to the volunteers who give up their time each week to make the event possible. The key reward for these unsung heroes is the satisfaction that comes from knowing that their efforts makes a big difference to Saturday mornings for so many people. The roster is full for the next two weeks, but there are spaces that we need to fill for Saturday 28 March. Please get in touch if you can help.

Looking ahead, our next pacer event will be on 21 March where it will be the turn of even numbers.

This week 398 people ran (our third largest turnout after the 567 at Event 1 and the 493 at Event 117 on New Year’s Day 2020), jogged and walked the course, of whom 23 were first timers and 52 recorded new Personal Bests. Representatives of 23 different clubs took part.

For the third week in a row we had to contend with a potential storm on the eve of parkrun and once again there was the distinct possibility of a park closure and the unfortunate cancelling of the event. However, after Risk Assessments carried out by Barney Cunningham late on Friday evening and the Prophet at daybreak on Saturday morning, we were declared ‘good to go’. With a number of events throughout the UK falling foul to the forecast once again, we were delighted that for the third week in a row we were able to ensure that the course was safe and that we could go ahead.

There were three significant milestones this week. Firstly, stalwart setter upper and funnel manager Bill Cash volunteered for the 100th time. Bill epitomises all that parkrun is about. He is committed and reliable and ever willing to put the needs of others before his own desire to run. In hail, rain, sun and snow, Bill is always there, making sure that everything is as it should be. At the end of the event each week, everything is neatly stored away in its proper place and ready for use the next week. We are indebted to Bill for his commitment and service that makes our event such a success. On the running front, Alan Grant achieved his 50th parkrun. Since starting just over a year ago, Alan has been committed to improving his fitness levels and such is his progress that he has signed up for a marathon, more evidence of the power of parkrun to transform lives. Our final milestone was Mia Milligan who reached the J10 milestone. Needless to say, there was cake! Nowadays there seems to be cake each week as 50s and 100s occur with relentless regularity.

Thanks to all our volunteers and don’t forget that you can be part of our ‘pink brigade by signing up to help out.

The threat of another wet and windy event did not deter our Parkrun enthusiasts as this week 314 people ran, jogged and walked the course, of whom 53 were first timers and 32 recorded new Personal Bests. Representatives of 34 different clubs took part.

The final event in the Born 2 Run Forest series took place after our event today and with it brought along a few Parkrun first timers looking for a warm up before their 5K or 10K race. The atmosphere lakeside was enhanced with the music provided by B2R and there was a great buzz about the park.

As has been the pattern since the start of the year we can’t seem to have a Parkrun without a milestone and therefore without a cake. This week Cliona O’Boyle and Pearce Brogan hit their 50th Parkruns with us and provided the very welcome post run treats. Justin Morgan became our latest volunteer to hit 100 volunteers. Justin and his wife Philomena have become an invaluable part of the Castlewellan Parkrun family. They can always be relied upon to marshal or tail walk and we are very grateful of their help.

The first male finisher today was first timer Benjamin Harris from Retford AC, completing the course in 18:29. Ruby McNiff made this her 11th time as first female finisher coming in at 21:21.

This week, as Caira was overshadowed by the seemingly more formidable Dennis, 160 people ran, jogged and walked the course, of whom 13 were first timers and 18 recorded new Personal Bests. Representatives of 20 different clubs took part. 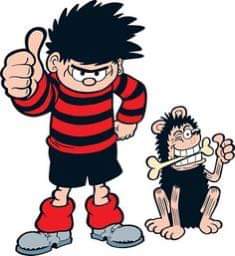 Conditions were less than ideal, but that did not prevent our volunteers and participants from turning up. Was it because it was ‘pacer week’ and some were looking for that odd-numbered PB? Could there have great excitement about the new pink volunteer bibs that would be adorned for the first time? Could people just love parkrun that much! Many followed the instruction to wear red, but much of the colour was hidden from view under waterproof coats worn to keep out the wind and rain. Despite the poor weather, spirits were not dampened and there was a great sense of satisfaction at the post-run tea that the elements had been braved and survived. For the second week in a row, we managed to dodge the worst of the weather as it became much more inclement as proceedings were drawing to a close.

Our first finishers this week were Daniel Molloy (17:41 – his 16th first finish in Castlewellan in 43 outings) and Sarah Graham (19:37 – her 5th first female finish, maintaining her 100% record!). There was one big milestone today with Terry Cunningham reaching completing his 50th event. To mark this occasion, he volunteered on the bike, hopped off and completed the course for the second time on foot, finishing just ahead of the tail walking crew in 43:54. The now mandatory cake was produced and enjoyed by all present in the Life Adventure Centre. 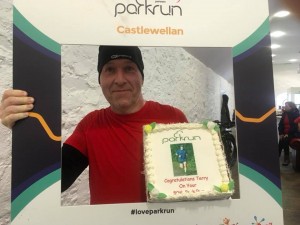 The Roster is full for Event 125 on Saturday 22 March, but we still need 6 more volunteers for Saturday 29 February – our Leap Year Event when we will be running the course in reverse. Additionally, we recently sent out our volunteer appeal for March. Please respond and let us know when you are available to help.

Some of our homemade signs are starting to show wear and tear after 124 outings and we need to replace them. We would be grateful for some donations to our event fund. Donating is simple and can be done by PayPal or a debit/credit card. Simply go to the ‘more’ section of our webpage and click on the ‘donate’ image. All donations and spending are logged for complete transparency.