262/3/4/5 (read down…) of you turned out on what was quite a lovely morning before the rain set in this past Saturday and were able to ignore the ovalchasing. (Anguished howl of disappointment emanates from Dan’s office… ) Everyone managed to cross the finish line before the rain arrived. Good work!

We were pleased to welcome tourists from Chelmsford, "Kings Lynn or Holkham", and Colney Lane! We also had five people come and take part in their first ever parkrun with us! Welcome to the parkrun family guys, I hope it’s the start of a long journey. 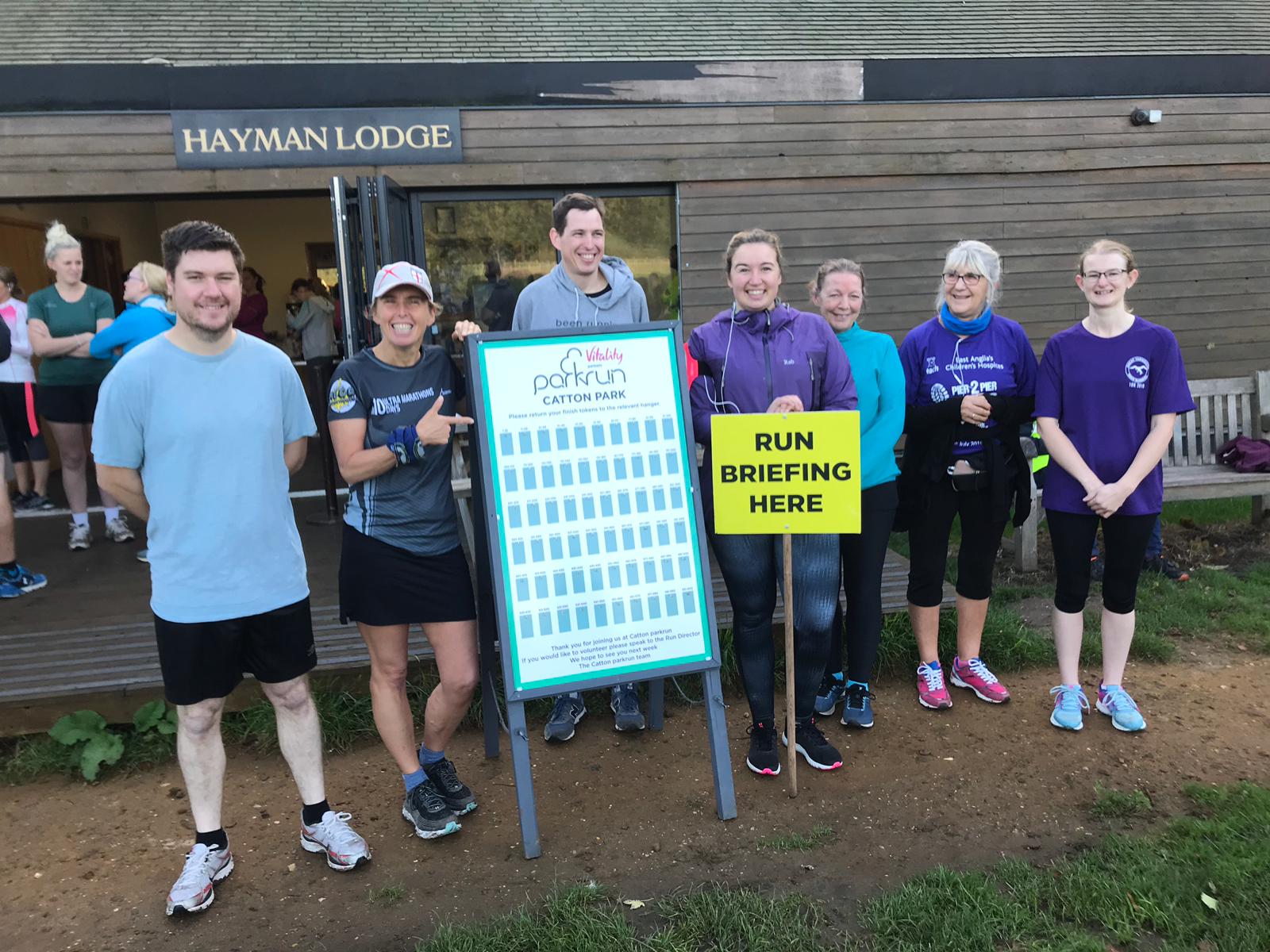 We had a bit of an oddity in that there were no milestones that were meaningful or arbitrary. However, as I like to do in these run reports, I like to recognise anyone who has achieved their difficult second parkrun with us. So this week a big shout out goes to: Jonathan SHACKSHAFT, Tony BELL, Ziedite KOHA, Ryan DAVIS, Rachel DAVIS, Michelle DODDS, Martin BARNES and Sue ALLEN!

This week coming we’re due to have some major milestones though! Firstly, Jack Thompson is due to hit his 200th run. Jack, as you may or may not be aware, is well into his 80’s, competing in the 85-89 age range. Unless the weather is bad, though - he’s out here every weekend with us. I hope I’m still able to go like Jack at that age! Come and cheer him on this weekend.

Secondly, Brtt and Kelly Cornish are both due to complete their 250th parkrun this Saturday also! They’re bringing cake! J This is especially impressive when you consider that Brtt has volunteered 123 times (that’s been registered, as part of the core team you’ll find him buzzing around doing new runners briefing, unloading his shed, unlocking the gates to the rec ground, putting out cones and generally being helpful, even when he’s running). Kelly has volunteered 43 times – and yet they’re still earning their green T-shirts this weekend.

It’s due to their regular volunteering, along with Kyra and Luke (and Bella the barkrunner) that the Cornish family as a whole was nominated for the Broadland District Council “Community at Heart” awards. Sadly, they didn’t win on this occasion, but we’re so grateful for their continued efforts and being “The first family” of Catton.

*Another howl of disappointment comes from Dan’s office* Oh dear. Bossman isn’t taking the result of the Bundlegrass Championship or The Cornish Family not winning very well. Hold on a second. *Throws a squeaky toy into Dan’s cage office.* That’s better.

One interesting thing about the results this week – while we don’t often talk a lot about the first finishers at our parkrun, this was an interesting stat – was that out of the top three finishers this week, two were ladies! So much respect to James Johnson, first finisher, but also to Amy Beck and Alicia Lacey, second and third finishers!

Right, another thing – some of you may have noticed that these run reports have become a bit spotty as of late. Sadly, my “real” world job has been a bit manic these past few weeks. While I’m going to make every effort to get these done in the future, is there anyone else out there who wants a go? Happy to provide, as usual, full training and also it would make Dan happy. Well, happier. Well, it might make him stop gnawing at his paw hand as he tries to hold a pen to do it himself when I’ve missed deadline again. Email catton@parkrun.com and let us know!

We were a little short on volunteers this week. This had the effect of the RD having to pitch in and do number checking. We had some people “Funnel Duck” this week – which is where they have crossed the finish line but not taken a token at the end of it. We know roughly were all these guys were, but the net effect was that it takes a long time for the results to get processed, and as we don’t know exactly where they were (due to lack of volunteers) it means some results may be a little out between 165 and 208. Sorry! We do our best.

Due to lack of volunteers, I was also out in the rain after processing results putting the traffic cones away. While I don’t mind – it’s all part of being part of the core team, I’d rather not give up three hours of my morning to get everything done when many hands could make light work.

The more people we have volunteer, the more accurate and the smoother everything runs. <3

Right, my whining is over!

Onto happier topics, I’m pleased to be able to let you know that we’re going to be having an additional parkrun on New Years Day! Right now, we’re planning on having an earlier than usual start of 8:30 AM. Why so early? Because you have a rare chance of doing a double! Other local parkruns will be having their events a little later in the day (10/10:30) so you can scramble from Catton to other events in the area and chalk off two extra runs to start the year with!

For details of what parkruns are doing what, check the national parkrun Christmas list here: https://www.parkrun.org.uk/special-events/ - (We’ll be updating our entry once I can get Dan’s special keyboard hooked up and he remembers his password. He’s tried “ARRRRGGHHHH” and “WAAGGHHHH” and also “ARRRWAGGH” but none of those have worked yet. )

On New Years Day this year we did the late parkrun and had over 700 participants. Please remember the strain that such a large events can put on our volunteer team AND parking availability. We could really use as many people to get an extra volunteer credit as possible – if you think you might be a little too dazed to run, come help us out. The fresh air will do you some good! And you’ll get an extra credit to your 25 volunteer T-Shirt. And if you’re planning on doing a double – please, please, please car pool with your fellow parkrunners. The last thing we want to do is start off a New Year by having our neighbours complain!

PS. Please don’t park on Oak Lane. If nobody parked there, I wouldn’t have been getting rained on at 11 AM on Saturday collecting dirty traffic cones and feeling a bit sorry for myself. Please? Ta.