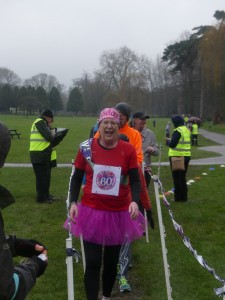 Todays tutu parkrun is dedicated to the memory of Helen Stevens. We welcomed Helens friends and family who were taking part today. Helen began running here in September 2014 but in 2017 she was diagnosed and treated for breast cancer. In May of 2018 she contacted me because she felt guilty for not being able to volunteer for a while. She told me that the reason for this was because  she had set herself a goal to achieve 60 parkruns by her 60th birthday. At that point she had only completed 29 parkruns, she told me that she knew it would be a challenge and would leave little room for movement and certainly would not allow for any cancellations due to bad weather! She executed her plan to perfection, she was driven and determined to achieve her goal and so on her 60th birthday (19th January 2019) she completed her 60th parkrun and celebrated her achievement in true runners style - with plenty of cake. Sadly Helen passed away a few weeks later. 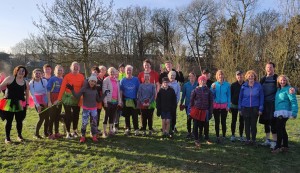 It was an icy start but this week 273 people ran, jogged and walked the course. We welcomed 12 first timers to parkrun and 13 visitors from other parkruns. 39 recorded new Personal Bests. Representatives of 26 different clubs took part.

Congratulations to Gerard Howell for achieving his 100th parkrun milestone. Gerard began running here on event number 2 back in April 2014 and has completed 84 of the 100 here at Chippenham.

Congratulations go to John Belcher for achieving 100 volunteering stints as a photographer for parkrun - 97 of those were here at Chippenham. Many thanks for all of the photos since 2017 - and the time that is takes to process and load them!

Congratulations also go to Erika Masna. Erika began running here in September 2014 and has completed 38 of the 50 here at Chippenham.

Many thanks to the amazing 23 volunteers: