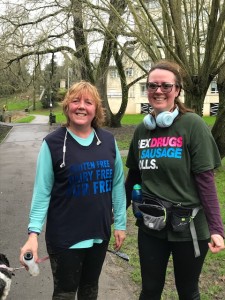 Storm Ciara arrived to late to disrupt us last week, however, Storm Dennis threatened to be a menace. As a run director it is down to me to decide whether or not I should cancel. Like most people in the UK I spent Friday night glued to my Met Office app (other apps are available!), whilst listening to the wind howling against the windows hoping that the wind would die down and not leave a trail of devastation in its wake.

We arrived early to set up and check the course as we always do and I was delighted when Pete returned from the Muddy Meadow to say that the paths were clear and that it was business as usual.

In the first timers briefing I welcomed 25 visitors from other parkruns such as Ashton Court, Maidstone, Bromley, Melksham and Bath Skyline. I also welcomed 2 first timers to parkrun (though I suspect there was more!)

I did the usual brief, noting that everyone was reluctant to stand in the mud - I reminded them that there was no avoiding the mud.....in fact there was a lovely batch of wet and sticky mud waiting for them on the second field! I also warned that if a branch were to fall during the run it would be game over and everyone needs to return to the start line, get scanned and everyone would get a time of 59:59. Fortunately it didnt come to that and the 178 runners that turned up enjoyed a safe but somewhat windy run!

Once the last runner was in we packed up and went home dancing with glee that Storm Dennis had not ruined our day! Little did I know that pesky Dennis has indeed been a menace! When I got home I started to process the results, something that I have done many, many times before I could almost do it blindfolded....I did say almost! The times uploaded and then one of the scanners uploaded......then disaster.....the other scanning app kept crashing. I tried everything I could to get the data out of the scanning app but to no avail, even the tech support was unable to explain what has happened. I put out a plea on Facebook asking for people to get in touch....and they did! Thank goodness for the funnel managers notes...we don't often need them but they are really useful when things go wrong.  So my Saturday afternoon and Sunday was spent forensically piecing the results back together. Not sure it was a perfect job, but hey-ho we are all volunteers and we do the best we can!

Have a great week of running see you all next week.