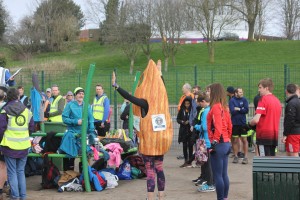 While Chippenham parkrun has been a constant amongst a few weeks of variation and cancellations in the meteorological and parkrun worlds, it was an absolute delight to meet in Monkton Park this Saturday with such a small chance of rain, almost no wind and a little bit of sunshine.

Our second field would still be best described as soft, offering more than 4% additional bounce, though fortunately without much in the way of surprise water features or wind tunnels this week.

It was our monthly pacer week – we had volunteers attempting to help out runners at 24mins, 25mins, 26mins, 27mins, 28mins, 29mins, 30mins and 37mins. This is one of those volunteer roles with so many plusses that when you’ve done it once you’re addicted!
You get:

While some of us are pleased at making it through the mud in one piece each week, one of our visitors from Salisbury arrived to run our parkrun dressed as a nut!

This week 196 people ran, jogged and walked the course, of whom 19 were first timers and 28 recorded new Personal Bests. Representatives of 21 different clubs took part.