Well our 320th event was certainly a cold one! I'm writing this run report at 5.30pm on Saturday afternoon and I think I might still be thawing from this morning's parkrun! We had sleet, a bitter head wind and the odd moment of blue sky! But nothing was going to dampen our parkrun spirits. Sometimes bracing ourselves against the elements makes us even more grateful for the things that bring us joy, and for that reason this run report is one big THANK YOU...

THANK YOU to all the amazing volunteers who really went above and beyond today. 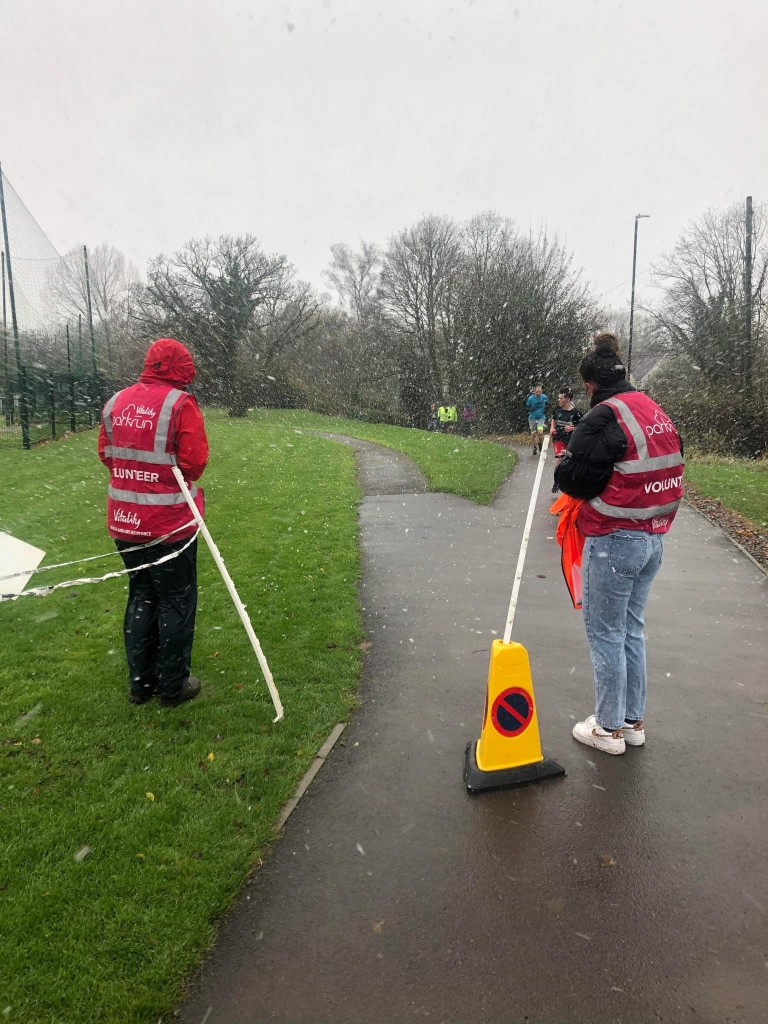 THANK YOU to the 187 people who ran, jogged and walked today, 21 of you who were visiting Chipping Sodbury parkrun for the first time. An extra thank you to:

And finally a personal thank you from me. Being part of Chipping Sodbury parkrun brings me so much joy. Seeing your friendly faces, feeling part of the CSp family, watching amazing people show such kindness towards each other, really is the best, and only, way I want the weekend to begin - even when it's chilly-chilly-brr-brr!!!

See you next week,

This event was made possible by 29 volunteers:

Today's full results and a complete event history can be found on the Chipping Sodbury parkrun Results Page.

Thank you to Debs Airey for doing a double volunteer stint this week tail walking and writing our run report :-)

35 days to Christmas! Just in case anyone needed a reminder. Where will you be running on Christmas day? This became the one of the topics of today's “Tail Walkers Chat”, plus what crazy outfit will be donned? Who knows, tune in on Christmas day to find out.

Enough of that festive chit chat and on to an interesting fact about today's date. Did you know that on the 20th November Al Gross invented the walkie talkie. (fact from Wiki, so forgive if slightly wrong), but a nice Segway on to Chipping Sodbury’s use of the walkie talkies and how the marshals use them to stay in communication throughout the parkrun. At specific locations around the parkrun a marshal will hold a walkie talkie to check on the progress and update the RD & ED at all times. If an issue or problem occurs the core team can leap in to action. Of course, this does not stop us having a little fun with the radios but that’s a secret! If you would like to volunteer email the Chipping Sodbury email address (chippingsodbury@parkrun.com). Volunteers and chief walkie talkie holders are always welcome.

Thank you to everyone who attended the day, it is always wonderful to see some familiar and new faces. Well done, and see you next week.

Thank you to Stephen Selwood who took some really wonderful photos this week - have fun trying to find yourself in them! They're all available in the Chipping Sodbury parkrun group on Flickr: https://www.flickr.com/groups/chippingsodbury-parkrun/pool/

Start 2022 in the best way possible...with a parkrun at Chipping Sodbury!

Start time will be as usual (please arrive no later than 8.50am for the briefing and be ready to start the run at 9am).

Get your volunteer credits in early by helping us fill the roster....email us at chippingsodbury@parkrun.com to put your name down.

We are excited to welcome you to a Christmas Day parkrun at Chipping Sodbury! Start time will be as usual (please arrive no later than 8.50am for the briefing and be ready to start the run at 9am).

We need lots of little elves to help us fill the roster so don't be shy....email us at chippingsodbury@parkrun.com to put your name down.

I do have a few vampire puns.... but they suck, so I'll stick to a regular run report...

After the very heavy rain during the night, I'm sure everyone was very relieved that the rain held off for the duration and the sun even came out by the end which was lovely to see. There were of course a few puddles on the course, nice and refreshing so I hear!
Tom Peaston took on the role of Run Director today, I'm sure you'll all join me in congratulating him on his first and very well presented address to the crowd. 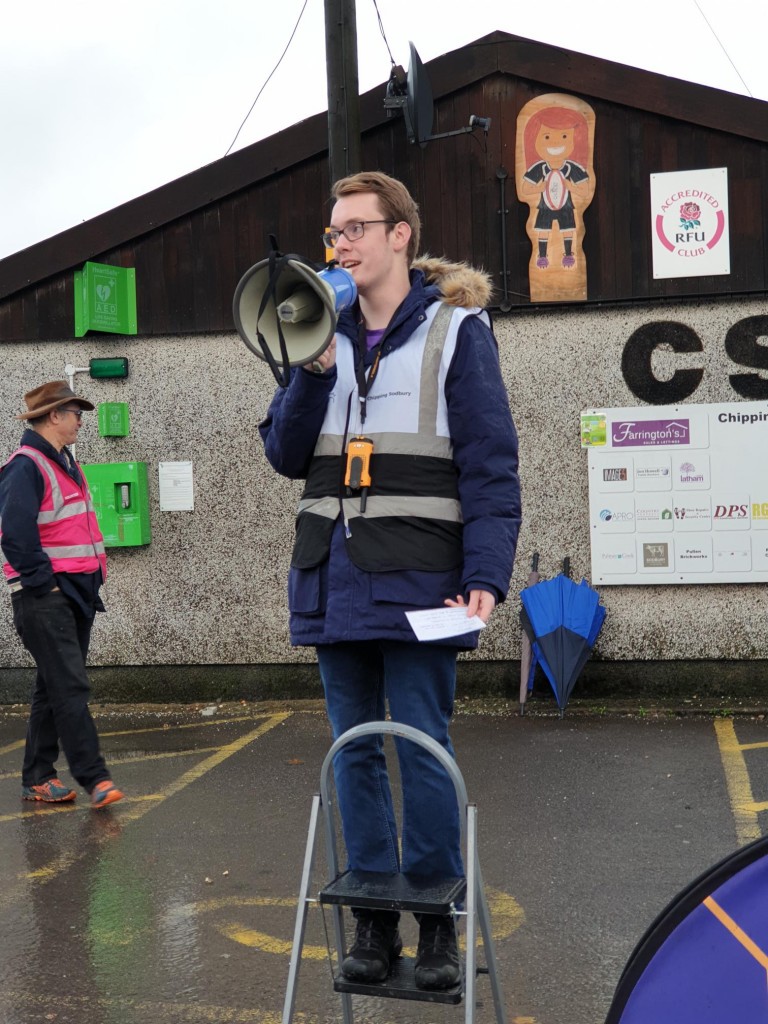 Tom Peaston gives the pre-event briefing for the first time

Well done to the 204 brave souls who ran, jogged and walked the course, of whom 27 were first timers and 14 recorded new Personal Bests. Representatives of 22 different clubs took part.

Congratulations to Rob Peaston and Avis Noott who both celebrated their 100th parkrun today. Avis and Rob have both done the majority of their runs at Chipping Sodbury parkrun. Avis is in the 80-84 age category and only took up running three years ago. She finished today with a more than respectable 71.89% age grade! Rob started running at parkrun when his son, Tom, joined us to volunteer for his Duke of Edinburgh award. Rob got the volunteering bug too and as well as clocking up 100 runs, he also volunteered for his 30th time today. 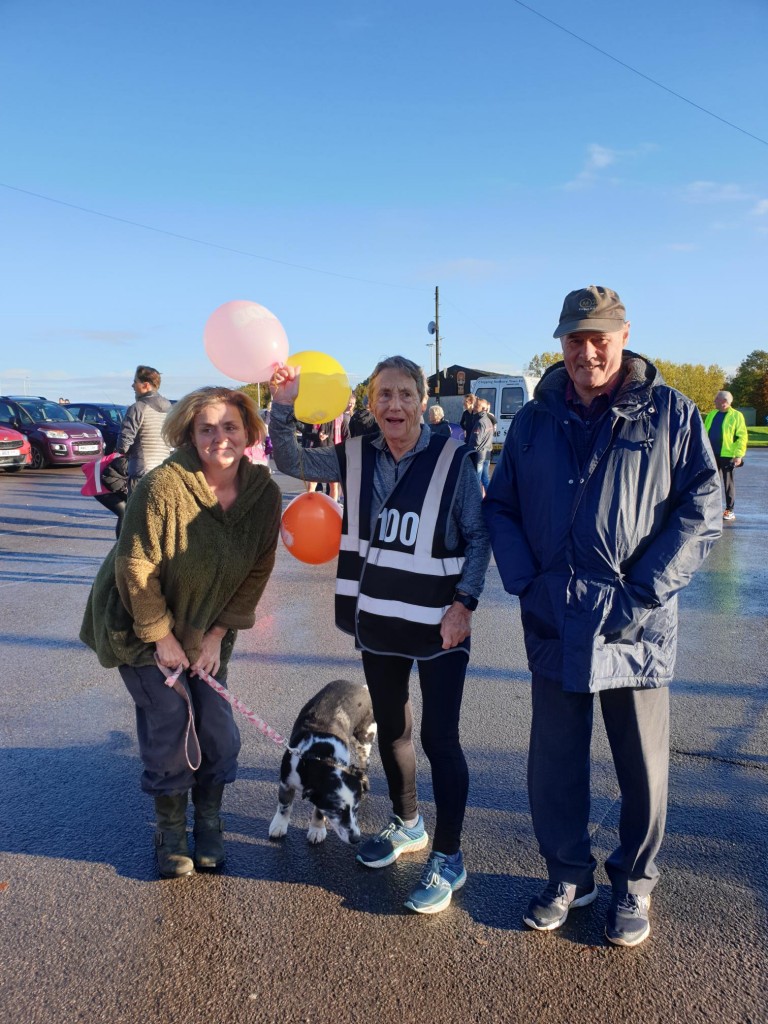 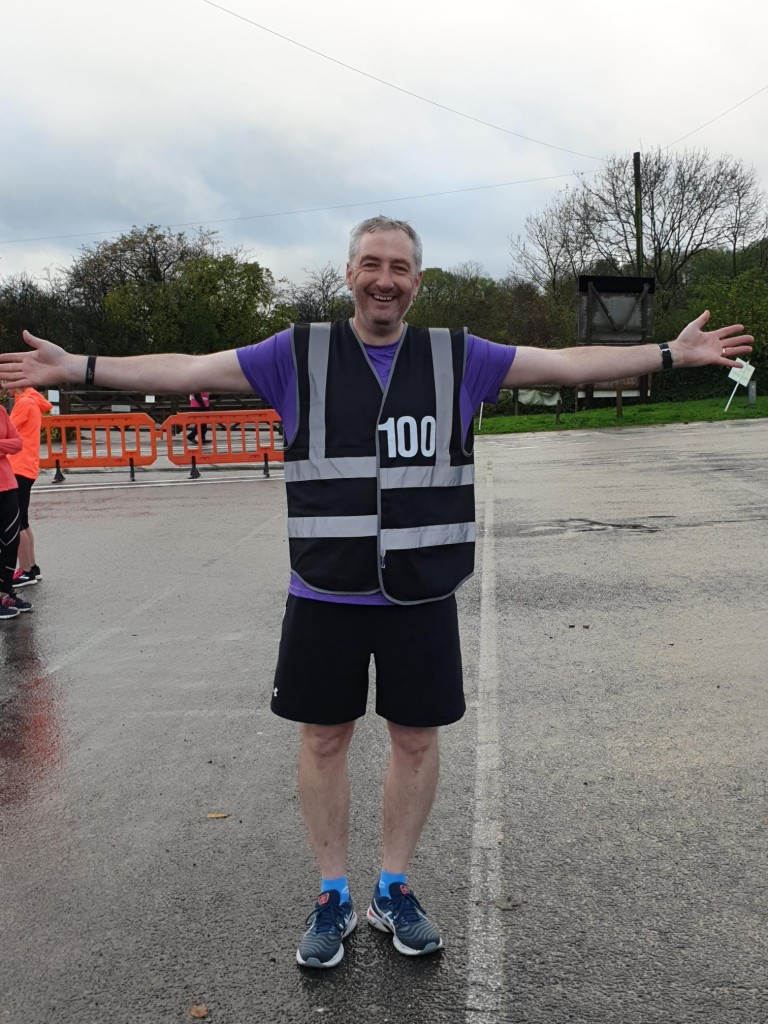 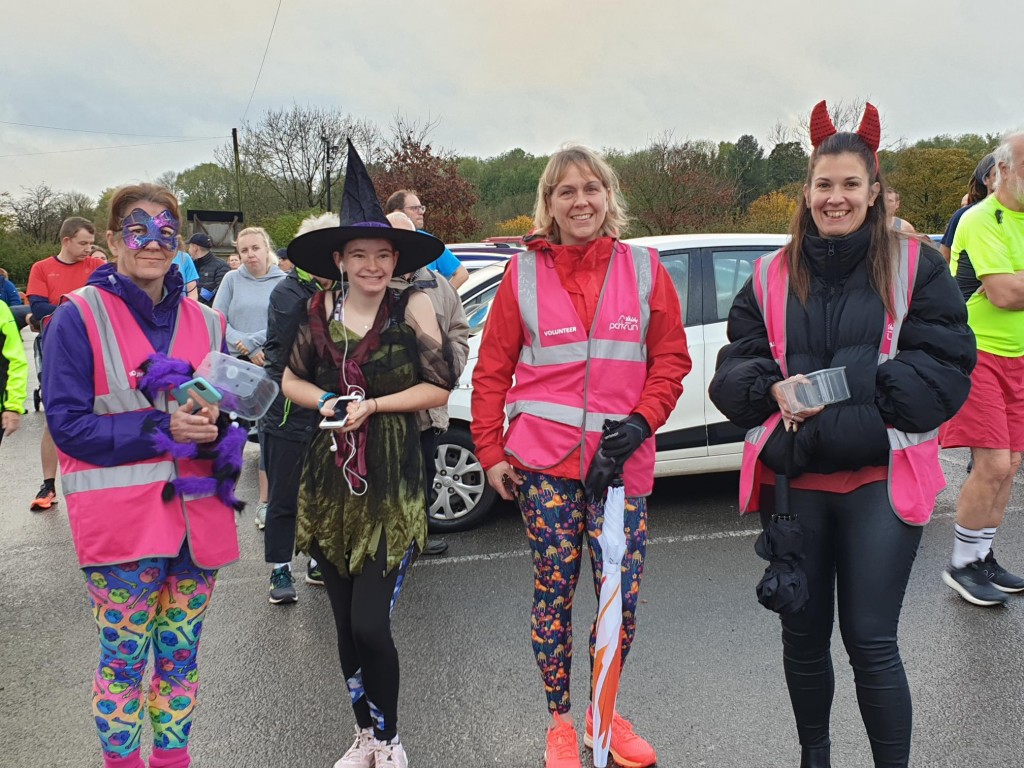 Today's full results and a complete event history can be found on the Chipping Sodbury parkrun Results Page.

Have a fang-tastic Halloween!

Thank you to Kim Leonard for writing this week's run report. If you'd like to volunteer for any of the roles, drop us an email at chippingsodbury@parkrun.com