Four of the top-ten finishers in Saturday’s Clacton Seafront parkrun
had cause for celebration after setting impressive new PBs.

Ronan Edwards (second), Nigel Smith (sixth), Francis Turner (eighth)
and Jamie Williams (ninth) all clocked new best times – and it turned
out to be a day of double delight for Ronan.

Not only did his time of 19:05 set a new benchmark, he was also
running in his 50th parkrun. No mean feat for this talented JM15-17
runner.

Clacton Seafront Runner Nigel was taking part in his seventh parkrun
and managed a new PB of 21:34, while Francis, in his third parkrun,
reached the finish funnel in 22:01.

Wells City Harriers’ Jamie, another up-and-coming runner, this time
from the JM11-14 category, finished a couple of seconds behind in
22:03.

As for the rest of the top ten, the consistent Mark Jasper was first
finisher once again, this time in another impressive time of 18:07.
Flynn Eyre was third with an excellent sub-20 time of 19:46, while
dad James followed him home in 20:34.

Isaac Moore, who recently clocked up his 100th parkrun, was fifth in
21:32 while another young gun, Jonathan Lower, was seventh in
21:51.

With Francis eighth and Jamie ninth, William Haining completed the
top ten in 22:06, and also bagged himself an age grade record as well.

Congratulations to Debbie Siggery who completed her 50th parkrun in an impressive 27:10 just 5 seconds shy of a PB.

Remember next week is our 222nd so if you would like to wear a tutu to celebrate that would be wonderful, also Emma will be here from 8:30am to talk to you all about diabetes, have a great weekend stay safe and I will see you all very soon. 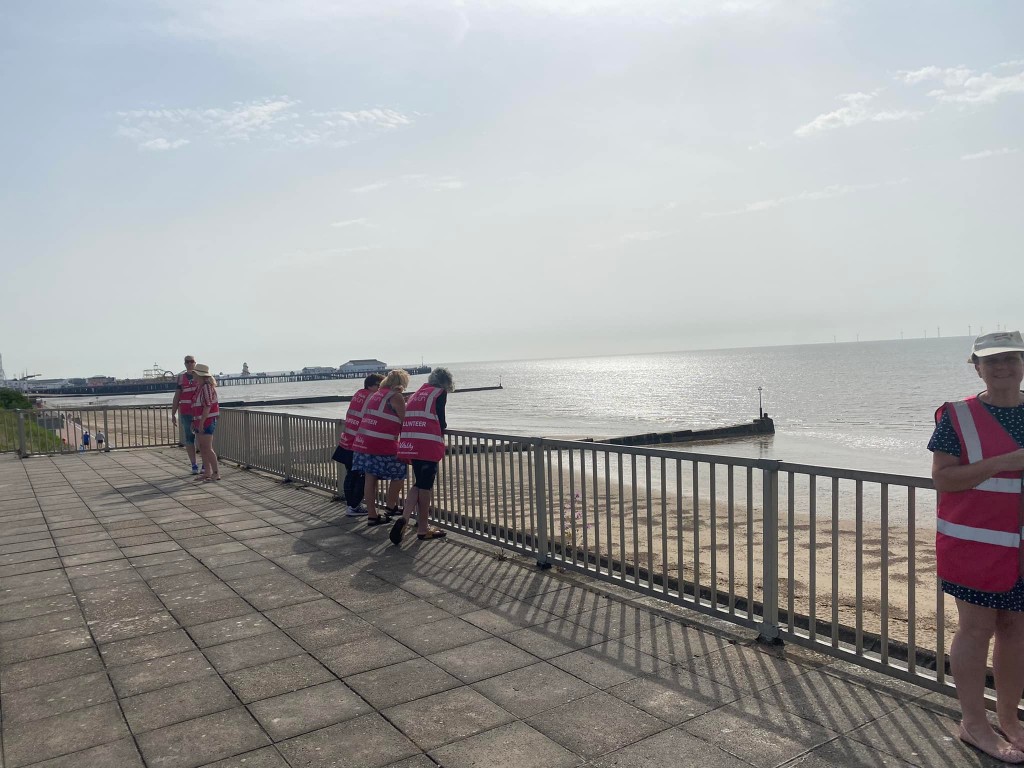 An extremely warm and sunny Saturday morning for this weeks parkrun, but as always with a bit of a breeze!

This week 140 people ran, jogged and walked the course, of whom 21 were first timers. 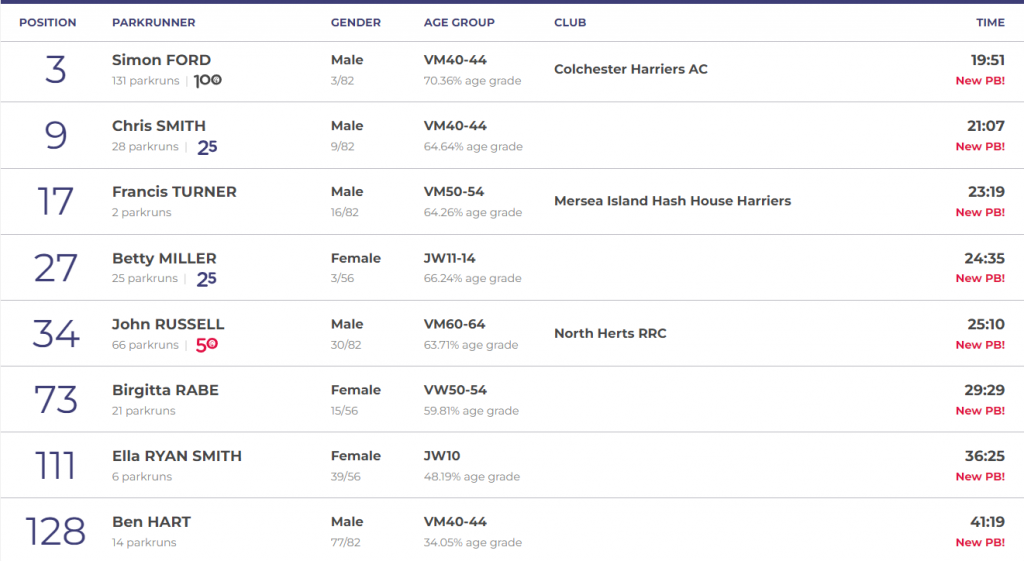 Congratulations to you all. 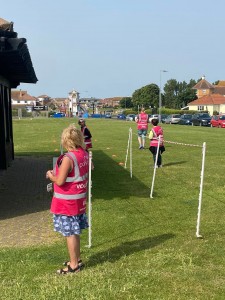 Thank you as always to our wonderful volunteers, we couldn’t put on a safe, timed run each week without you. A special thank you to Lorraine for stepping in to cover the VC role this week.

As mentioned in the pre-running briefing we are pleased to welcome Chris MALONEY to the Core Team, as a Volunteer Coordinator.

This weeks event was made possible by 15 volunteers:

We love how our volunteers embrace the weather conditions, including the lovely Gill who remodelled the Tailwalkers Hi-viz into a summer top. 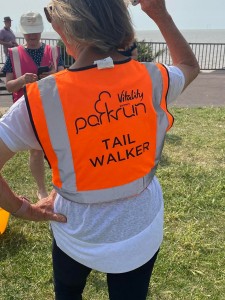 Thank you to everyone who joined us for this weeks event. I am handing over the reins to Lorraine and Mark who will be back as your RD and VC dream team for the next two weeks.

The full results and a complete event history can be found on the Clacton Seafront parkrun Results Page.

We continue to enjoy good weather on our coastline and this Saturday's parkrun was no different as we arrived ready for setup on Saturday our only concern was would it be too warm .... we are runners after all and are never happy, it's too cold, too warm, too windy any excuse for why we didn't get a PB 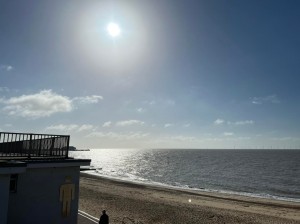 Warm weather aside this week 123 people ran, jogged and walked the course, of whom 13 were first timers and 17 recorded new Personal Bests. Representatives of 17 different clubs took part.

Regular first finisher Mark JASPER of Great Bentley RC put in a great performance only 10 seconds outside of his PB I like to think on a cooler day that performance would have earned him a PB. 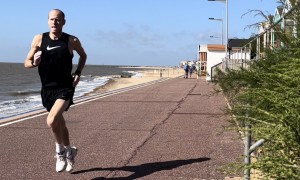 Our first female finisher was another Clacton regular Vicky MOORE.

A super effort from Ian SHEPHERD who was just behind her earning a new PB of 23:08 someone I know who has been working hard to improve this year so it is good to see hard work paying off.

As well as Ian well done to the other 16 people who recorded PBs on our course. 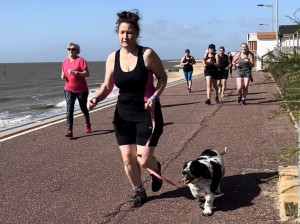 I always say that no volunteers means no parkrun, so please do see us about volunteering at future events and keeping parkrun free for all.

Thank you for completing our course this week once again and well done to all who did whether you ran, walked or jogged it's a great achievement to get your shoes on early morning Saturday and get down to our course to complete it.

As some further incentive to this week's course, the "Beat The Street" game has started in Clacton & Jaywick Sands with cards available from various places in and around town, the leisure centre, library and Asda to name a few and the app available it's a great fun way to get out covering some mileage. This week we have Becky from the CVST team (18th June), coming along to allow you to score extra points there is a beat box on our course so please get involved and see this link  Clacton and Jaywick Sands | Beat the Street for further details. 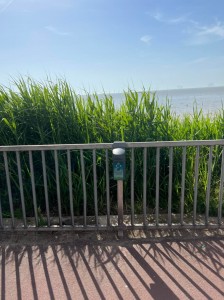 This week Mel & Lorraine are your RD and VC.

I hope to see you out on the course.

Today's full results and a complete event history can be found on the Clacton Seafront parkrun Results Page.

It was a beautiful sunny morning on Clacton Seafront, but extremely windy for our Jubilee Bank Holiday weekend parkrun. Due to the events taking place on the Greensward, we were back on our original course from 2016, starting by the Beach Diner café.

We had asked parkrunners to come dressed in something red, white or blue and it was amazing to see so many people dressed for the occasion. The promise of post run treats clearly enticed a few more people to join us, as 150 people ran, walked or jogged the course. 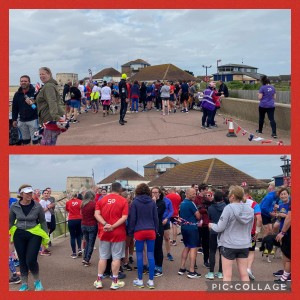 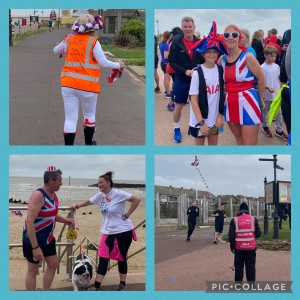 Thank you to all of the amazing people who volunteer their time in order that we can put on a free, safe and timed 5k event every Saturday morning, we really are so incredibly lucky to have such an amazing group of regular volunteers.

If you would like to volunteer at parkrun, you can view the current roster for the next few weeks here https://www.parkrun.org.uk/clactonseafront/futureroster.

The male and female placings were as follows: 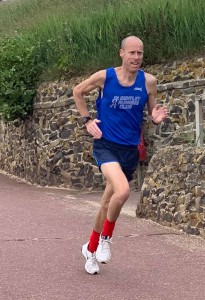 Former regular parkrunner Ben SELDON (VM40-44) joined us for his 3rd parkrun of 2022, and marked it by coming 3rd overall in a time of 20:02. Ben currently jointly holds our male most first place finishes record (26). 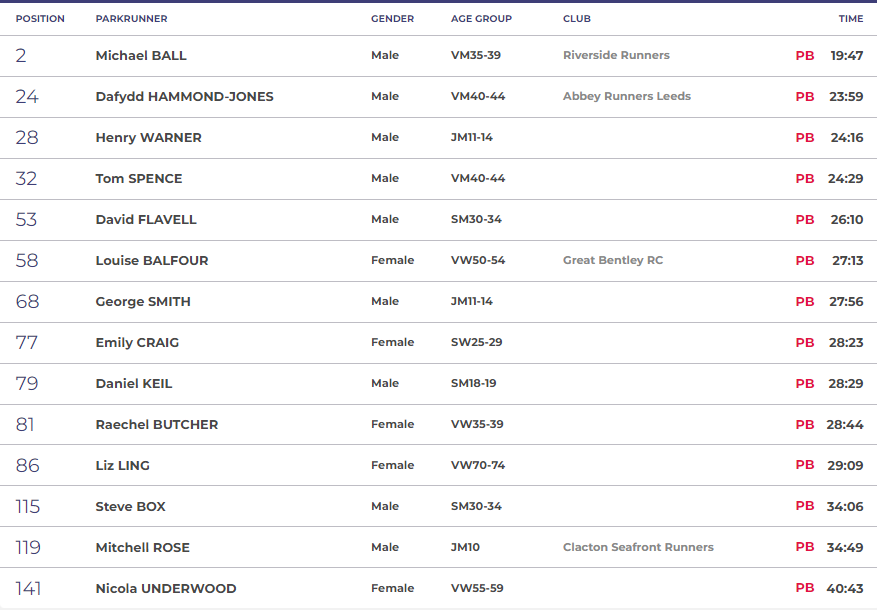 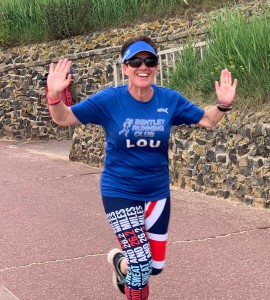 Mitchell ROSE of Clacton Seafront Runners (JM10) who ran only his 10th adult parkrun at Clacton accompanied by his parents, ran a new PB 34:49. 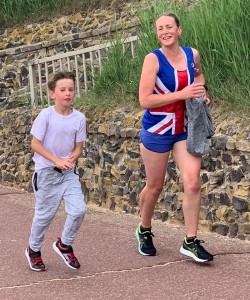 Congratulations to all 14 parkrunners who achieved new PB’s.

Clacton Seafront parkrun regular Harry Swinbourne had cause for a double celebration after a blistering performance on Saturday. 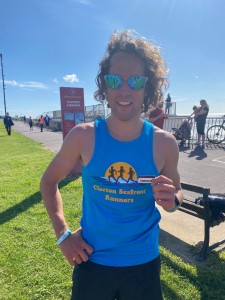 First and foremost, the Great Bentley runner achieved the holy grail of a fantastic new personal best, clocking an impressive time of 18:08.

It comfortably eclipsed his previous overall best of 18:48, set at Harwich, and the 18:53 he managed at Clacton just before Christmas.

Just for good measure, Harry was also first through the finish funnel for the first time, having come second on five previous occasions.

Harry was pushed all the way by Bentley clubmate Mark Jasper, who should also be proud of another excellent time of 18:10.

Michael Garry, from Oxford City AC, made his second appearance at Clacton and came third in a PB of 19:12. It was more than two minutes quicker than on his previous visit, in 2019.

In addition, Richard and Rob (with an impressive 368 parkruns to his name) also had the distinction of achieving PBs.

Saturday’s event was number 217 and 129 people ran, jogged and walked the course, of whom 16 were first timers at Clacton.

Representatives of 19 different clubs took part and, in terms of other significant milestones, Clacton Seafront Runner John Forrest notched up his 100th parkrun.

As mentioned at the run briefing Saturday, I can confirm that we will have a CHANGE OF VENUE  for next weeks 4th June parkrun.  We will meet at the Beach Diner and as it is the first run of the month, we will be running the reverse route, so we will run along the lower prom up the slope onto the upper prom.  The Core Team would love to celebrate the Jubilee and so if you are able to wear Red, White and Blue, maybe a tiara some flags or something it would be lovely to see and celebrate with you all, fingers crossed for the weather.

Please give yourselves extra time to get to parkrun as the area may be busier than usual as the Mad About Theatre will be setting up their stalls and stands along the Greensward.

Mark and myself will now hand over to your Run Director Mel and your Volunteer Co-ordinator Julie.  Have a great week.

On the same day, the female record of 18:32 was set by Daisy Glover.