Guest Run Reporter Michael McGrath has kindly submitted this week's report - it's always great to read about our parkrun from a visitor's perspective.

Major congestion on the M5 saw my sat nav take me off the motorway at Tewkesbury and onto a winding route through four shire counties before I joined the M42, the A42 and then the M1 heading in the direction of something described, vaguely, as ‘The North’.

Three-and-a-half hours after setting off from Bristol I arrived at my hotel in Worksop. Nearby was a pub serving vegan-friendly real ale so I unwound over a few pints, resigning myself, quite  contentedly, to a leisurely 99th parkrun the following morning. 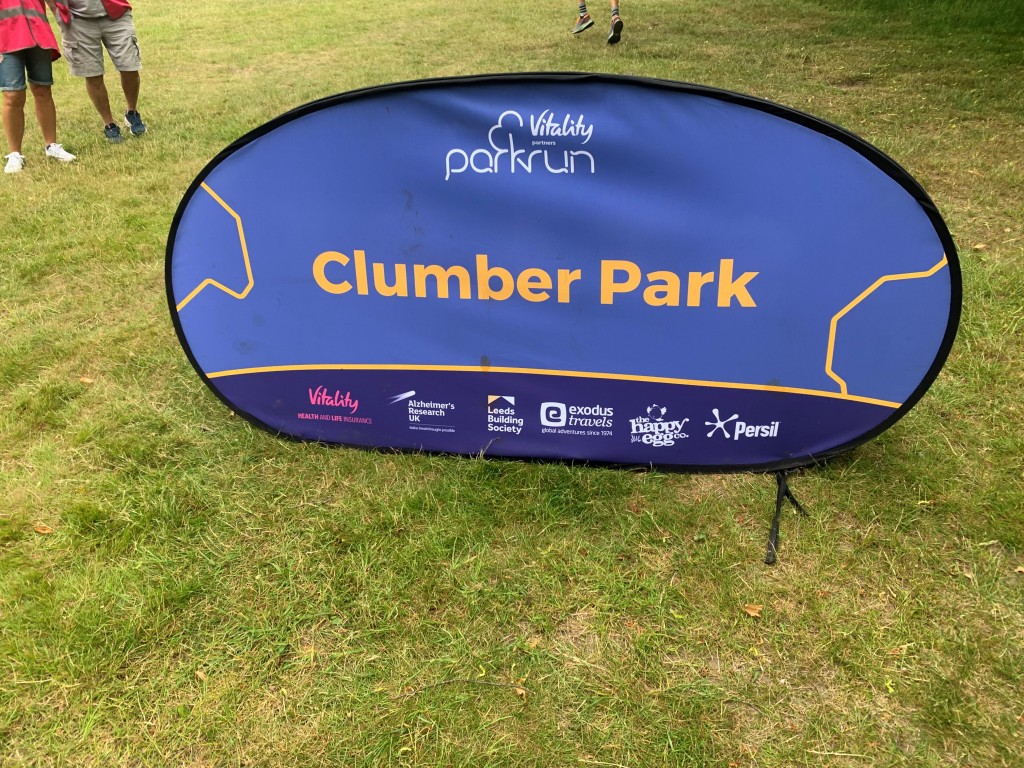 Awakening surprisingly early, I set off for Clumber Park to be met by the grandest imaginable approach to a run. I drove through a large stone gateway and then along a broad road which took me deep into the heart of what is clearly a very extensive estate. I parked in a field, polo-spectator style, though without the expensive car and smart-casual clothes; parkrun’s a bit more relaxed about such matters.

Following the first-timers’ and main briefings held in front of Central Bark café, we headed off past two attractive brick buildings and what looked like an old wooden caravan. 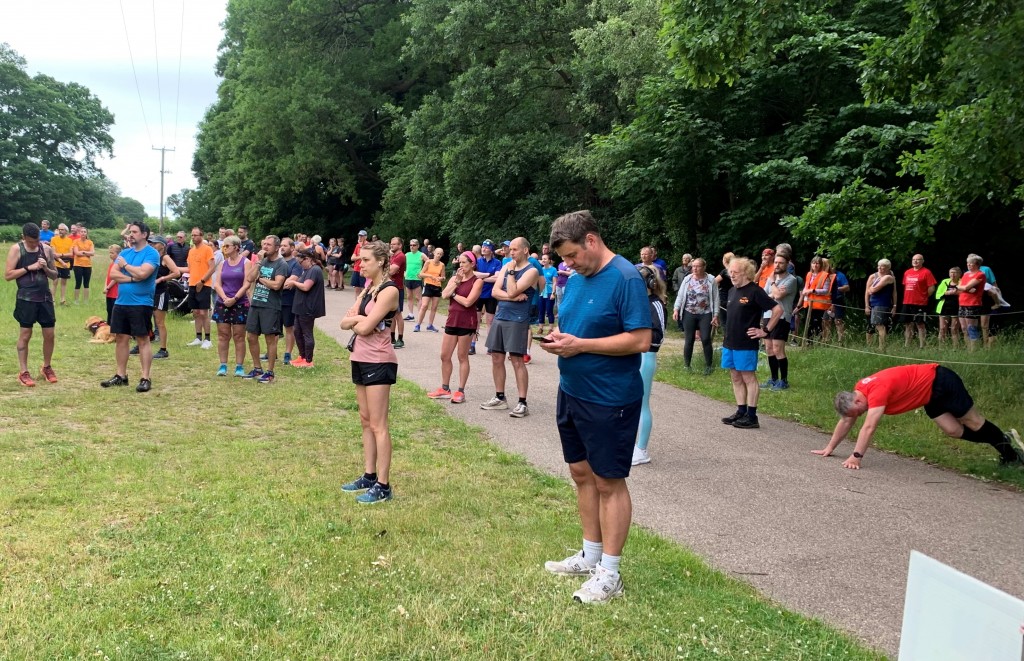 Clumber park parkrun is as near as one gets to a perfect rectangle and after a long outward run along a gravelly path, we turned sharp right into what is a very attractive wooded area, alive with the song of chiffchaffs, which quickly headed downhill to a point with tantalising glimpses of the huge serpentine lake through the trees. A marshal had this lovely place all to himself at what I should imagine is a much-coveted station.

parkrunners eventually emerge into the open, turn left towards a gateway and then right along the perimeter of a huge field in which a few large trees appear like islands in a sea of grass.

An uphill section, through a second wooded area, took us back to the starting point and out again for a second circuit of the course. 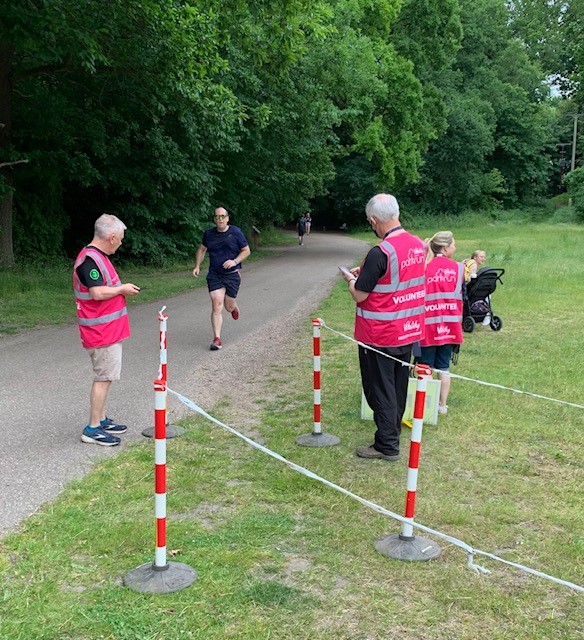 I arrived a week early for Clumber Park parkrun’s birthday, so no cake for me. That disappointment aside, I thoroughly enjoyed my run in this beautiful location and I’ll be sure to return and make a point to have a proper look at the lake. 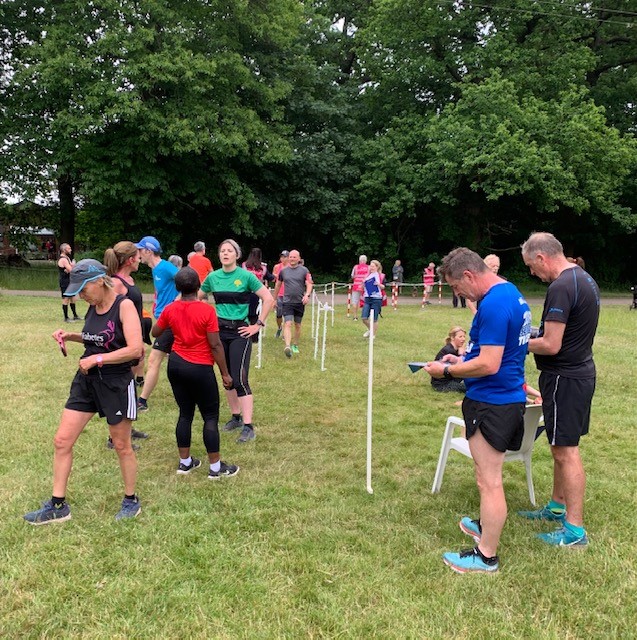 This week, 192 runners, joggers and walkers took part in Clumber Park parkrun and they were enabled to do so thanks to the efforts of 24 volunteers who generously gave of their time for the enjoyment and physical and mental wellbeing of others. 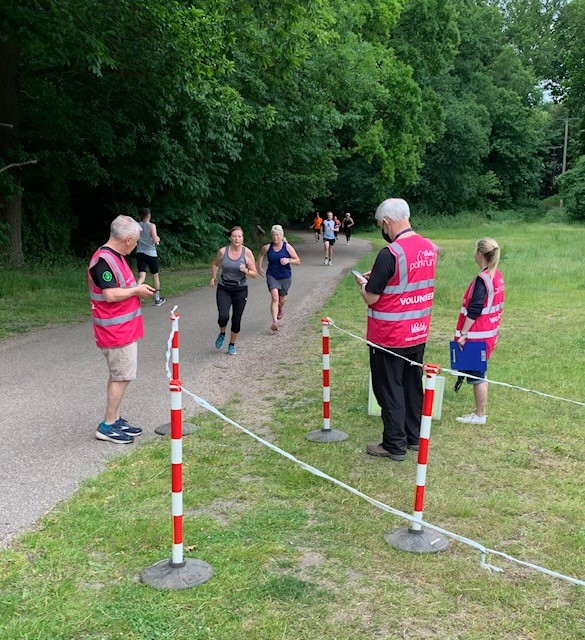 16 personal bests were  achieved and 27 people ran the course for the first time – five of whom were taking part for the very first time. 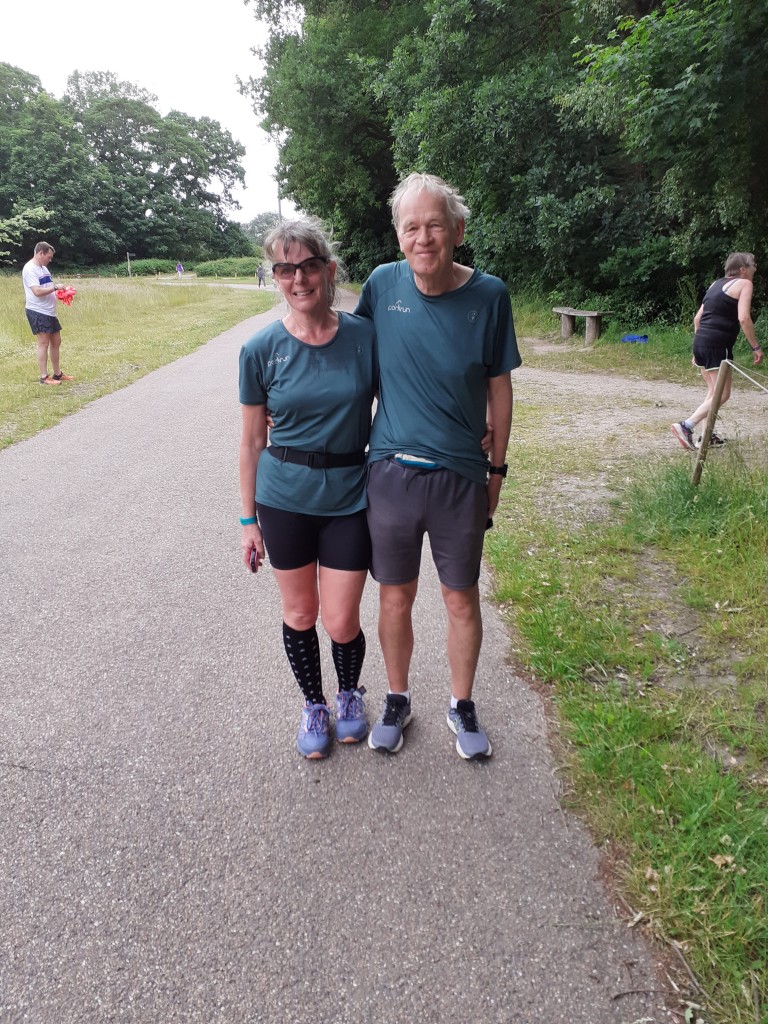 First home today was Jan Bailey who achieved a new personal best time of 16:44. He also claimed the day’s highest age rating score with 86.06%. The first female home was first-timer Sarah Witham of Matlock AC in a time of 20:58. You’ll have seen this was Sarah’s 50th parkrun so it was quite a day for her.

Thanks to Michael for a great run report and here are a few more photos taken by Run Director Roy on Saturday morning: 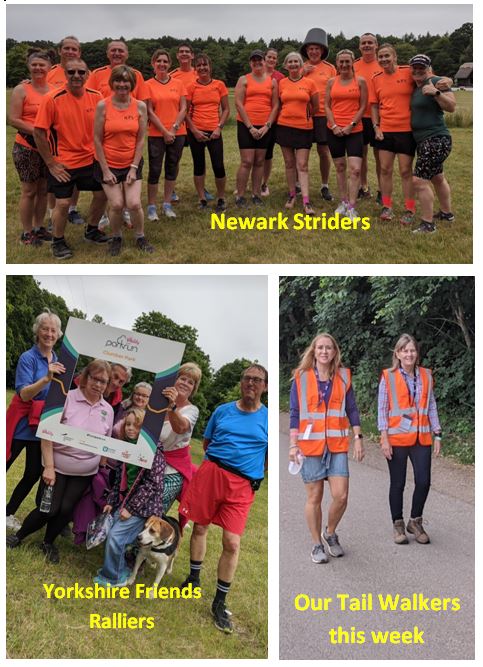 This week 192 people ran, jogged and walked the course, of whom 24 were first timers and 16 recorded new Personal Bests. Representatives of 27 different clubs took part.

It was a lovely sunny day albeit a little blustery! But despite the wind we had 16 people record a PB. These included Netty a regular parkrunner who took 39 seconds off her previous best that she ran last month!! 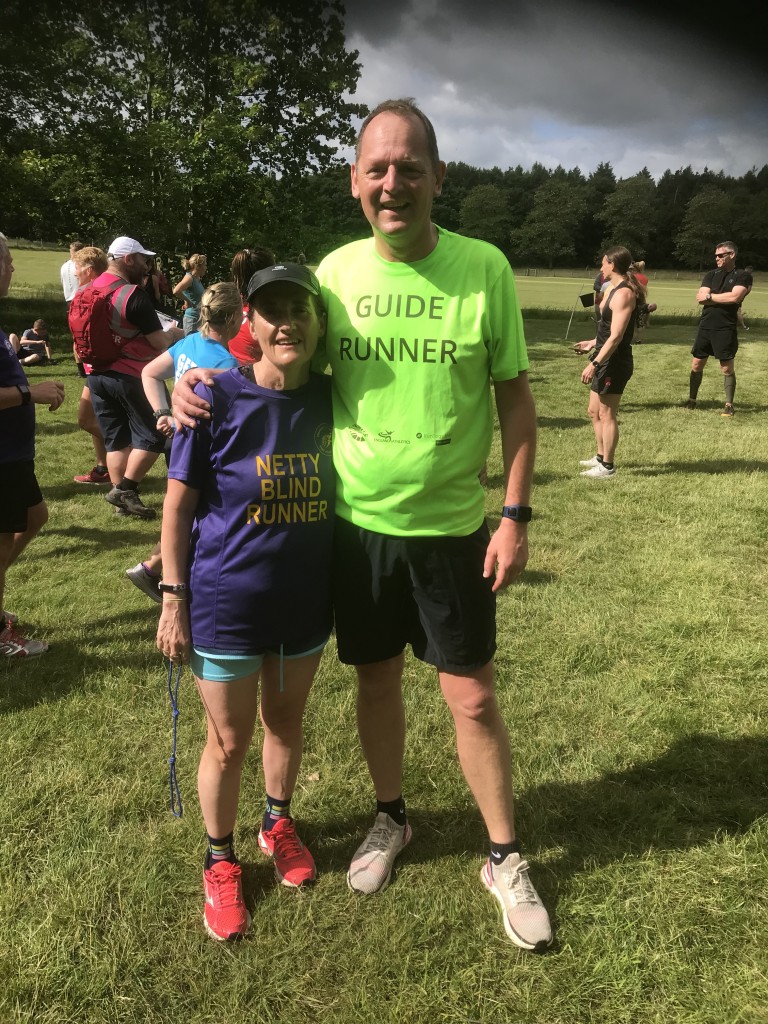 Another athlete on form was Bailey Matthews who completed two laps in 55:05, that's a fantastic effort. 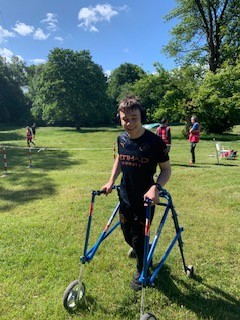 I'm wondering if the thought of cake at the finish inspired this effort? The cake was curtesy of Christine Stevenson who was celebrating her 21st birthday (again). Here's Christine making sure that none of that cake escaped being eaten! 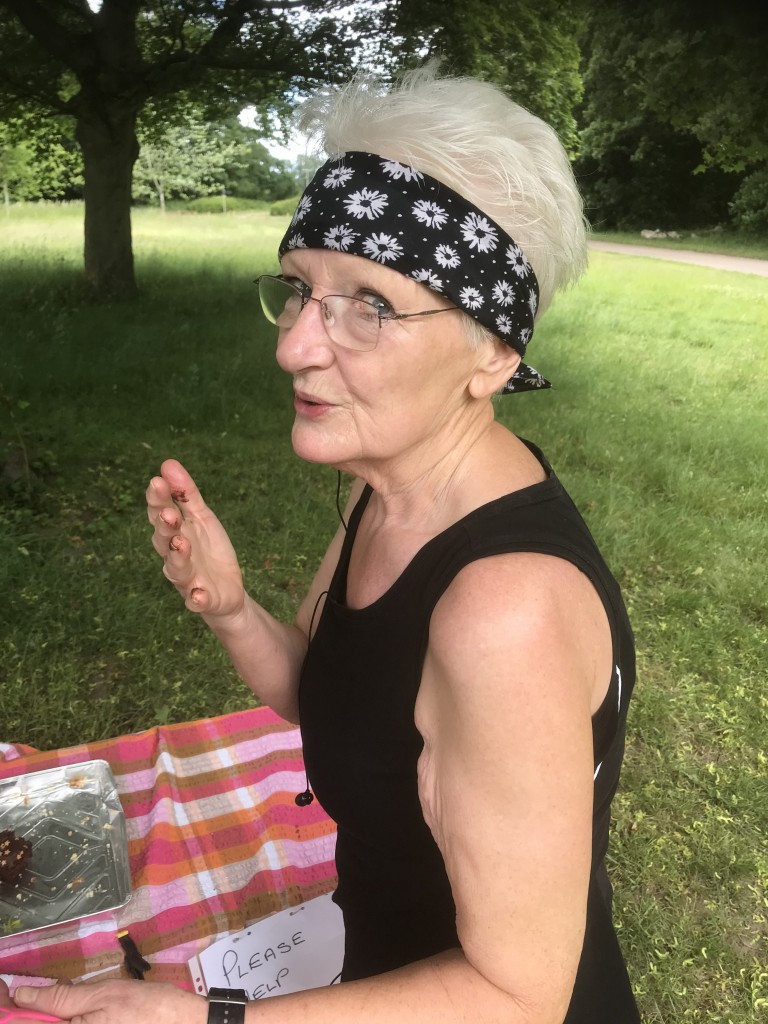 A big THANK YOU to all of the volunteers who helped out today, we could not do this without you. A lot of the volunteers were doing tasks for the first time, so they deserve lots of congratulations for the event running so smoothly and the results processing without incident. 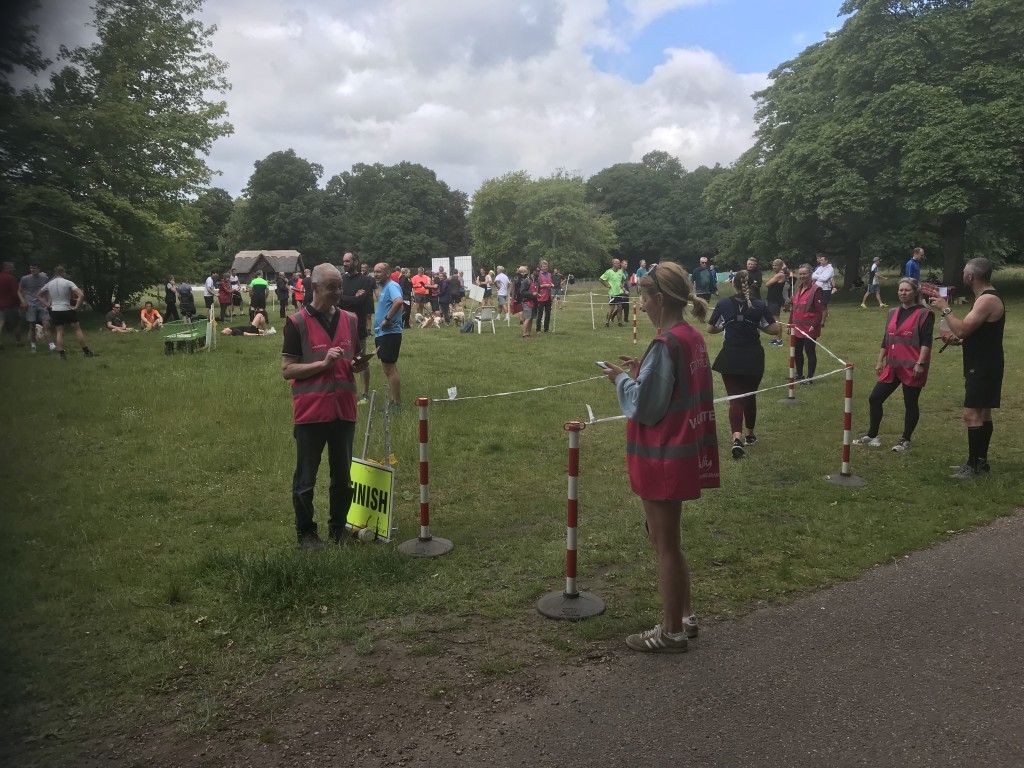 We still need some volunteers to complete next weeks roster, so if you want to join our band of Hi-Viz heroes please email your parkrun Id (barcode) to clumberpark@parkrun.com.

Here are the stats...

This week 238 people ran, jogged and walked the course, of whom 31 were first timers and 16 recorded new Personal Bests. Representatives of 33 different clubs took part.

Today was a day of smiles and celebration, as 257 runners, walkers and joggers, along with 25 volunteers gathered at Clumber parkrun to mark the Queen's Platinum Jubilee as well as celebrate togetherness with thank you day. There was bunting, there was cake and there were copies of the new parkrun magazine.  If you didn't pick one up, there are plenty left for next week.

Our thanks go not only to the National Trust who welcome us into their beautiful park, but to the volunteers who step forward every week to ensure the event can go ahead. With less than 10% of our runners having ever volunteered, this morning's recruitment drive proved fruitful and next week's empty roster was soon full.  We're extremely grateful to everyone who put their names forward and know you'll love being involved as a volunteer, just as much as you do in running or walking. With the holiday season upon us, many of our regular volunteers will be away, so please consider volunteering in the coming weeks.  Simply follow the link to put your name down - Martin will be delighted to hear from you! 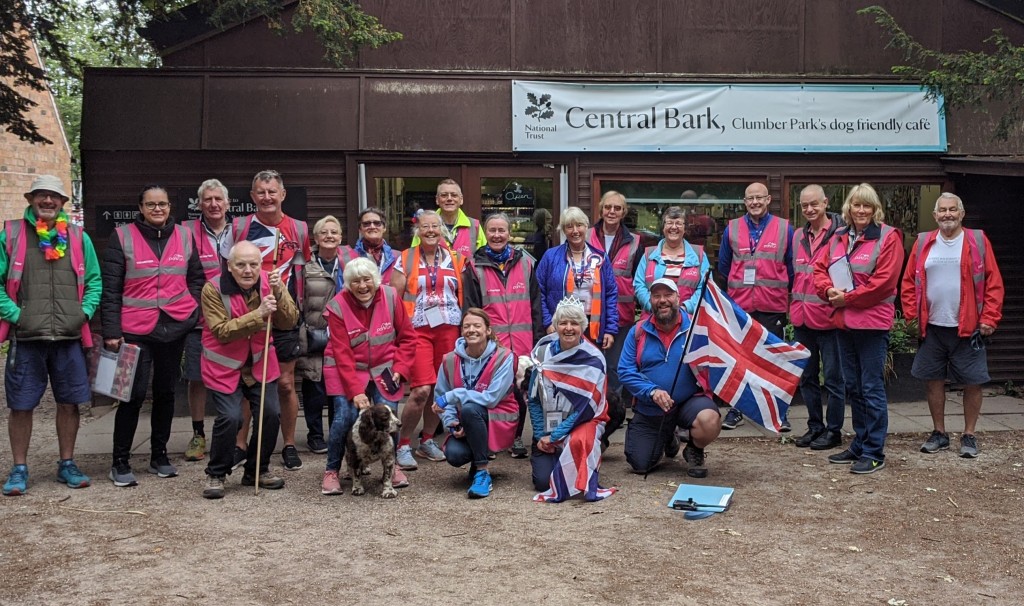 Thanks to the event set up crew this morning who arrived extra early to tie up all the bunting, our finish area looked fantastic. The cake bakers did a great job too - it's been a long time since we enjoyed cake after our run. 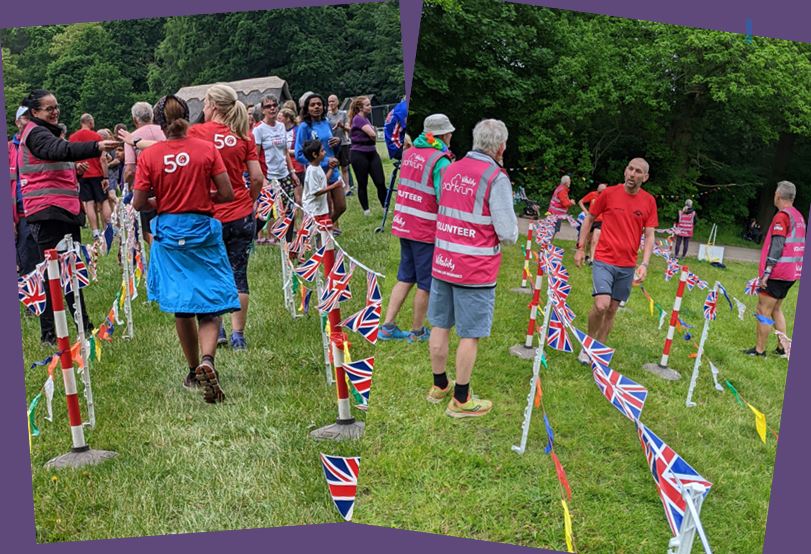 Our theme this morning was 'regal fancy dress or red, white and blue' and you didn't disappoint. 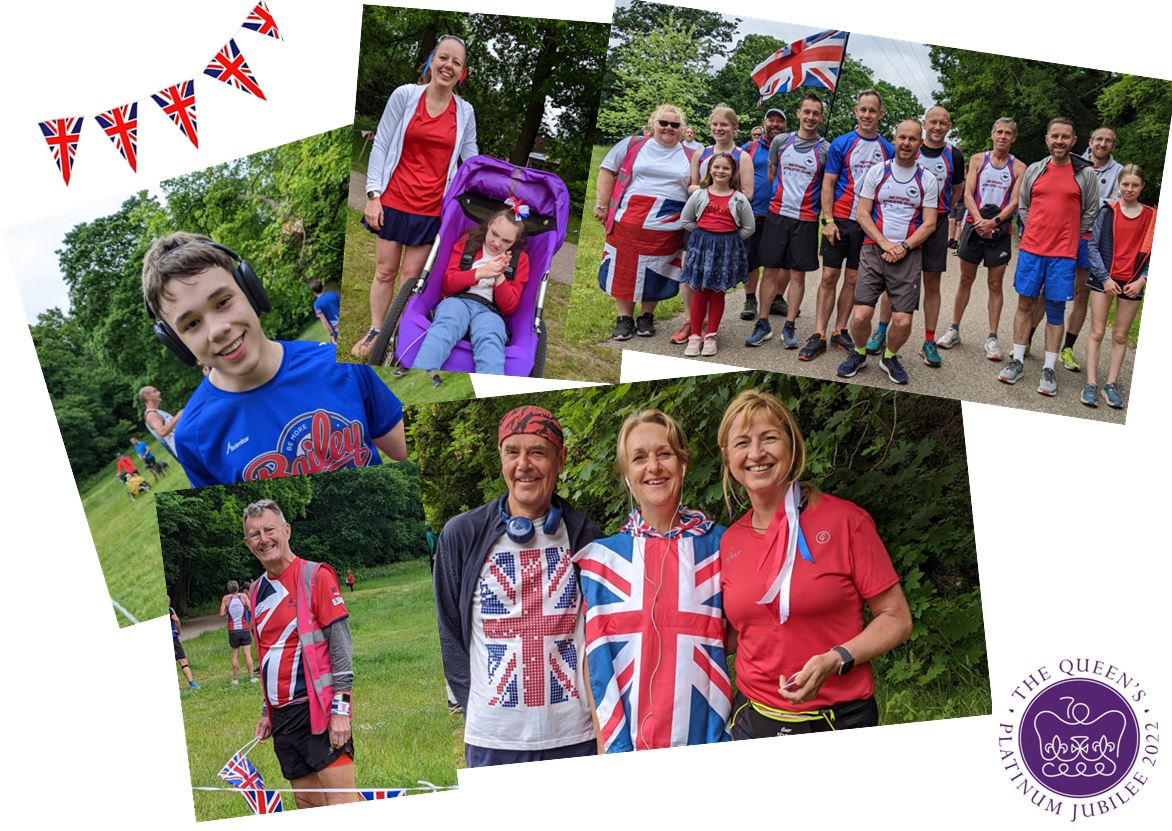 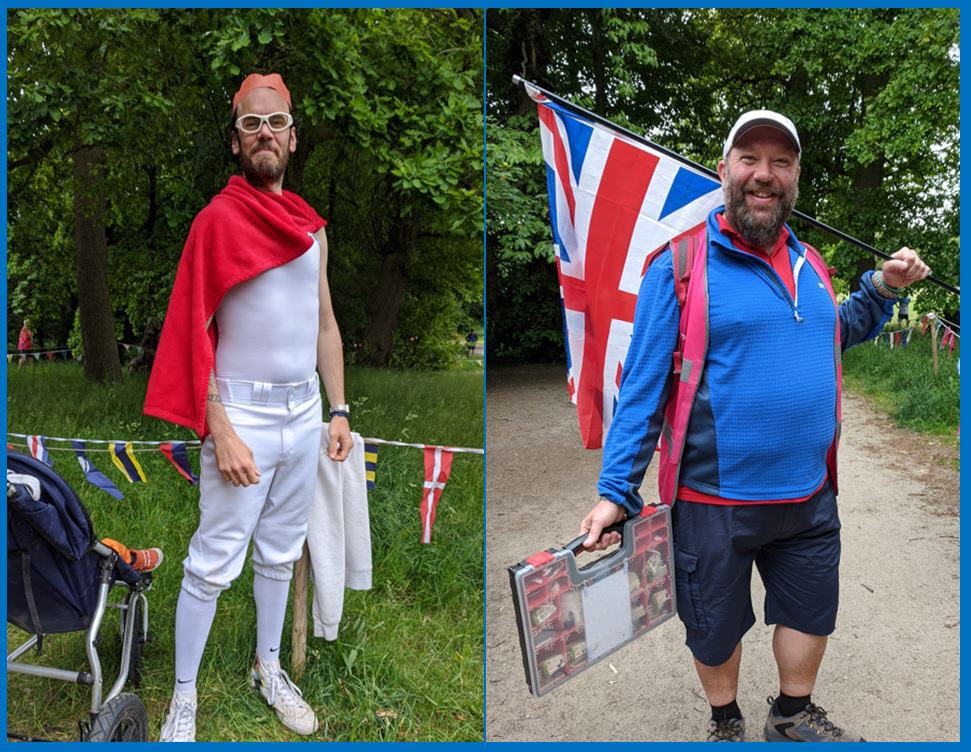 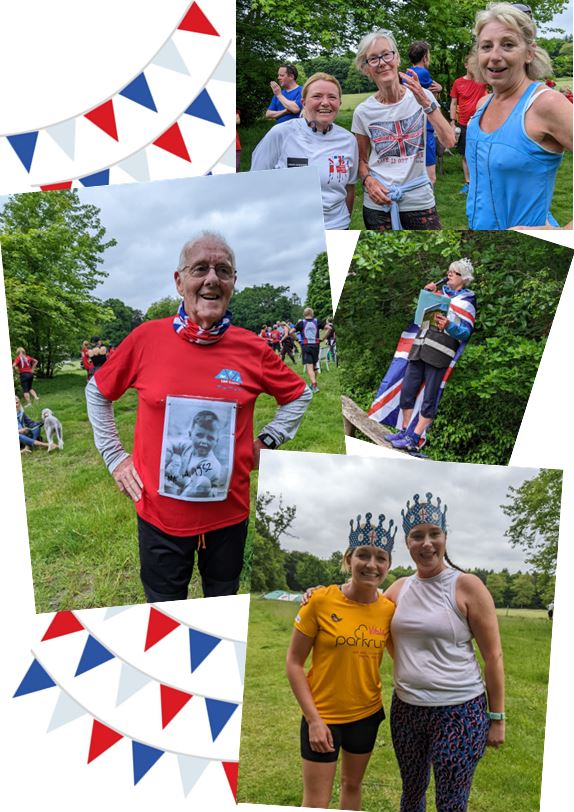 There were plenty of celebrations this morning.  Darren SCHOFIELD joined the 100 club, along with Julie and Andrew KNOWLES.  Cathy MARTIN travelled  from Leeds with her husband Adrian and friend Becki JOHNSON to take part in her 100th different parkrun. 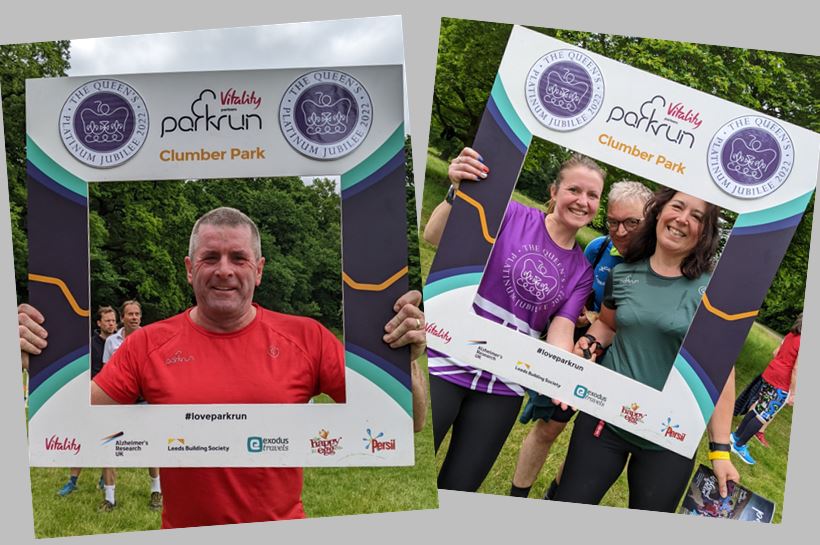 Ten of the first 13 finishers today achieved a PB, including the first three home: Keith SWAINSON 17:08, Daniel REEVE 17:38 and Lewis HOPKINSON 18:12.  Hannah NOBLE put in an excellent performance to be the first female home in 20:36. 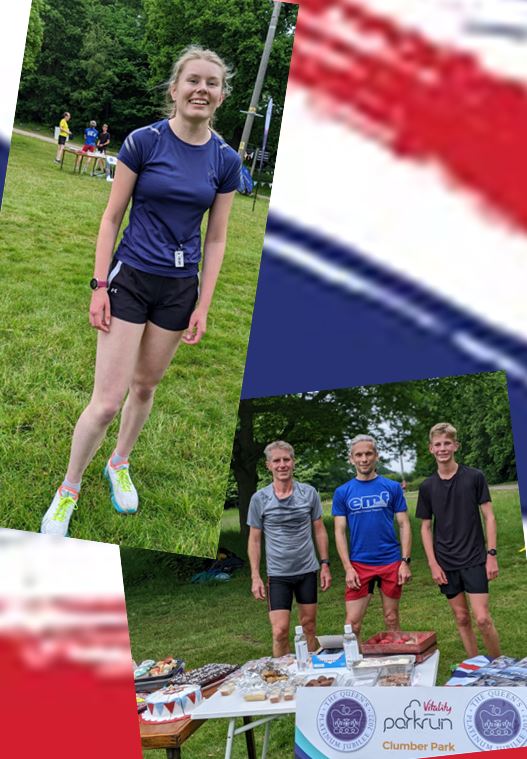 Thanks to everyone for coming and we hope to see you all next week.  We'll be able to celebrate again soon as it's our 9th birthday at the end of the month (where has the time gone)?

Yet another sunny Saturday morning at Clumber parkrun.

This week we welcomed Cindy who had travelled all the way from Australia to be with us, it was her 72 parkrun, thanks for coming to see us Cindy. 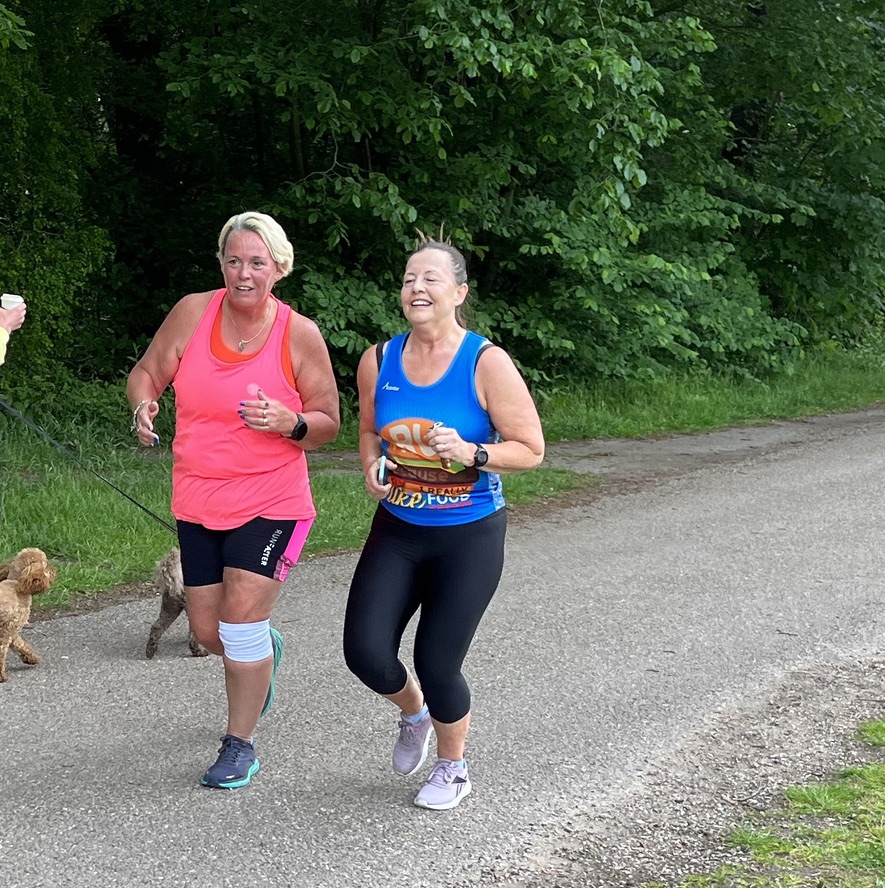 Our first Male runner back this week was Arron at 18:45 and first Lady was Maddie at 23:45 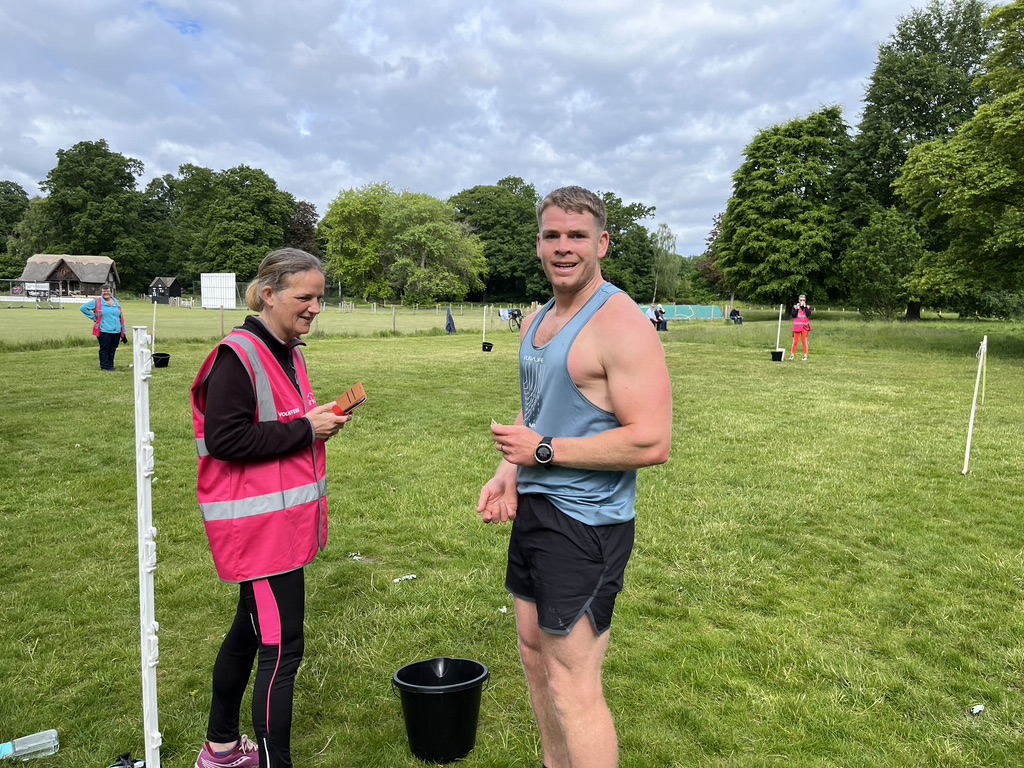 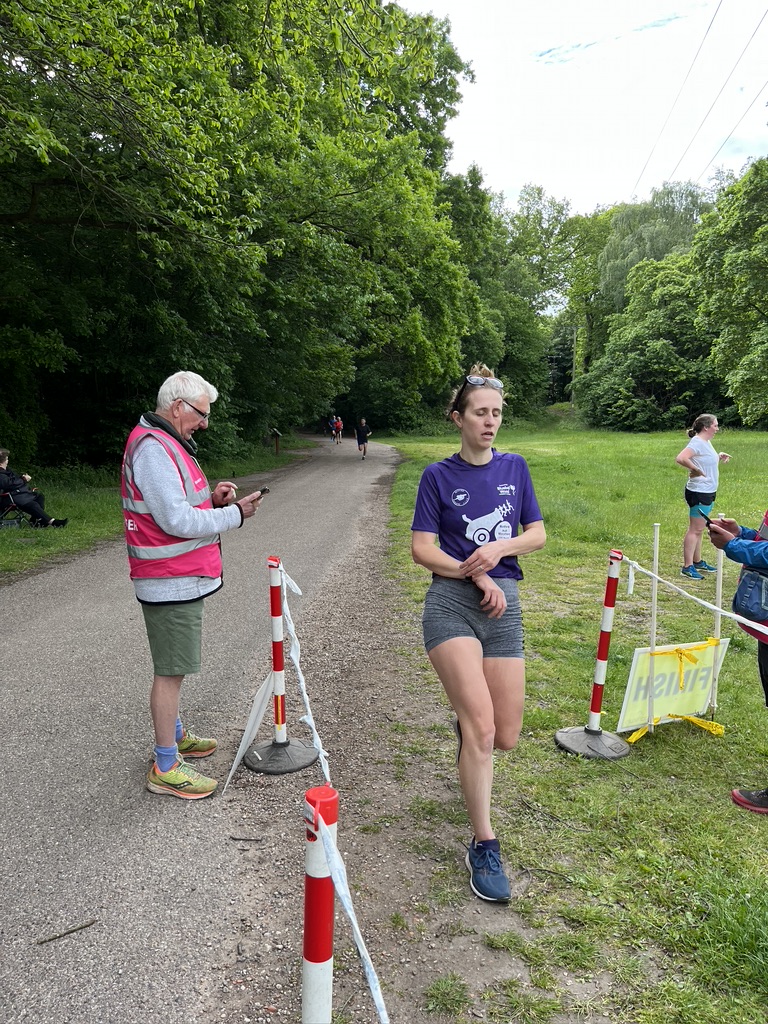 Pam ran her 100th parkrun this week, well done Pam. A great achievement and a regular volunteer too! 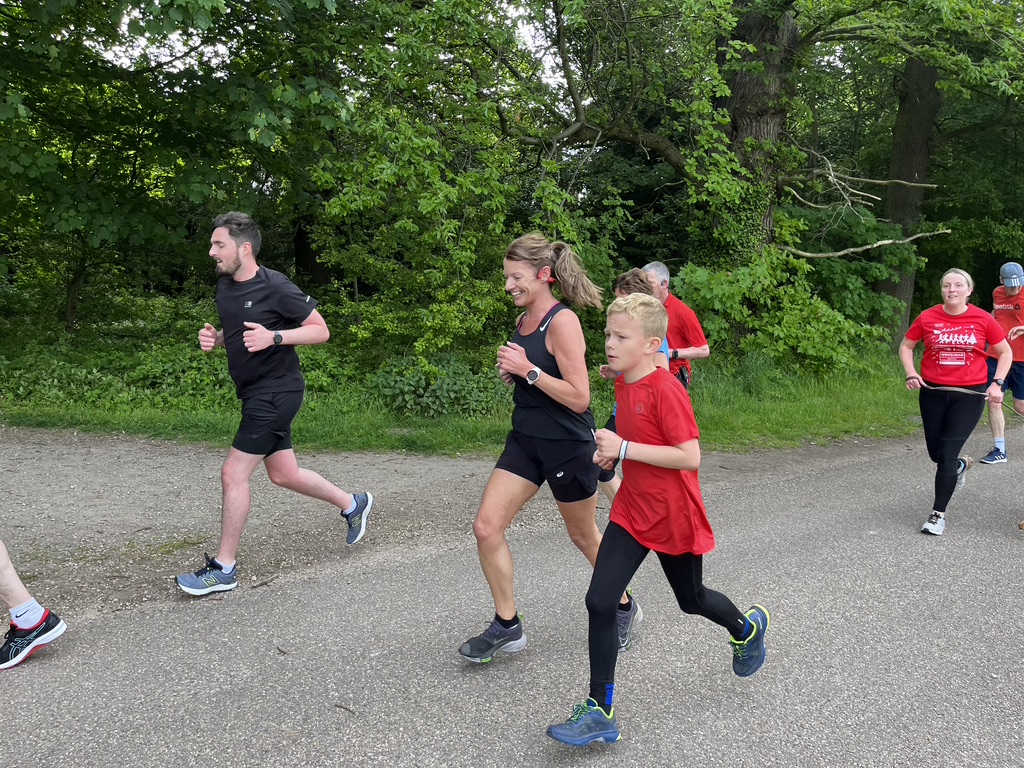 It was also nice to see Bailey back at Clumber 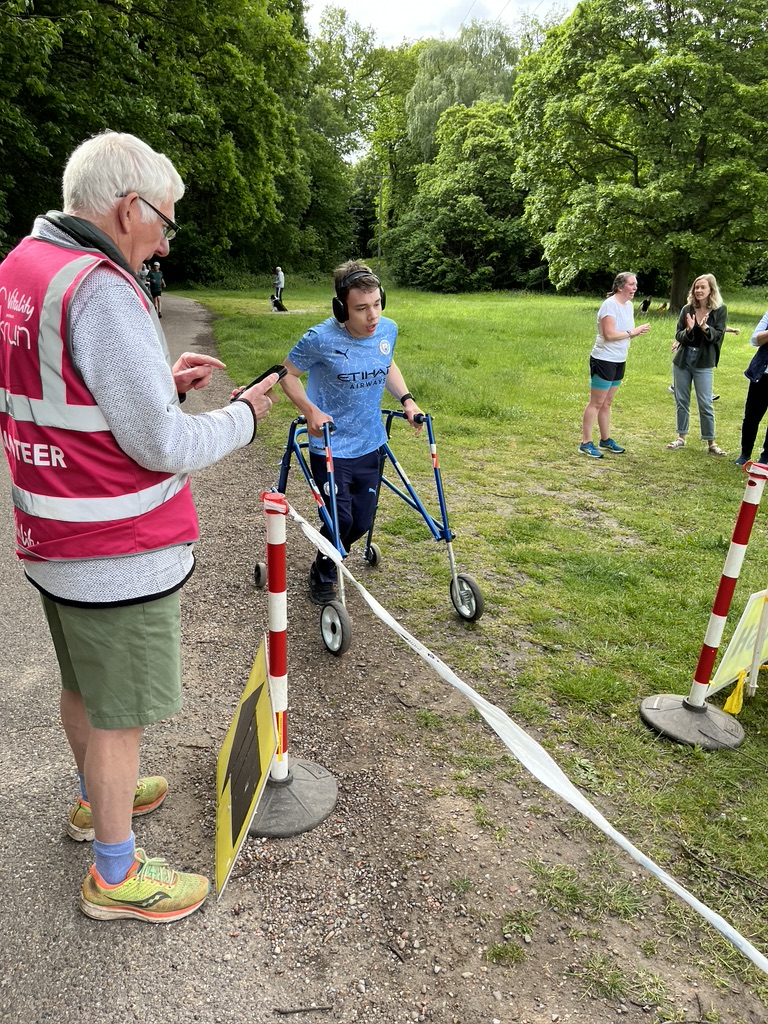 Next week is a special weekend as we celebrate the Queens Platinum Jubilee!

If you've ever fancied dressing up in regal running attire this is the week to do it. Red, White and Blue will do. Please see below your formal invite, RSVP not required. As it might be busy please don't forget to park in the Paddocks Car Park ( first left as you come in through the entrance gate.

If you would like to join in the fun as a volunteer please drop us an email and we can add you to the VIP list.

Until next week, have fun stay safe, see you at 9am Saturday! 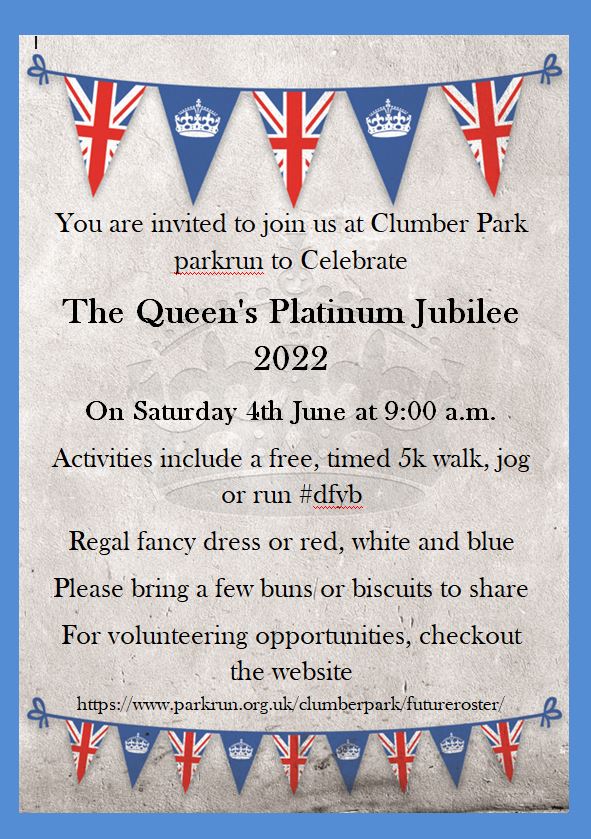 This week 189 people ran, jogged and walked the course, of whom 20 were first timers and 20 recorded new Personal Bests. Representatives of 22 different clubs took part.

Every week someone gets to wave the flag in front of the metal post to stop anyone running in to it. Alan really loves this role as he gets to be cheery with everyone. 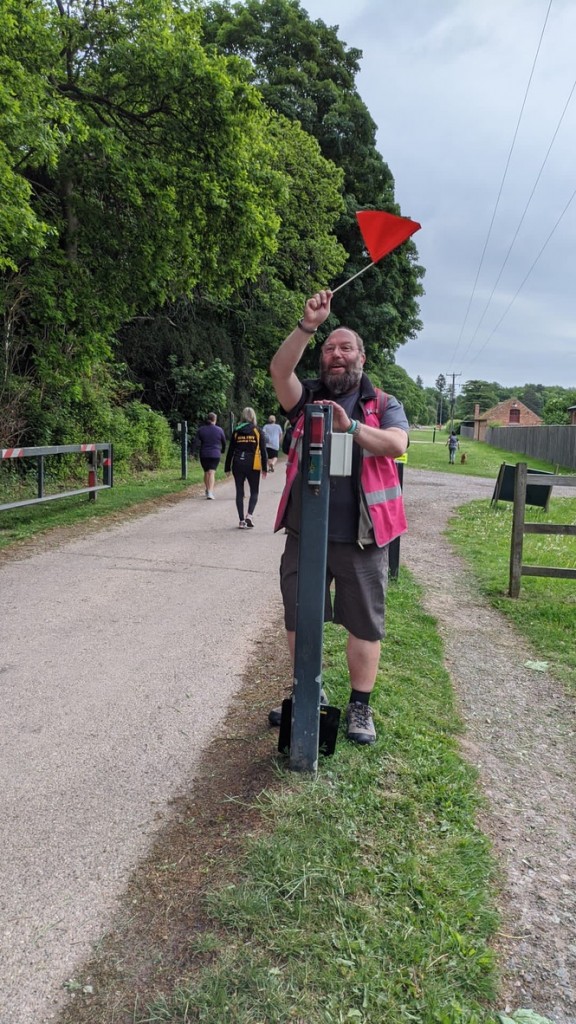 It is quite scary though because this is what you can see from that position..... 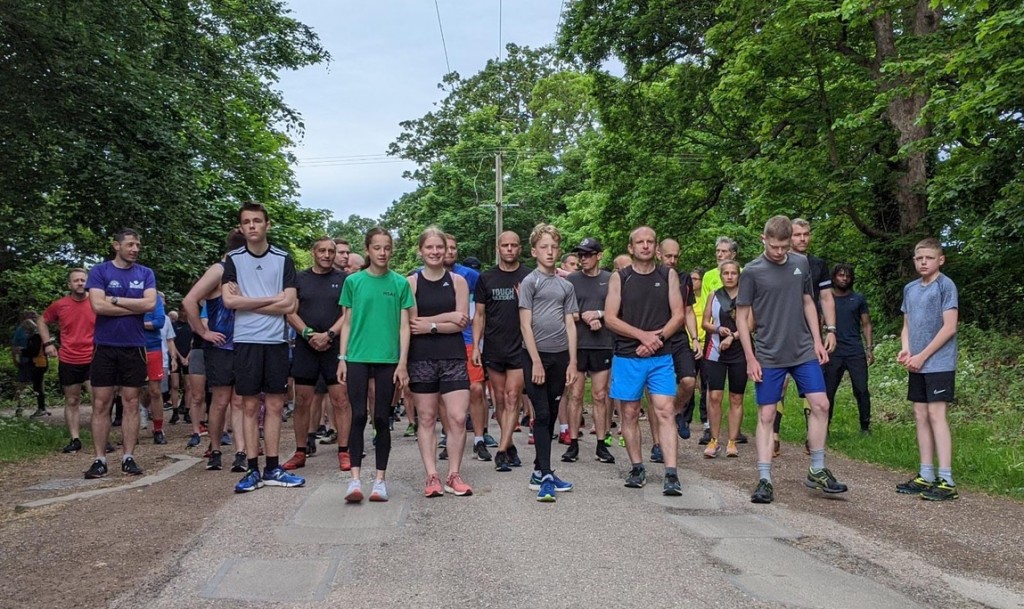 Our runners getting ready for the starting whistle.

This week we were joined by April and her friends and family who were on a Hen weekend and decided to join us! Good luck for the big day April! 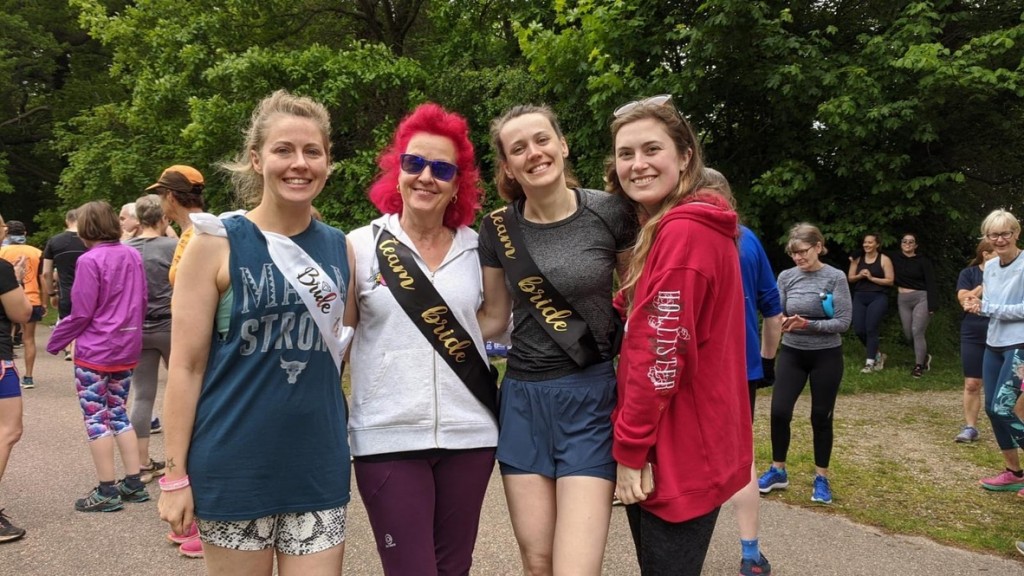 We were also joined by a group from Norwich which included Theresa Flint who completed her 200th parkrun with us, well done Theresa and thanks to Caroline for volunteering to barcode scan. 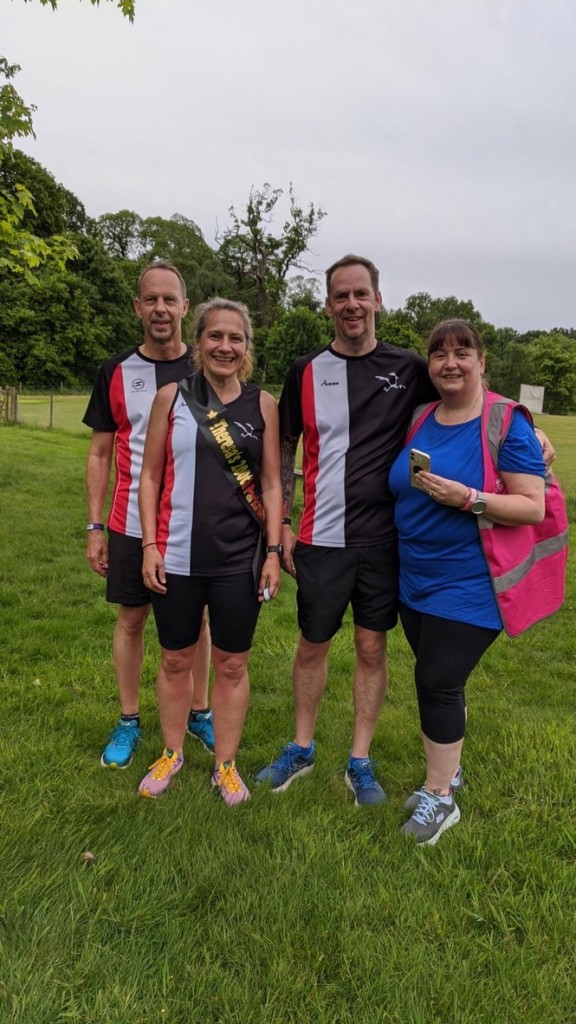 Our first runner back this week was Saimon Kihwele, here he is getting welcomed by our top timekeeping team ( I know! you should see next weeks team) 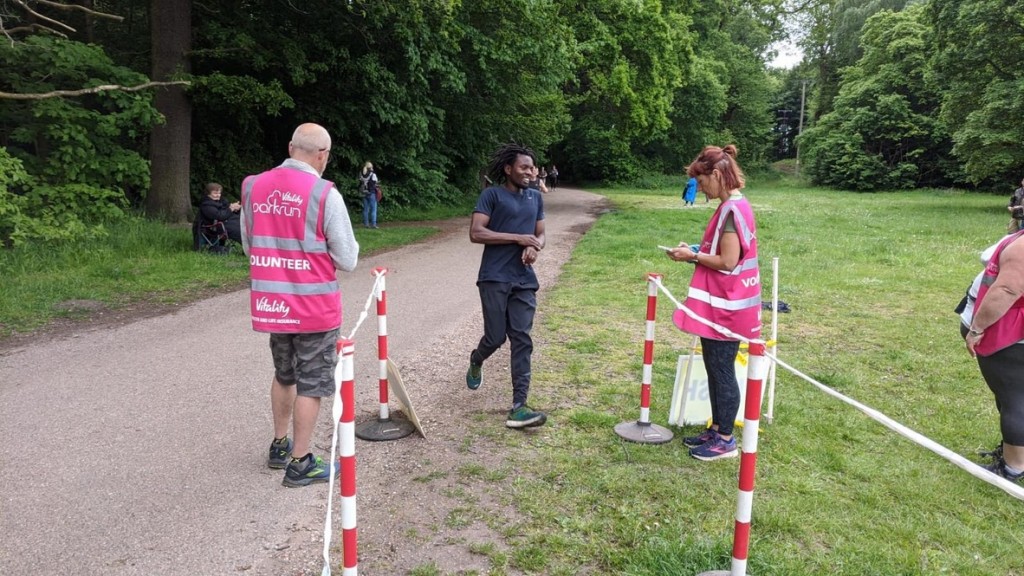 Thats all for now, hope you have a fantastic week, see you same time, same place next Saturday.

And finally the stats:

This week 212 people ran, jogged and walked the course, of whom 28 were first timers and 28 recorded new Personal Bests. Representatives of 28 different clubs took part.