This Saturday we were joined by Tim Gardiner, who not only loves a bit of parkrun tourism, he also likes to write run reports.  There's far more content than your normal team of RD's manage to cobble together, so sit down with a cuppa and enjoy something a bit different!  No photographs this week, other than this one of a rather damp looking chocolate teddy bear, kindly donated by Christine Stimpson for the 250th finisher. 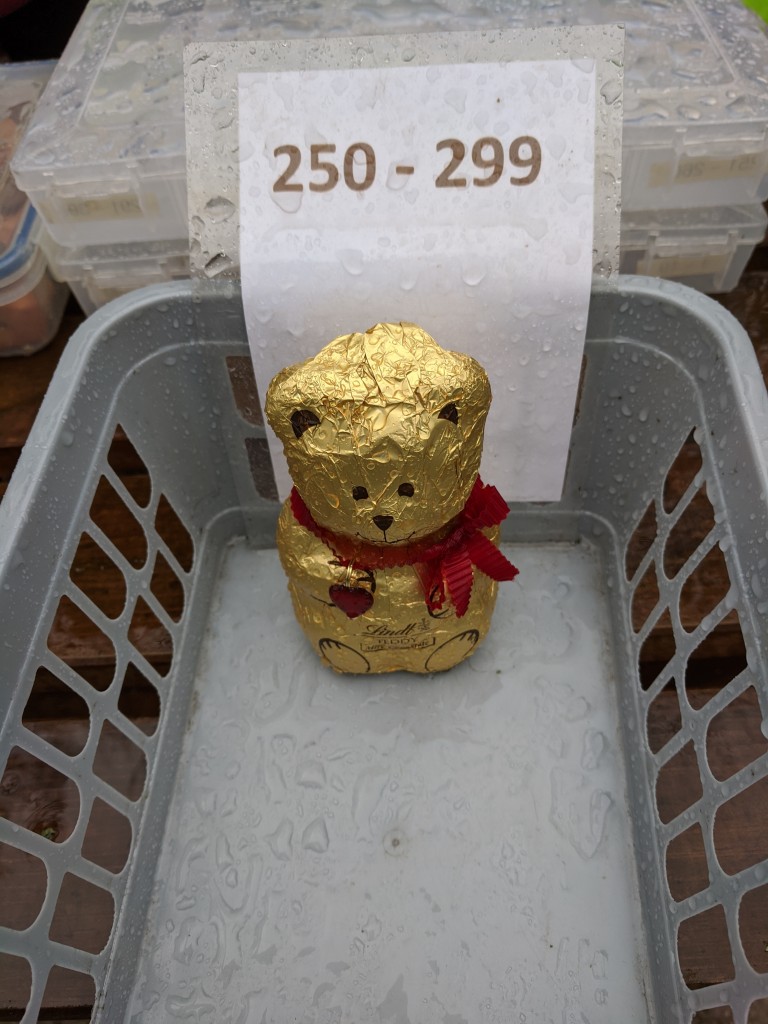 The impending doom of Storm Dennis meant I needed a good Plan B after Bakewell was sensibly cancelled due to waterlogged ground and fallen trees. My good friend Nick Harpur suggested the National Trust’s Clumber Park in Nottinghamshire as an alternative location. Nick’s suggestion was a blinder; Clumber Park is an amazing location. If you like lime in your parkrun, the two mile drive along the lime-lined avenue (1,296 trees to be precise), lends athlete arrival a sense of grandeur. Apparently, glow-worms can be seen after dark, lighting up Europe’s longest lime avenue in summer.

The parkrun is well organised and convivial, there’s even a hut for the volunteers. Central Bark Café is the setting for post-run doggy style drinks and snacks. The course itself is an undulating two lap excursion. The initial stretch passes along a track between trees, before descending through woodland and passing along the edge of a field to the gothic arch of despair (if you went out too fast!). The path then ascends for 40 ft. up a small wooded hill, before a sprint down the other side, where a bell is rung to signal the start of the second lap. The lap bell is a lovely touch and reminded me of the Moors Valley (Dorset) sprint bell.

After Sally Staveley’s humorous run briefing, proceedings got underway in light rain, the breeze strengthening a little during the first lap. Mud was abundant on the off-road sections and the hill delivered its sting the second time! As Clumber Park was my 50th different UK parkrun event, I offered a prize to celebrate. A contingent of National Trust runners were present, so it seemed fitting that the NT first finisher Jago Moles (23:02) should win the signed copy of my poetry book ‘On the Edge’ published by Brambleby Books in 2017. Personally speaking, 115 runners beat the poet (27:09), but crucially I managed to hold off Nick in the sprint finish. He had car keys in his pocket and was jangling more than the Manchester music scene of the 1980s so I heard him coming!

It was great to see a few walkers, including Philip and Tracey Moore who finished with Nordic walking poles in a highly respectable 48 minutes. More should try walking back to happiness at parkrun. I have and it’s great fun trying to beat your personal best while keeping one foot on the ground at all times.

A total of 363 athletes defied Dennis the Menace for the 340th Clumber Park parkrun. The fantastic support of 24 volunteers in unpleasant conditions was appreciated by all. A special thank you to Nigel Dawber, who completed his 100th parkrun as a volunteer. Two runners joined the 50 Club: Gabriela Hernandez Montiel and Amanda Piper, congratulations to them both. Christine Stimpson finished her 200th run, not an official parkrun milestone, but still mightily impressive!

After a tea break, Nick and I went for a 4 mile walk taking in the gothic chapel, grotto, bridge (under repair) and the Roman temple on the far side of Clumber Water. We highly recommend this post-parkrun exploration if you have time, to see all that Clumber Park has to offer.

My weekend away had a dual purpose. parkrun was the prime motivation, but a gig by my favourite Manchester band, The Chameleons, in Holmfirth Picturedrome was too hard to resist. Their stark, jangling guitar riffs and nihilistic lyrics evoke the true spirit of post-punk music. The rebellious nature of the Chameleons would have appealed to the legendary outlaw Robin Hood. The Robin Hood Trail runs through Clumber Park, celebrating the association of Sherwood Forest with the green man. Just for fun, I’ve devised a new challenge. To complete the Joggin’ Hood challenge you must complete all three parkruns in Sherwood Forest: Bestwood Village, Clumber Park and Sherwood Pines. On your final run why not wear some fancy dress green clothing as a nod to good old Robin Hood! And finally, a short poem to inspire you on your Sherwood Forest running or walking adventure:

at the finish
talk is of the storm,
who ran, no one
even mentions
a hooded man

on the log
a green fleece
the only reminder
I wonder if anyone saw
the funnel ducker?

This week 363 people ran, jogged and walked the course, of whom 57 were first timers and 52 recorded new Personal Bests. Representatives of 45 different clubs took part.