There is only one place in the world where you can see more aloha shirts, grass skirts and lei than in Hawaii itself, as well as more PBs and records than the olympic games! That magical place is of course Colwick park on Hawaiian shirt parkrunday!

372 parkrunners joined in the fun, with 37 first timers and tourists, 46 athletes recording "normal" PBs and 35 athletes taking part in fruit-related PBs, some very tropical, other less so. Like Hawaii, Colwick attracted both domestic and international tourists.

Thank you to all our volunteers who went the extra mile to make Saturday so special.
Tim and Sandy were your timekeepers, Thomas, Isobel, Dawn and Joanna were your barcode scanners, and Joanna also recorded your tropical fruit record attempts with the accuracy and rigour that such an important task requires. 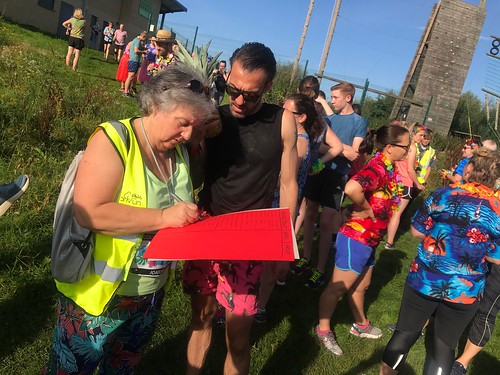 Superkev performed an early check of the course. The Superkev camp has not revealed whether his course check was carried out with or without fruit, but he is known for being committed to his training and run preparation, and a trial run around the hairpin bend to assess the effect of the sizeable guavas on aerodynamics would have no doubt stood him in good stead as he cruised his way round to a double guava course record.

Helen H. handed out finish tokens and Tony, Philip, Tracey, Hilary and Harry were your marshals. Helen J. did the first timers brief and Frances signed the briefings. Caitlin combined RD duties with fruit record adjudication and Nic sorted tokens.
Your tailwalkers were Graeme, Helen, Morag and Lyndsey who completed her 100th parkrun in style.

Abi guided Terry around the course to complete a "wonky papaya PB" (upon further clarification, I'm reliably informed it's the papaya that's wonky, not the PB or even Terry, whatever the evidence might suggest).

Megan took pictures, soon to be uploaded on Flickr.

Roy checked that standards hadn't slipped since he last manned the split, and he and Jacqui added just a little bit more sunshine to our Saturday morning. We were at last able to present them with John's fantastic drawings. If ever proof was needed of what a fantastic community Colwick is, that was it!

The RAC improvers group demonstrated once again that they don't shy away from a competitive challenge as Paul and Andrea Kelley, Ali Browell and Pauline Gandee (aka "team fruit salad") took the crown in the two mangos, a lemon and a lime team event.

Several physalis PBs were recorded (after technical consultation, a cape gooseberry was deemed to fall within the physalis category), so congratulations to Jackie Measures, Hannah Roberts and Anna Hager.

The event team are pleased to report that following a thorough investigation into last year's irregularities, we are now confident that we have taken adequate measures against on-course consumption, and spot tests were carried out to ensure fruit crossed the finish line intact. Finish-line photographic technology was used to assist our efforts to eradicate such unsportsmanlike behaviour, and the following picture supported the validation of fruit-PBs by John Suthern (whole pineapple), Chris Jeckiel (banana) and Claire Hayes-Gill's (nectarine). We are also pleased to confirm Christine Heaton's olive course record and Julie McGeorge's sugar cane course record. However, Stephen Shanks's 2017 pineapple course record remains.

Bernard Jarvis defended his title in the filled plastic pineapple, but keen followers may have noticed a slight change in technique from jelly babies to pick'n'mix. Bernard assured the volunteers that he had an up to date JCB certificate, so it was absolutely okay for him to be handing sweets out to kids (and some grown ups too) from his now famous plastic pineapple. Who knew he was qualified to drive a digger? A man of many talents, to be sure!

David and Rita Robinson celebrated their 250th parkrun in the company of family, friends, a dolphin and an alligator. 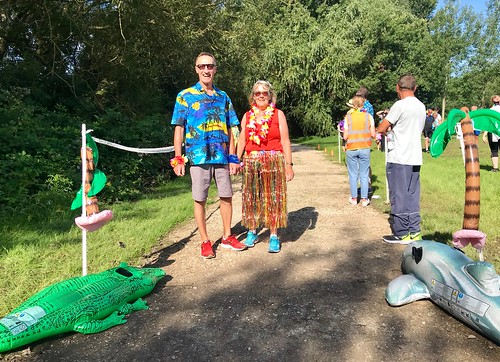 Eileen O'Reilly completed her 250th parkrun, and Libby provided us with a glorious cake to eat alongside all the delicious tropical fruit.

This year saw the introduction of a new category by trailblazers Steve and Evie Dickens: the Hawaiian half-pizza relay. They showed great agility and coordination as they passed the pizza box from one runner to another without losing a single pineapple chunk or piece of ham. Their course record will no doubt remain unchallenged for years to come, as few have sufficient commitment to the sport to eat half a hawaiian pizza as part of their parkrun preparation.

The best dressed award goes to Claire Hill. Not only did the umbrellas on her drink match her dress perfectly, but she now also holds the course record for running round with a lime and jelly cocktail. She was joined by Zoe McVinnie who demonstrated creativity and innovation in the already crowded pineapple category to claim a pineapple sponge record. Perhaps she will inspire a new generation of athletes to attempt the pineapple sponge cake? We sincerely hope she does. 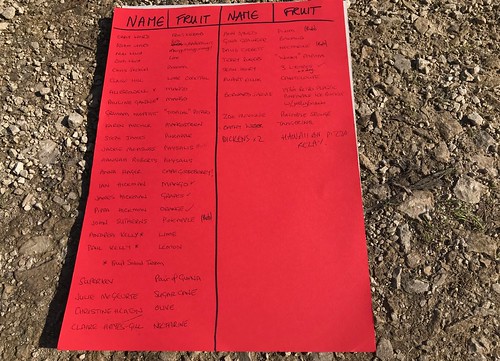 The presiding judge regretfully announces that Graham Moffat's "tropical potato" course record will not stand, on the basis that you wouldn't want a potato (cooked or raw), or even the juice of a potato in your fruit salad. Better luck next year coach Moff.

Will next year see a return of the tomato or the date? With the contentious inclusion of sugar cane this year, will next year's presiding judge allow the potato? Will Superkev dedicate the next 12 months to sourcing weird and wonderful fruits (pitaya, cherimoya, jujube)? I guess you'll have to turn up to find out. But you only have to wait until next Saturday for more parkrun glory. #syatb #dfyb