With flooding around the East Midlands and several local parkrun cancellations, we were delighted that the pre-event course check found nothing more than a "normal for Colwick" level of puddles and mud. However, the adverse weather conditions during the week clearly discouraged a few people and the lowest parkrun bingo guess won the prize (well done Maureen!).

At 8.30 the volunteers were freezing and shrouded in mist, but by the time the bell had been rung and the athletes were on their way, it turned out not to be such a bad day. Pale sunshine and autumn colours made up for wet, muddy feet.

148 people ran, jogged and walked the course, but special congratulations go out to the 13 first timers who braved the weather, and to the 7 who recorded new Personal Bests. We welcomed smiley tourists from London and Pontefract.

We were a bit worried on Thursday when the volunteer roster still had some gaps, but some lovely people stepped up. A huge thank you goes out to all our high-vis heroes, who perhaps on days like this should be called "wellington warriors".

Tim checked the course, Claire H. briefed the first timers and marshalled the car park, Tina, Claire O. and David put out all the signs and cheered the athletes from their marshal positions. Caitlin was your RD.

Steve J. and John timed you over the finish line, and Dawn and Rachel stood in the funnel puddle for an hour to make sure you all got tokens and stayed in order. Steve S. took his clipboard duties very seriously, and Grace and Megan scanned your barcodes with youthful charm.

Andrew took some beautiful pictures of our athletes approaching the finish line. He also took this picture: 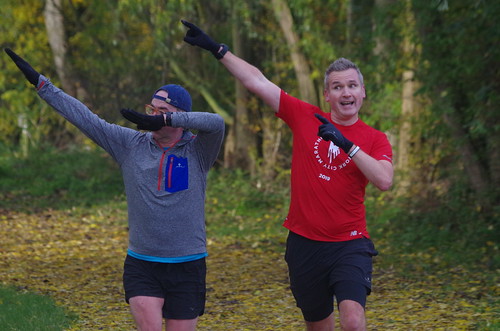 All the pictures from the day can be found on our Flickr page.

Our tail walkers were Maureen and Ian. 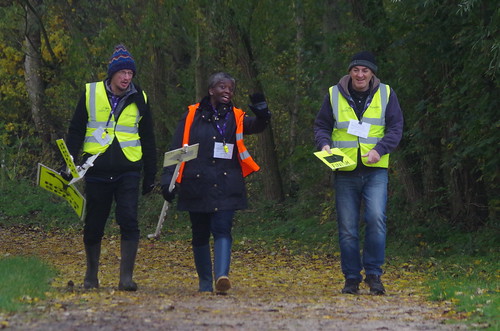 We are also pleased to announce that two items of lost property were reunited with their rightful owners who waited patiently until the end to check the lock up. We have a stripey top and a puffer jacket still up for grabs! The other unclaimed items are now making their way to people who really need them at The Eat Team Soup Kitchen in Sneinton.

And of course, it all finished at the Daleside, where warm drinks and breakfast cobs were consumed, toes were warmed, results were processed (by Caitlin), tokens were sorted (by Niki), and dogs were petted (by Tim). It's a tough job, but somebody has to step up, eh Tim?