This weeks run report - a story of milestones, 'inclement' weather, but lots of smiles regardless!

On opening the curtains this morning the revelation was some quite heavy rain at 7am, and the phrase “hmmmm could be a wet one” may have been one of my first thoughts of the day… But despite our pre-event volunteer swimmers - I mean volunteers - getting wet while setting up, come 9am the rain stopped and all that was left was a rather wet Conyngham Hall parkrun course, with maybe a small dose of muddiness thrown in for good measure...

It didn’t seem to dampen any enthusiasm and 105 happy parkrunners all took on the scenic and undulating course. We had 40 first timers, and 3 people completely new to parkrun chose to make their parkrun debut this weekend with us. Welcome!

Our first finisher, Jonny Reep, was a first timer to the course although completed his 153rd parkrun in the meantime. He just pipped our most prolific first finisher (with 5 first finishes to his name), Tom Calvert, by a few seconds. Tom also recorded his 150th parkrun, along with Ian Pickles and Annabel Gratton who both joined us as first timers and both also recorded their 150th parkrun. While not an official milestone they do deserve a shout out for what is the equivalent of nearly 3 years of consecutive parkruns. They are now both nearly half way to Vicki Deritis total, who I noticed was a first timer today with us, and has a mighty 306 parkruns to her name. Good going all!

Also despite the ‘damp’ conditions we had 14 new PB’s this week. Impressive stuff.

We had the balloons out in force for Denise Cullingworth who achieved her 50th parkrun, and now has the coveted ‘50’ symbol next to her name in the results. Well done Denise! 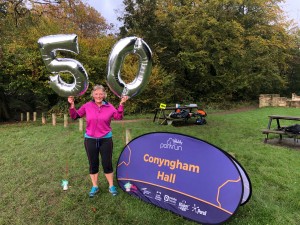 We elected to run the ‘C/B’ course again given the conditions, and from now on will consider this the ‘main’ course for the winter at least. I did notice that the bridge was particularly slippy today though, and while everyone got around fine I want to just remind everybody to take care if the weather is a bit more ‘inclemental’. 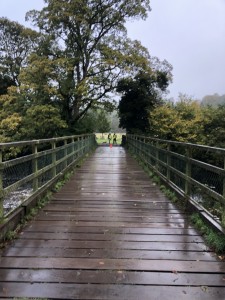 Next weekend it’ll be our spooky parkrun, as it’s a few days out from Halloween. So don’t forget your fancy dress, and who knows… maybe the Troll from Troll Bridge may even make an appearance…! 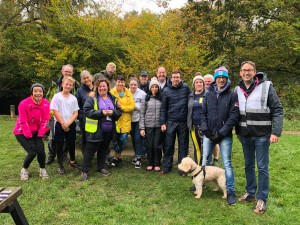 Our Event Director Linda is picking up the reigns for next weekend, so have a good week all and see you all at the ruins next Saturday. DFYB!

Here’s the stats for this week…:

This week 105 people ran, jogged and walked the course, of whom 40 were first timers and 14 recorded new Personal Bests. Representatives of 26 different clubs took part.

Today's full results and a complete event history can be found on the Conyngham Hall parkrun Results Page.

Conyngham Hall parkrun started on 18th May 2019. Since then 1,603 participants have completed 3,030 parkruns covering a total distance of 15,150 km, including 518 new Personal Bests. A total of 142 individuals have volunteered 398 times.