How did you get started at parkrun?
I started my parkrun journey in Harrogate about five years ago. I had not long completed the NHS couch-to-5k by myself and started running with a friend of mine who was doing parkrun; he suggested I come along as it was a good way of improving (after all, it is free, weekly & timed!) and I would know a few people there as well to chat to. The rest, as they say, is history. I have now run 100+ parkruns at 21 different parkrun locations across the country, plus volunteered on over 50 other occasions as well. Little did I anticipate in those early days that I would end up as one of the team of Run Directors, initially at Harrogate and now at Conyngham Hall.

What does parkrun mean to you?
parkrun has definitely contributed to my love of running but as the nature of that has changed over the years, so has my view of parkrun. It has gone from that initial, self-focussed ‘how to be a better runner’ to more of a community focus… in a running context. To me, first & foremost, people matter; so inevitably parkrun has become far more about the people and less about the running, although that is still a big part of it for me. It’s about friendships old & new, the parkrun & local communities and the positivity, openness and inclusivity of the whole thing. I still get inspired by the age range of people taking part, from the youngest of juniors up to those in their 70s+, all mixing and encouraging each other on… brilliant! And as a bonus, I get to visit other parkruns across the country when I can, enjoying the different nuances of character each one has. Oh and the coffee, I mustn’t forget the coffee!! Hmmmm coffee…..

Do you have a favourite volunteering role?
Aside from the expected RD answer, I find myself going back to Barcode Scanning quite a bit. I think it’s a privilege seeing such a variety of people when they’ve given it their all and finished; you can see the look of accomplishment in people’s eyes. Love it.

What did you do on Saturday instead of parkrun?
Apparently, there is a Saturday morning outside of parkrun. I didn’t believe it myself but have now found it to be true (not as good though)! I make sure I get at least a 5k run in, sometime, somewhere away from any parkrun course. I try to do so at 9am but the lure of the lie-in is strong in this one! I must admit to enjoying not having to get over St. Arbeck railway crossing before the red lights of the barrier start flashing, in time for Conyngham set up at 7:35-ish; I wasn’t always successful.

Do you have an amusing/odd/wonderful parkrun anecdote to relate?
You mean apart from being late for set up because I am stuck at St Arbeck crossing…? On only my 2nd occasion Run Directing at Harrogate, we had a record number of people (500+), followed by discovering the finishing tokens were out of sequence on the holder but having them put back in order very rapidly by Sean Brennan & others before the first runner appeared, followed by getting interviewed for the With Me Now podcast about parkrun, followed by stopwatch problems meaning an “interesting” set of downloads to put the results together from. I wouldn’t have managed it without the wonderful Sean, Caroline Rainbow and others. It was a real baptism of fire that day but, whilst being a near vertical learning curve, it was a great demonstration of the teamwork you find within any parkrun core team.

Do you have a favourite parkrun photo?
The favourite photo is from the inaugural Conyngham Hall parkrun, immediately prior to the 1st run brief & 1st start. 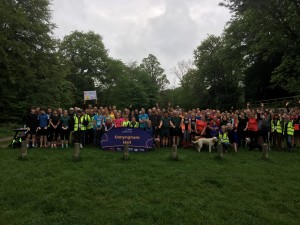 A lot of work had been put in by so many people (especially Linda!) and to finally have our own parkrun up and running in Knaresborough was a very special moment.

The second is the “oh £$%*” moment when the tokens were found to be out of sequence.. 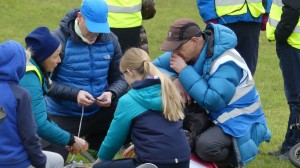 The third is one of the founding principles of parkrun – a drink in the café afterwards with friends. 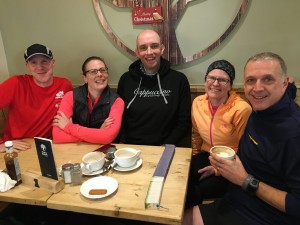