Over 150 parkrunners made it out of bed on a cold but beautiful sunny morning on Saturday at Cross Flatts to get their park run fix for the week.

Gathering at the start for the usual briefing, there was a slight breeze in the air. Certainly it felt like the calm before the storm, with Storm Ciara predicted to give Leeds and the UK a good battering tomorrow. As we lined up at the start, there was an opportunity for our Run Director to make us aware of some special milestones. Congratulations to Poppy Henson, one of our youngest parkrunners, who reached double figures. Well done on reaching 10 parkruns, and I’m sure it is just a matter of time before you reach 50! Speaking of 50, well done also to William WESTERMAN who was completing this milestone today, and lastly to Martin ODDY and Andrew KEELING who were each celebrating reaching a ton.

As we reflected on these achievements, our Run Director brought us all back down to earth with the news that regular Cross Flatts parkrunner and friend of many Kath CORAY very sadly passed away this week after a short battle with cancer. A former Run Leader with the South Leeds Lakers and an important figure in setting up Morley Running Club, Kath ran many parkruns at Cross Flatts with her partner Steve and will be deeply missed by all. It was a very moving moment as our Run Director reminded us that life is short and that we should make the most of each moment, and then initiated an impeccable minute-long round of applause for Kath. Our thoughts are with Steve, Kath’s sister Denise who was a spectator today, and their family and friends as they grieve for Kath. This report is in her honour today.

With the tribute completed, we were off and running down the superbly named Beeston Boulevard. Visiting from York as a tourist, I was intrigued to see how the course would unfold and in all honesty, a little unnerved that a hill on the course was spoken of in the same manner as the Travellator in the Gladiators TV show. Yet this could wait, as I concentrated on the first stretch – a gentleish uphill stretch to the top of the park and then back down again, done twice. After this was complete, I very much enjoyed hammering it down the downhill stretch, seeing the park open up in front of me and getting little glimpses of the Leeds skyline to my left. Before I knew it, I was approaching the dreaded Travellator! Having unknowingly gone up this stretch when walking to the start, it dawned on me only as I approached it for the second time and to be fair as I started to feel a bit leggy from the previous gradual incline. Hitting the Travellator with great gusto, I could fully see what it was mentioned in the First Timer Briefing! Somehow managing to drag myself up it and a further hill soon after (this was not mentioned!) I savoured the downhill stretch again. The second stint on the Travellator seemed even more epic the second time around, but after somehow dragging myself up it again, I got a boost of energy from somewhere and sprinted to the finish line. 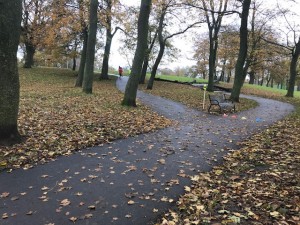 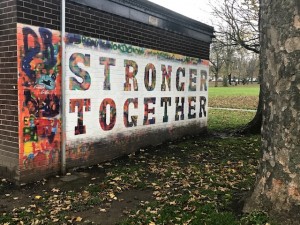 Living in Otley and working in Belle Isle I have given the South Leeds parkruns a wide berth - I don’t fancy doing my Monday-Friday drive on a Saturday morning however, for my 24th parkrun I decided to ‘brave’ the commute to Cross Flatts parkrun and I’m glad I did.

A beautiful Autumnal morning in a lovely little park in South Leeds - I didn’t even know it existed until I started parkrunning. I arrived with plenty of time before the start & parked on a side street opposite the park. The start is right near a small community cafe (which was open at 8:30) with toilets - perfect after a long drive and a great place to get a cuppa afterwards.

The RD gave the briefing & I was a bit confused when he mentioned ‘travelator’ the only travelator I knew of was in the 1990s Saturday night game show ‘Gladiators’...surely not? Ha! I knew exactly where it was when I stumbled (stopped!) upon it. More on that later.

The run consisted of small loops of the park followed by 2 full loops of the park. I was delighted to be cheered on by not only wonderful hi-viz heroes but also 2 children clapping and waving from their bedroom that overlooked the park. The park is also used by dog walkers who were also friendly when I said ‘Good morning’ as I passed by.

Now ‘The travelator’! It was a very steep (for me! I’m from Norfolk originally...) short incline. You feel like you’re running/walking up it but are you?

All in all a lovely run. 19 seconds off my PB around the flat sports fields in Wetherby. Maybe ‘The travelator’ wasn’t so bad after all.

Many thanks to our volunteers today, well done to all of our runners.

The run report is below.

This week there were 94 runners, of whom 10 were first timers and 20 recorded new Personal Bests. Representatives of 8 different athletics clubs took part.

Cross Flatts parkrun started on 30th March 2013, and since then 1,491 different runners, including participants from 114 athletics clubs, have completed 8,664 runs covering a total distance of 43,320 km, and there have been 1,906 new Personal Bests.

Today's full results and a complete event history can be found on the Cross Flatts parkrun Results Page.

Well done to all of our runners and thank you to our volunteers.

Your run report is below.

This week there were 124 runners, of whom 16 were first timers and 25 recorded new Personal Bests. Representatives of 11 different athletics clubs took part.

Cross Flatts parkrun started on 30th March 2013, and since then 1,481 different runners, including participants from 114 athletics clubs, have completed 8,570 runs covering a total distance of 42,850 km, and there have been 1,886 new Personal Bests.

Today's full results and a complete event history can be found on the Cross Flatts parkrun Results Page.