Being relatively new to parkrun, one question I had before I started, was how seriously those involved took parkrun.

I read in awe during the week that the World record for a woman’s parkrun was broken by – Charlotte Arter in Cardiff at 15 mins 49 secs, now that was serious run! But she is an Olympic athlete, so what about everyone else?

Serious enough to run 100 parkruns? Well Drumpellier’s own Dougie Holmes and Dave Slater chalked that off last weekend, and I was proud to be part of the run that day. But there was coffee, cake and chat afterwards and it seems parkrunners are as serious about their cake as they are running. 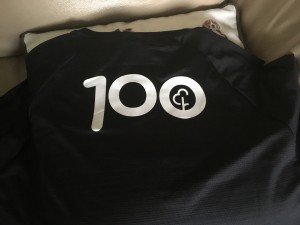 Serious enough to avoid a beer on a Friday night ? – well for some maybe, but I am glad that when I was out with my son last Friday night, (who I would call a serious runner) and fellow parkrunner – he had a beer, meant that I felt like I could too!

This week though, I decided not to run but to volunteer. I am not fast enough to do both for many volunteer positions and so I thought I would do my bit and skip the run this week in favour of barcode scanning. What an experience, I seriously didn't think I would find it as satisfying as I did (you see what I did there?) Once I downloaded the app and had a few practice sessions I was ready to go and duly turned up at 9am for the volunteer briefings.

This event was made possible by 16 other volunteers:

I had been watching the weather forecast earlier in the week with threats of serious weather in Storm Ciara on the horizon, and concerns for parkrun cancellations. However, as it happened on the day it was calmer than expected, the wind died down a bit and was only a challenge to the participants on the open stretches around the Loch.

It was around 7 degrees (without the wind-chill factor) and this rare winter Scottish phenomenon appeared in the sky, just before everyone set off. I think they call it Sunshine! Dave Slater was RD for the day and after briefing the 39 newbies (9 brand new to parkrun and 30 other first time visitors to Drumpellier), he went off to brief a field of 244 participants and welcomed 31 different clubs to the event. The biggest visiting club were the Kirkintilloch Olympians with 24 members taking part. There was a big shout out for Amanda Brown as it was her 50th event. 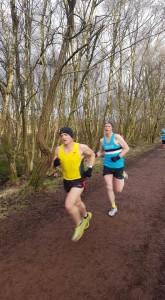 This week I got a completely different perspective on the run, for the first time I could witness the start line and with a little jostling going on, I knew this was going to be an exciting event with the Olympians keen to be in the pole positions. These guys were certainly taking it seriously. Then 3, 2, 1 and they were off.

Now when I run the event it feels like it takes forever – well about 34 minutes but that feels like a lifetime, but watching it and being part of the scanning team it just flew by. Ken was on the stopwatch and we saw the front-runners come round the bend of the first lap at about 8 minutes, neck and neck with each other, in no time at all they were heading our way and it was time to take up our positions.

There was a real sprint for the finish with Phillip McCaig 17:19, taking first place from Andrew Kirk, Robert Gilroy and Graham McCabe, all coming in within 5 seconds of each other. The guys put their all into the last 100m and by the time they came to scan in they were punch drunk throwing barcodes in any order at us. I thought that’s exactly how I feel when I get to a scanner and can never get it in the right order, because your brain isn’t responding to anything apart from getting over the line.

Sara Nunney 20.13 was first lady across and then there were a number of dog handlers and people were coming in thick and fast and the pressure was on for all the volunteers to manage the funnel, timing and scanning. The lovely thing was though that most runners thanked us for volunteering, made it all worthwhile. 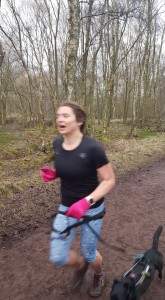 I have a couple of special shout-outs as well as those above, there were two young boys, running with their parents, and I was amazed to see them cross the finish line of a 5k event – they must have been less than 8 years old and one had fallen but he’d picked himself up and kept going to the end.

But my inspiration of the day was absolutely Lorraine McInnes, whose family were at the finish line cheering her on and as they shouted “come on you are 90 seconds ahead of your PB” – she corrected them in no uncertain terms with a huge smile, after checking her watch, “I’m 2 minutes ahead!”

There were another 72 participants who achieved a personal best as well as Lorraine, including Craig Fleming who ran his 200th parkrun with us.

So what is my conclusion, do parkrunners take parkrun seriously? Yes they do, whether they are volunteering, walking, running, jogging, trying to beat their PB, pushing a pram or talking the dog around, they all take it seriously but with the amount of laughter and fun observed, I know that no-one takes themselves too seriously!

PS. A quick reminder that Maria, one of the core team, and a volunteer yesterday is running her 250th parkrun on the 29th February and your support on the day would “seriously” be appreciated.