With Cheltenham ending yesterday and the vast majority of sporting events around the UK being cancelled or on hold due to the Covid19 pandemic, the eyes of the sporting world turned to Coatbridge and the 33rd edition of the Drumpellier Country Parkrun. One hundred and eighty five (185) took part in very good conditions for this time of year – dry under foot and overcast overhead - under the guidance of run director Cara Sullivan and her band of excellent volunteers. Remarkably, there were 45 personal bests amongst the runners and walkers this time round. 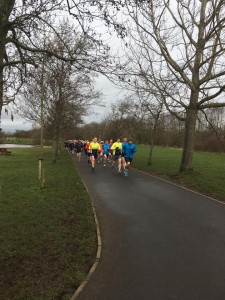 This morning saw a number of Parkrun tourists from Linwood, Edinburgh and London, to name a few. Matt Garner from North London completed his 205th Parkrun and has chalked up more than a hundred different venues throughout the UK. Amongst the first timers were Ethan Kidd (aged 7) and his dad, Scott. Ethan also gets involved in junior Parkrun and was delighted to have ran todays course in less than 30 minutes. He was on his way for a well-deserved Empire biscuit treat! Other notable runs were had by Elaine Kennedy, Gordon Christie and Richard Baird – who all managed to smash their previous best runs. 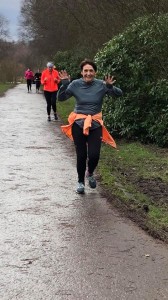 Johanna MacIver had a good run round the park with her well behaved and playful beagle, Lucy. Alistair Macintosh was happy with his time and plans to challenge himself with another shot at Plean Parkrun in the near future ……..good luck with that one Alistair! Locals and siblings, Berny and Frank, had very strong finishes on the last long sweeping corner. No idea where their final shot of energy came from, perhaps the marshals encouragement on the last corner helped. Frank, in particular, is really feeling the benefit of starting to run again in his local park. 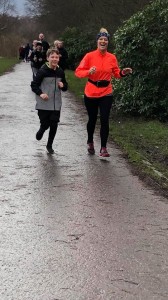 Very impressive runs were had by husband and wife, Lewis and Morag Miller. Lewis was first male finisher with a PB of 17.33 and Morag was first female finisher in a time of 19.32. Exciting times ahead for Morag and Lewis as they are expecting their first child in May. Wishing them lots of luck on their parenting journey - you never know, they may have a future Olympian on their hands! Another family out running this morning was Stephen, Jennifer and Malin. Stephen was glad to not be pushing the buggy around the hills of Tollcross this morning and is rapidly bearing down on his black t-shirt.
A massive well done to the organisers, volunteers and participants from today. Another successful morning with everyone benefitting physically and psychologically from todays event. We look forward to seeing you all again soon - keep your fingers crossed (and washed) for next week.