Saturday morning (aka parkrun day) dawned cloudy, but mild and dry.  Which was a welcome change after the recent weather and perfect for International Women’s Day parkrun.

By the time I joined the many runners making their way over to Eastville Park from Tesco the sun was struggling valiantly to break through the cloud and it was looking to be another busy run at Eastville parkrun.

I signed up to parkrun in 2008.  For a variety of reasons and non reasons I didn’t end up doing my first run until 10 years later in August 2018.  I was immediately hooked by the friendly and welcoming atmosphere and today marks my 50th run.  And what better way to celebrate than by writing a run report (although some might say that I could have brought cake….)  Over the past 17 months I have run at varying speeds, jogged with my daughter and (tail)walked.

So, back to today’s run, event #116.  After the first timers’ briefing run director Becky did the introduction and we had a photo to mark International Women’s Day with plenty of purple on show.  I don’t know if there were more women than usual today but there were 643 people enjoying the excellent running conditions, 247 of whom were female. 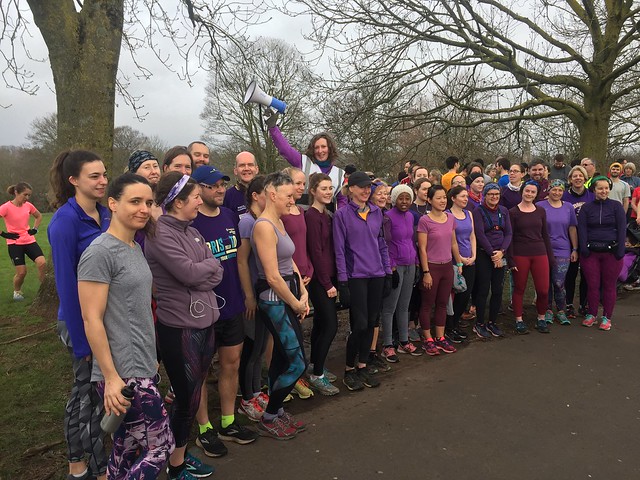 There were rather fewer milestones this week than usual, with only LEO SEYMOUR running his 50th as well and getting an excellent personal best of 18.30.  Which is a shame as milestones this week were being marked by #thisgirlcan t-shirts being handed out.  Thanks parkrun!

A quick shout out to tourists followed, but unfortunately with all the hubbub at the start I didn’t catch where anyone was from, and then we were off!

Now, Eastville is far from the flattest parkrun.  This is perhaps unsurprising given that we are in Bristol!  According to jegmar.com, which helpfully gives elevation rankings for parkruns, neighbours Pomphrey Hill and Ashton Court are hillier though.  We start off with a small lap, followed by a longer lap which includes a run around the beautiful lake, and finishing off with a final lap taking in  long inclines and the top of the park. What goes up must come down however, so we get a nice downhill stretch once you have rounded the top of the park.  Over recent weeks the finish funnel has been extended somewhat to account for the many runners heading to the park each weekend but there were several barcode scanners on hand to scan our barcodes.  #dfyb people, as no barcode means no time!

Today’s first female finisher was Kate Howard getting a new PB of 19.09.  Well done Kate! The first male finisher was sadly without a barcode, but hot on his heels was Philip Parry in 17.41.  Philip was also this week’s highest age grade, with a fantastic 88.41%.

If you are reading this trying to muster up the courage to try parkrun, come along next week.  You won’t regret it.  It doesn’t matter how fast you are, or what you wear, everyone is welcome.  And at Eastville there are always plenty of cute dogs joining in the fun too!

Many thanks to Jo Morris for writing this week's run report. Congratulations on also completing your 50th parkrun!
See you all in the park again soon.
Becky & Adrian, RDs for Event #116 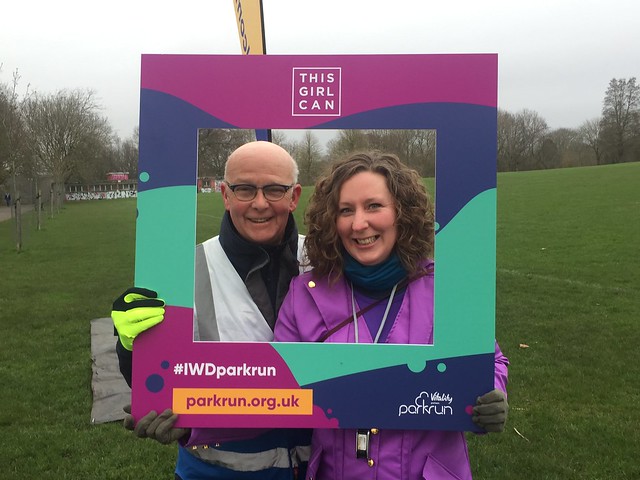 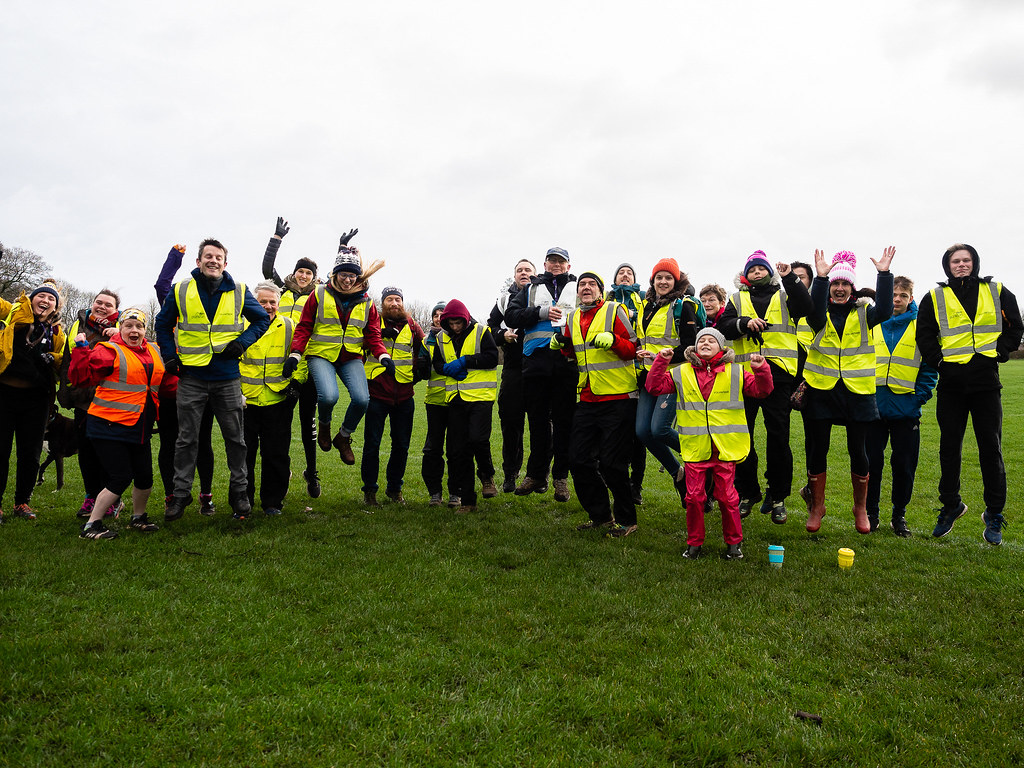 An impressive 557 runners turned out for the eagerly anticipated 29/02 parkrun,  with many eager to avoid waiting 28 years for the next opportunity to do so. I wonder if any of the 24 first time parkrunners also had this in mind?

I live in Sheffield but embrace every chance to visit local parkruns when away from home.  Despite finding myself in Bristol for a stag weekend, I wasn’t going to let the previous evening’s merriment deter me from Eastville parkrun. I was, however, unable to convince my companions to join me.

Having arrived at Eastville park in good time, I was able to drag myself from the warmth and comfort of my car in time to catch the all important first timer’s briefing.  Things were looking good.

Then came the race briefing from the fantastic Race Director, who somehow managed to bellow through the baltic, horizontal gale and drizzle that was nowhere to be seen just 2 minutes prior. He remain unperturbed and focused but I was starting to feel the familiar twinge of doubt in my decision to choose parkrun over a lie-in.  The enthusiasm of the man who shouted ’50!’ to declare his milestone run, was enough to make anyone forget about the cold. 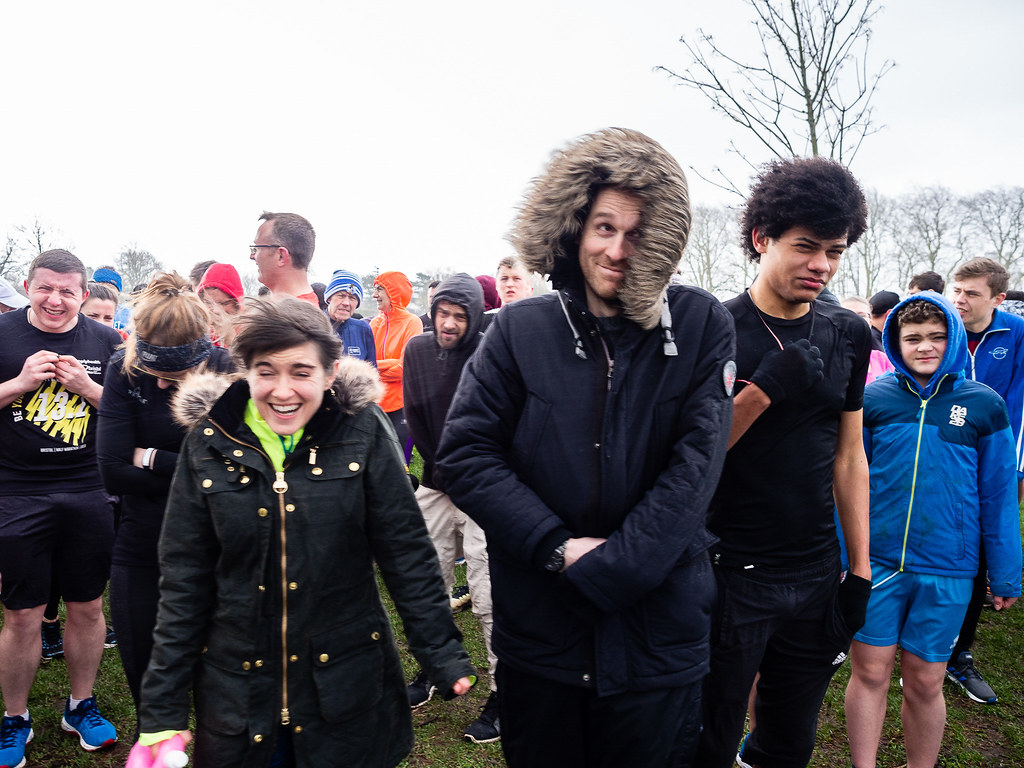 Any doubt I had vanished as soon as the roar of ‘go’ reverberated among the 500+ chilly runners/walkers, particularly as the rain and wind immediately ceased.

This made for a fabulous run, particularly around the lake on the second lap. There was a buzz about the atmosphere which made the event welcoming. People were being encouraged to leap for the camera, the volunteers were incredibly enthusiastic,  and I am pretty sure I saw a runner pushing a twin stroller up the hill!

The moment that made it for me was, with the finish line no more than 800m away, one of the tailwalkers produced a Freddo chocolate bar.  As I approached she asked if I wanted one. Of course I did! One can only assume that this was in linked to Freddo being a frog. Frogs leap. It was the leap day.  The link was seamless. 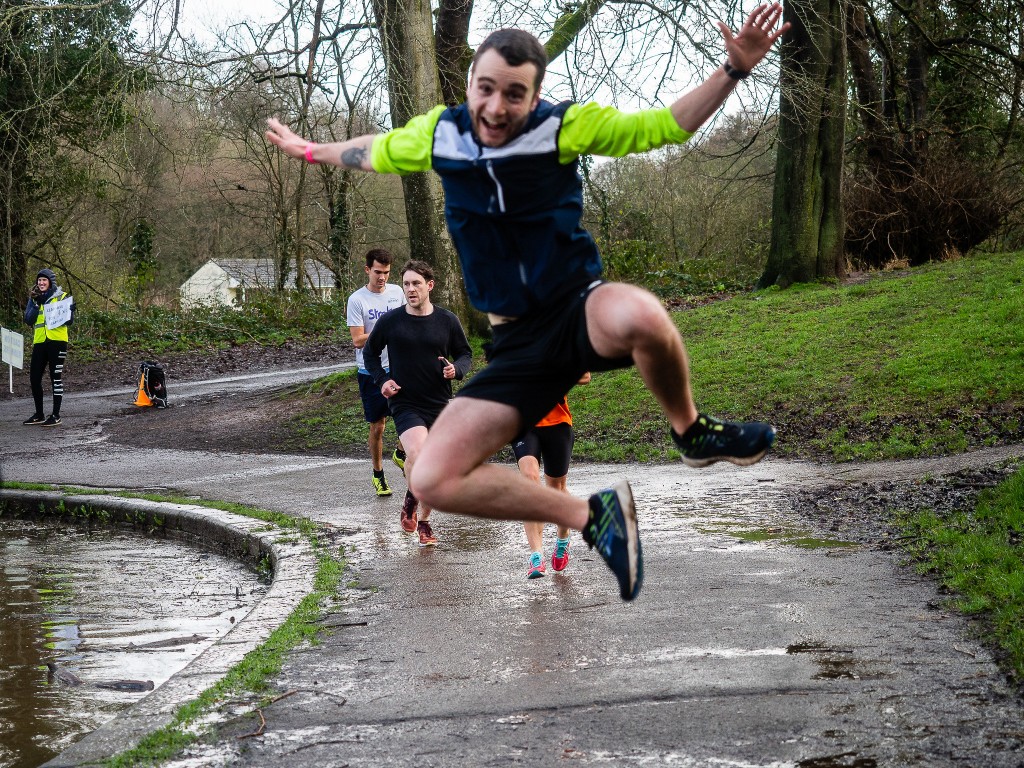 A couple of minutes later I crossed the finish line, Freddo in hand, smile on face.

A massive thank you to all the volunteers and well done to everyone who completed this weekend’s Eastville parkrun. A special congratulations to the 6 people (Alan Cavill, Nicolette Penney, Stan Patrzalek, William Baker, Ismail Rashid (PB) and Samuel Kirwan) who achieved their 50th , and to Tony Myers for completing his 100th!

This week 557 people ran, jogged and walked the course, of whom 70 were first timers and 82 recorded new Personal Bests. Representatives of 49 different clubs took part.

Today's full results and a complete event history can be found on the Eastville parkrun Results Page.

But the wind seemed far stronger than the previous weekend but with no name allocated it seemed Storm Eastville would be appropriate ! At least the river level had dropped and it was dry

Our most prolific parkrunners today were Karen and Gerard Watson with 338 and 334 parkruns respectively . Gerard you have some catching up to do !! 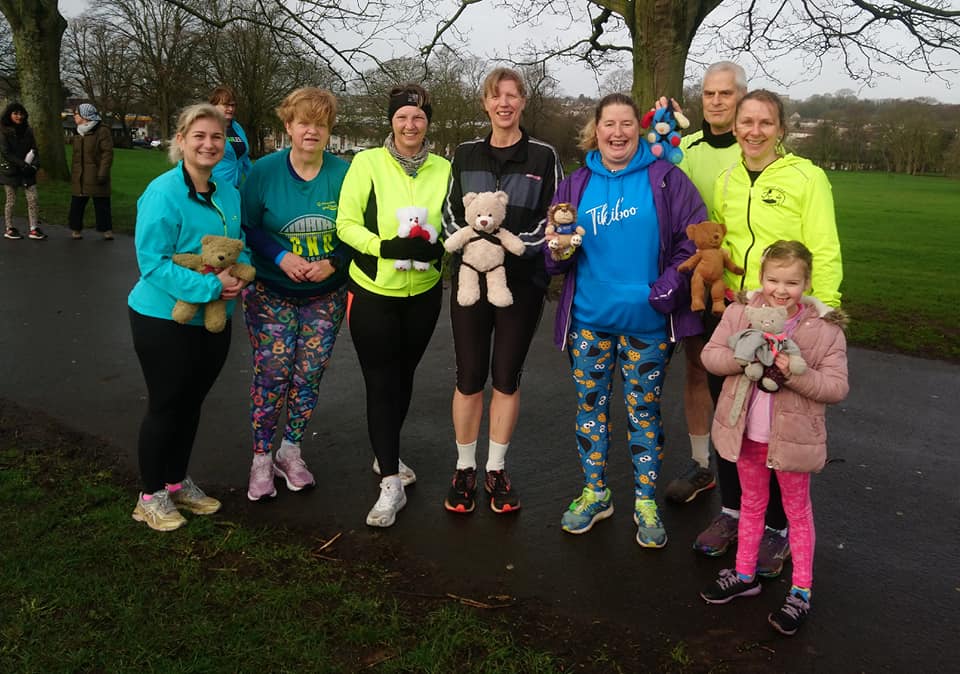 The pop up cafe will be open

This week 573 people ran, jogged and walked the course, of whom 110 were first timers and 89 recorded new Personal Bests. Representatives of 51 different clubs took part.

Today's full results and a complete event history can be found on the Eastville parkrun Results Page.

Storm Dennis was expected at Eastville as this weekend. The team deliberated, discussed, issued warnings, inspected the course multiple times, advised on warm attire, and at 7.30am confirmed we were going ahead. Many of our neighbours were anticipating Dennis to be a bit more of a troublesome guest and cancelled, so many of our local friends joined us this week. As it turned out, it was a little bit windy, the rain stayed off until the end and all runners returned safely. 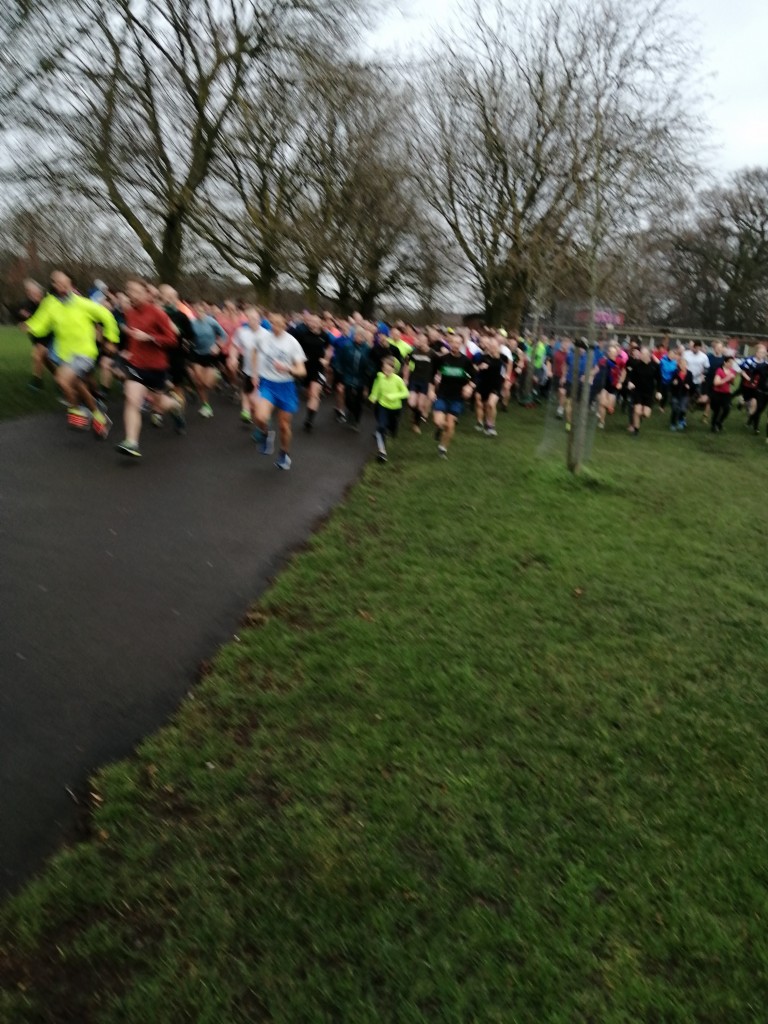 This week 639 people ran, jogged and walked the course, of whom 104 were first timers and 79 recorded new Personal Bests. Representatives of 57 different clubs took part.

We were the 8th best attended Parkrun in the UK. Thank you to all who braved the storm to take part.

We had a couple of milestones this week. Katie Gadd reached her 50th and Howard Jameson reached 250. Howard battled the elements to bring a large Milestone celebration cake, which was much appreciated by the volunteers and runners. 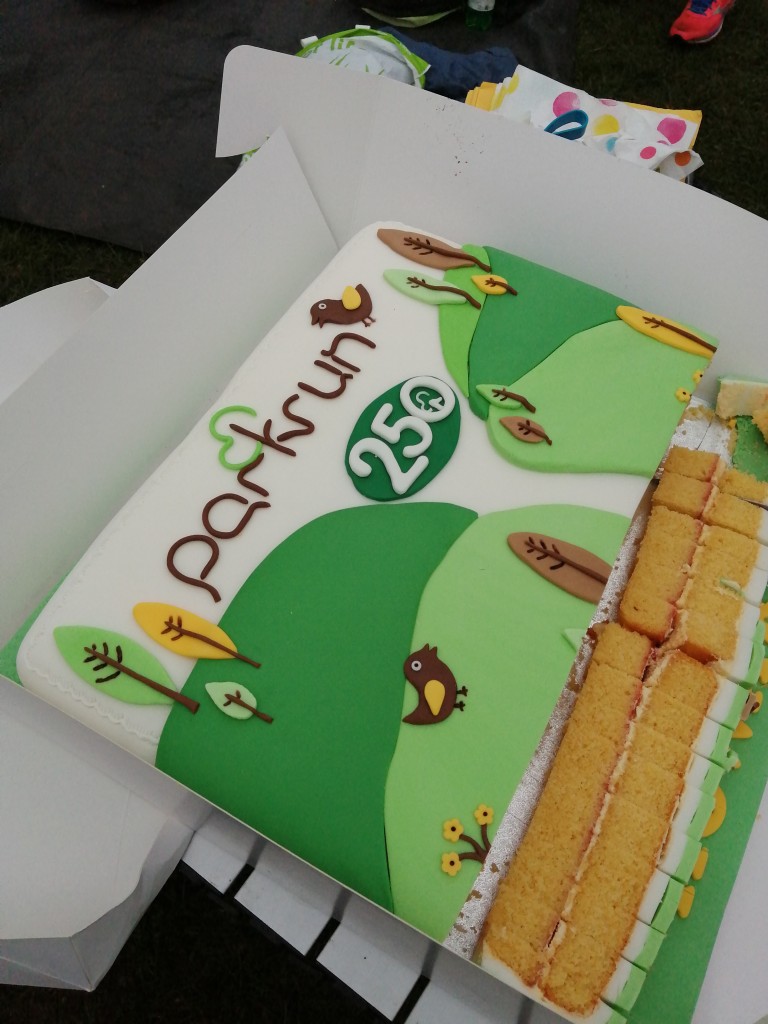 A big thank you to all the volunteers who helped make this event was made possible, especially in less than ideal conditions.

We look forward to seeing you next week, when hopefully Dennis is a distant memory.