A sunny morning and a table laden with cakes greeted the 201 runners and 22 volunteers at Ellenbrook Fields on Saturday. The reason for all the cakes (and why Carrie couldn’t get to the megaphone... sorry about that!)?  Rob Blythe (my dad) was celebrating his 100th parkrun, so had brought along cakes made by me and my mum, and a few boxes of sliced watermelon.

Another milestone was being celebrated as Richard Stratton was celebrating his 25th time of volunteering. As parkrun is run by volunteers it is always fantastic to celebrate the people who regularly spent their time in this way.

To make them stand out, they were both given crowns to wear - as we ran past one group of marshals one of the children called out “There’s the king!”. So, if you want to be a parkrun king or queen for the day, keep on running or volunteering. 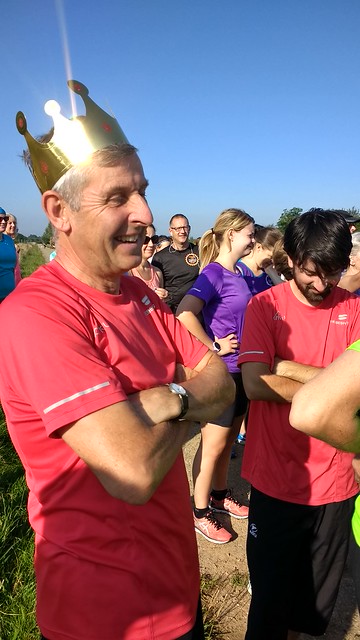 The crown of glory glinting in the sunlight

We welcomed 13 first timer parkrunners, and at the other end of the field we had 14 members of the 100 club including tourist Dean Allaway running his 214th run. A whopping 52 runners earned PB’s (excellent work!) it must be the thought of cake at the finish that helped to spur them on!

The runners of the Blythe family decided to run together, and we finished in positions 105, 106 and 107, with the crown still on Dad’s head. The cakes were going well, but the watermelon seemed to be the biggest hit- we can’t claim credit for this as we had previously visited South Oxhey parkrun when a runner was celebrating her 50th run, and had brought along watermelon slices to celebrate. 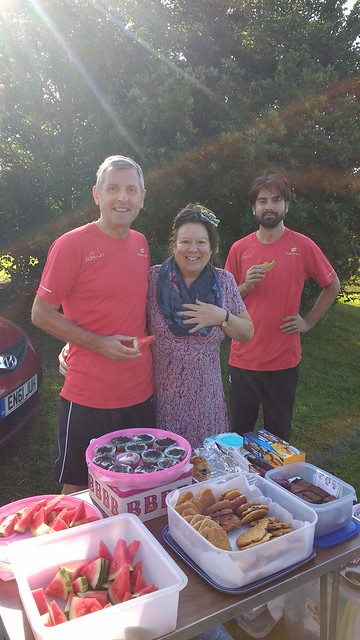 Enjoying a slice of watermelon after the run 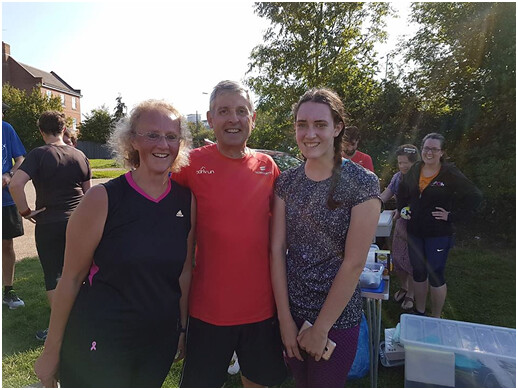 We hope you’ll be back, and although we don’t have cake every week we do have a coffee van and lots of friendly faces.

Today's full results can be found on the Ellenbrook Fields parkrun Results Page, together with a complete event history.