“All parkrun events in the United Kingdom have been suspended with immediate effect due to the ongoing COVID-19 (Coronavirus) situation. At this stage we have cancelled events up to the end of March. Please follow our communications channels for ongoing updates. parkrun’s global position is published and will be updated here.”

We'd also like to respectfully request that parkrunners do not organise unofficial group runs starting and finishing at the Ellon start area at 0930h on Saturdays. This would go against the government recommendations for social distancing, have the potential to create confusion, and potentially damage the reputation of parkrun.

Thanks for your understanding. Stay well and look forward to seeing you again after the suspension.

This week 106 people ran, jogged and walked the course, of whom 7 were first timers and 15 recorded new Personal Bests. Representatives of 11 different clubs took part.

It was a chilly day with a strong wind.  The runners had shelter for most of the way round but the finish was very tough with a constant headwind up the hill to the finish.

We also wished good luck to all those taking part in the Newburgh Beach Bash, and well wishes to the many Ellon parkrunners who would have been marshalling/volunteering there today.

parkrun in the UK and Coronavirus

As you can see from this map, the UK was the only country in Europe to hold parkruns today.  All other countries had to cancel due to government restrictions.  This is a constantly evolving situation and at any time it may be the case the UK government imposes similar restrictions.  Keep an eye out for news. 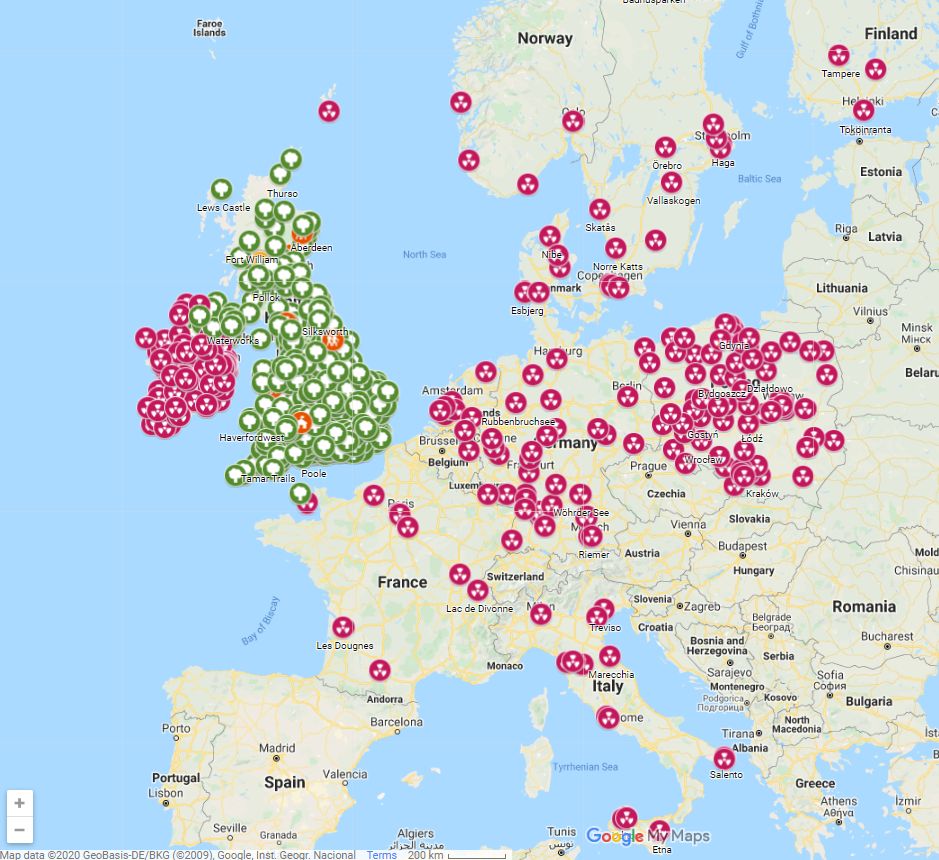 A dedicated Coronavirus newspage link can be found on the homepage of every parkrun venue website.  It can also be found below.

Anyone currently on the volunteer roster who would prefer to stand down for the time being should please just get in touch.  You will be 100% supported in your decision.

Probably worth waiting until at least Monday however to see what further announcements are made.

All the best, stay well and hope to see you soon.

Despite the sun getting scared and staying away, this week 183 people ran, jogged and walked the course, of whom 13 were first timers.  Having the pacers must have helped as 41 people recorded new Personal Bests.

Our first male finisher was Ryan McRae in 18:42 and our first female finisher was Hannah Taylor in 20:15.  Some spot prizes were donated by Sandra Kelman, doing her 50th parkrun and Andy Fraser, doing his 100th Ellon parkrun, so congratulations to the lucky winners in spots 79, 96 and 100.

The forecast rain held off, so nobody got too wet, but it was a bit chilly for the volunteers' fingers, so thanks to them for making the event happen.  They were:

Thanks to everyone who took part and see you next week, happy running, Tamsin (this week's run director)

No parkrun has ever been held on Saturday 29th February. The last time the 29th February was a Saturday was 1992 and it won't happen again until 2048. So today was special if you like those quirky kind of facts!

Hugely better weather than we had all anticipated so runners and volunteers alike were all duly grateful.

Milestones today were Aidan Robertson who completed his 10th parkrun and Dave Coull who celebrated his 100th parkrun. Dave kindly donated a box of chocolates for position number 95 which was his position at his first ever parkrun.

It's International Women's Day parkrun next week so 'purple' is the colour to wear and bring along that 'female' friend who has printed out a barcode but never run.

It is also pacer week as well, odd numbers from 21 to 39 minutes. If anyone fancies trying this then let us know. We are also short of volunteers for the next month so have a look at our future roster and see if any role takes your fancy. Full training given on the morning of the run and all roles are fairly straight forward. Please email ellon@parkrun.com including your barcode number if you would like to volunteer.

Thanks to all the volunteers today

This week 213 people ran, jogged and walked the course, of whom 22 were first timers and 42 recorded new Personal Bests. Representatives of 17 different clubs took part.

Today the weather started off good but then the snow started, well done everyone for running/walking/jogging to complete the course.

This week 184 people ran, jogged and walked the course, of whom 13 were first timers and 35 recorded new Personal Bests. Representatives of 16 different clubs took part.

Today saw a very blustery and windy day, although thankfully the rain and storm Dennis didn't make an appearance.

This week 166 people ran, jogged and walked the course, of whom 23 were first timers and 25 recorded new Personal Bests. Representatives of 13 different clubs took part.

The event was made possible by volunteers from our local Ellon jogscotland Graduates running group, and did a grand job in less than favourable weather conditions. Thank you everyone!

We're aware that a few results towards the end may be incorrect - sorry!  If yours doesn't seem right, please email us with your time and position number and we'll look to have this corrected for you.  Please email ellon@parkrun.com.

It was the calm before the storm at Ellon parkrun this morning as conditions were almost perfect and there was no sign of the ice of recent weeks.

Today we had 187 runners,joggers & walkers of whom 12 were first timers,44 recorded new PB's and 14 clubs were represented.Huge congratulations to Max Abernethy on setting a new course record of 15.57 improving his own previous record and recording the first sub 16 time at Ellon.

Wendy Beattie & Glynis Buchan both completed their 50th runs, thanks for the sweets and spot prizes provided.

Well done to all the parkrunners who braved the chilly wind today-at least it wasn't icy!
This week 201 people ran, jogged and walked the course, of whom 18 were first timers and 31 recorded new Personal Bests. Representatives of 13 different clubs took part. We welcomed visitors from Aberdeen and Omagh, Northern Ireland.
We also had our very own run director, Andy Fraser celebrating his 150th parkrun and 50th stint at volunteering-very well done Andy!
The pacers proved popular again today with a healthy number of runners turning out-the new year resolutions appears to be holding up well!
Thank you again to all the volunteers and pacers today. We are short of volunteers over the next few weeks, if you would like to volunteer simply email ellon@parkrun.com with you barcode number and we can get that set up for you. All tasks are straight forward and the help is very much appreciated!

Another fantastic turnout this week with 237 runners, joggers and walkers, plus a few dogs!  Those New Year's Resolutions are holding up well, keep it going!

Of those 237, we had 22 first timers coming along and despite the slightly slippery conditions, 45 new PBs (almost 20% of the turnout).

Meanwhile at the front of the pack, Max Abernethy finished in 16:07, just a few seconds off his and our course PB.  Given the conditions today, a sub-16 minute looks imminent. No pressure Max!

And just a word about today's path conditions given we've had an increase in numbers recently and many are taking part in their first parkrun winter season.  As you noticed and a few people commented, it was a bit slippy in places.  However, as we do every week, a route recce was carried out immediately before the run and the run director makes the call on whether they deem the course safe to run.  So even though there were a few slippery or icy places, as long as everyone takes care and any possible issues are highlighted during the run safety briefing, the route is always considered safe to run with due caution.  The path is wide with grass verges along most sections, allowing space for passing any such areas safely.  But ultimately it's your decision and if you feel it is unsafe for you personally, it's perfectly acceptable to walk sections or even abandon your run altogether.

Next week, as it's the first parkrun of the month, we will have pacers from 20' to 40', providing the conditions are considered safe to do so.

Thanks as ever to our volunteers without whom today's, and every Saturday's, parkrun would not go ahead.

See you all next Saturday, happy running this week!

This week 201 people ran, jogged and walked the course, of whom 28 were first timers and 26 recorded new Personal Bests. Representatives of 14 different clubs took part.

Chilly conditions this morning and runners had to contend with some frost on the ground and a few bits of ice to avoid.  The run was deemed safe enough to go ahead although of course we always advise people of conditions so that they can choose not to take part on the day if they have concerns.

We congratulated Andrew Rennie for reaching the 100 club milestone.  He donated a few spot prizes to some lucky runners.  We also heard that we had some visitors from Inverness, Edinburgh and Belfast.

Regulars will have noticed that Ellon now uses the "parkrun Virtual Volunteer" smartphone app for timekeeping and scanning.  Scanning can be a little slower due to the time it takes for the camera to focus, but the good news is that they are good at reading even very scruffy barcodes, which saves the volunteer team writing down unscannable numbers and manually entering them during processing.

I'd like to say a general thank you to Ellon parkrunners for giving their full attention to the pre-run briefing, especially on a day like today when someone forgot to charge the PA system (oops!) and so had to attempt to talk loudly enough to be heard by 201 people.

See you next time.
Steven G

parkrun tries to have as few rules as possible.  Here is a reminder of the important ones.