The Mop Fair is back in Evesham this weekend (2nd October), which won't affect parkrun itself but if you're driving there are some road closures.

From north Evesham, the High Street will be closed, but you can follow diversions down to Waterside and then get to us from Abbey Road, turning left shortly after the leisure centre onto and up Abbey Lane rather than continuing up to Merstow Green roundabout which will also be closed.

Alternatively there are pay and display car parks at the leisure centre or next to the bridge, then walk along the riverside path to the start line.

See the map for full details, and if you're not sure about anything just email evesham@parkrun.com 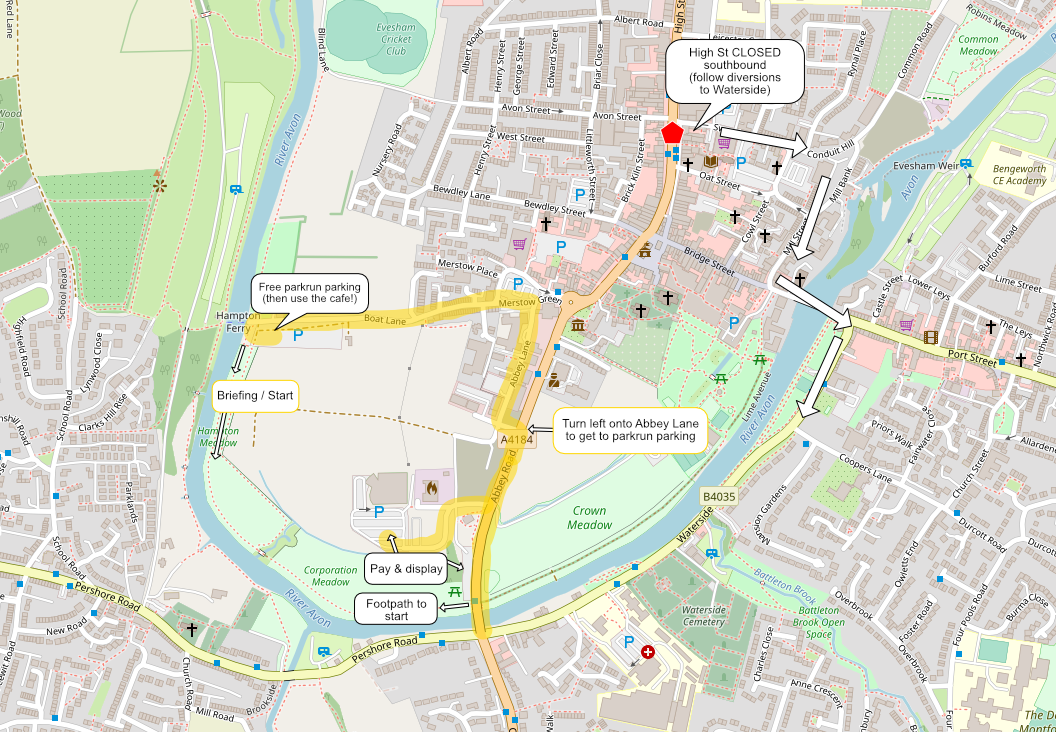 My parkrun tourism from Banbury brought me to this lovely flat riverside course in Evesham.
The foggy weather as we left home soon abated and gave way to a
bright autumnal morning .
After just a short walk from the free parking near the cafe, the 167 strong field of parkrun enthusiasts joined with the volunteers beside the River Avon in the picturesque Evesham meadow.
After a description of the 2 lap course by Ian, RD Niki gave a brief safety reminder and a presentation to long standing volunteer and former ED Eleanor and we were off!
The start was a short sprint up the field to a turn around point then the first half of the lap followed the river on the tarmac path. After a while there was another turnaround point and we all headed back along the grass ultimately back to the start/ finish line. Then ! One more lap! Same again, half a lap of hard standing and half a lap of grass and home! finished ! Ready for that cuppa now !
Many thanks to the cheery marshals, great organisation and a lovely run which is definitely one to return to !
As a point of interest Evesham is the perfect place to get that elusive “E” to your parkrun alphabeteer challenge ! Only 11 “E”s in England, I challenge you to find a more attractive location !! My wife walked along the riverside and left this beautiful painted stone to be found!
Colin Taylor

Editors Note: Area checked on 19 Sep and stone has already been taken.

(This week's run report has been written by Jason Cannadine)

What a privilege it was to run my 250th parkrun today at Evesham after starting the parkrun journey back in October 2013. With a major interruption due to COVID lockdown I had my achieved my next milestone at last!

The weather was bright and sunny ( as usual at Evesham by the riverside). A healthy number of runners (157) and volunteers plus a sprinkling of supporters attended and listened to the pre-race briefing by the run director. I felt honoured to have a special mention recognising my 250th parkrun plus more importantly to me was acknowledging my late wife Angela who also enjoyed parkrun. She had been taken by breast cancer one year ago this weekend and she will always be in my heart. 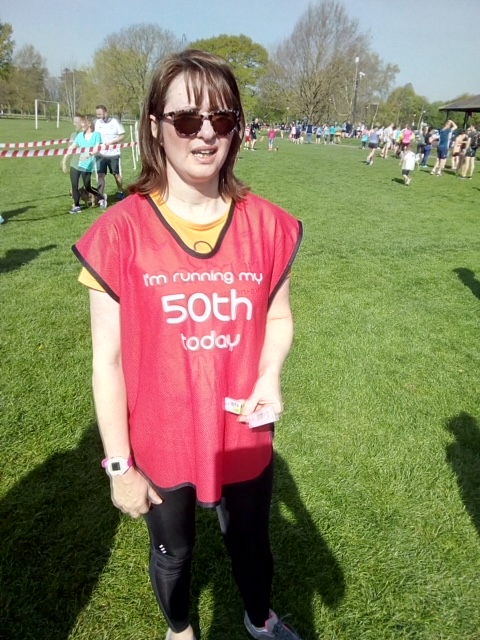 Our special parkrun friends ( brewbear parkrun club) had supported my wife through her diagnosis and treatment plus early lockdown until her sad parting. To honour her they ran wearing one of her parkrun orange tops which was a nice touch ( Lisa and Angelika).

The countdown to the start began and the newly adopted phased start allowed the field to begin. It was an enjoyable run with lots of support and encouragement from runners and spectators. A large contingent from pershore plodders running club brought some colour to the event ( purple shirts) and all participants achieved their goal of completing another 5km. 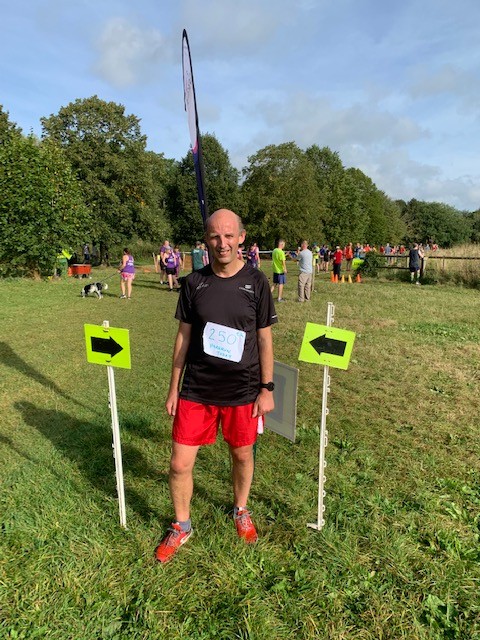 Once I had completed the course and the volunteers had scanned my barcode it was then time to see who would win the chocolate bonus prize. It was awarded to whoever came 69th place as that was how many parkruns my late wife will forever be stuck on. The recipient was Stephen Derbyshire, despite being overtaken in the last 20m, this actually worked in his favour for an edible reward to share with his family.

As usual I need to say another massive thank-you to all the volunteers for their time in allowing us all to take part. Getting my 25 volunteering badge is my next goal for parkrun. On a running note I am running the VLM on October 3rd and if you can read about my late wife here. 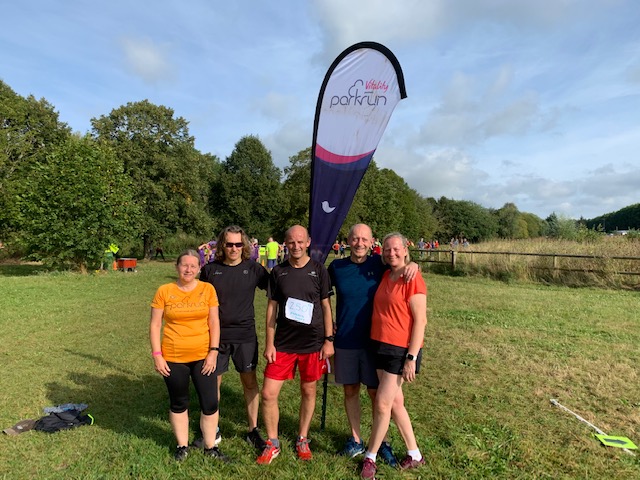 It was my first visit to Evesham parkrun, I had decided to timekeep so I could meet some of the volunteer core team. I have been the Event Ambassador for this event for about 18 months, but with the big pause, this was my first opportunity to tour here. 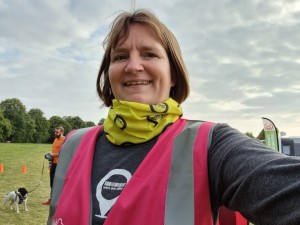 I arrived early and put my pink high viz on which goes perfectly with my ‘with me now’ merch. If you have not heard of it before, ‘with me now’ is an unofficial parkrun podcast presented by Danny Norman and Nicola Forward who between them have done over 1200 parkruns. Each week they profile the events they have been to, as well as sharing all sorts of parkrun news and chat – well worth a listen https://withmenow.libsyn.com/

In the field by the start, there were a number of campers in their caravans and motorhomes who had been there since the fishing contest a week ago – the team had agreed that the course could safely go down the path between the 2 rows of caravans – by the time it was 9am, several campers were sitting outside and cheering the runners through, it made for a great atmosphere. 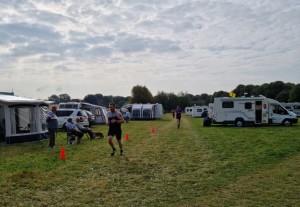 The run briefing was listened to by all in complete silence, very impressive, I think it was a combination of the Run Directors lovely loud and clear voice, plus a couple of people in the group holding up ‘Quiet Please’ signs. 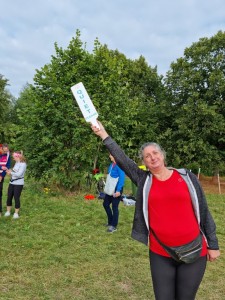 Evesham parkrun is a 2 lap course, partly on grass and partly on hard packed paths – the laps obviously mean that parkrunners get to run past the volunteer team at the end of their first lap and be cheered on – although this was at the end of the path between the campers – so many runners commented that one of the caravans were cooking their breakfast and the smell of bacon was teasing them to stop and ask for a bacon sandwich.

There were several parkrunners with ‘race’ bibs on today – this was to be part of the World Record Attempt for the most people to run a remote 5km in 24 hours – the record currently stands at 6,000 and 10,000 had so far signed up for the challenge. They were to do their run, upload evidence from Strava etc and hopefully get a photo of themselves running it too. 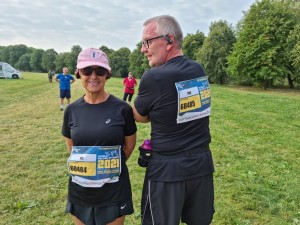 First male finisher today was Tom Bristowe in a time of 17:32 and first female finisher was Ami Rutter in 20:09 which was also a new PB for her too. A total of 13 parkrunners achieved a PB today – well done to you all. 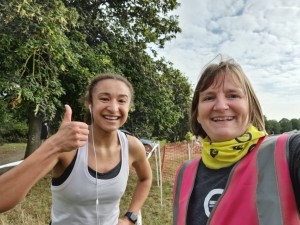 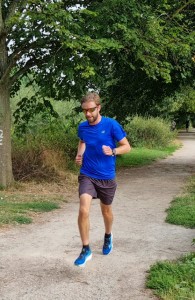 The post parkrun café, Raphael’s is only a 2 minute walk from the finish line. With lots of seating outside it made for the perfect morning – sitting outside with blue sky and warn sunshine watching the boats go past on the river. 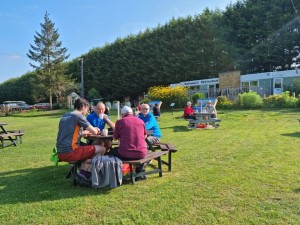 Such a lovely morning – I hope to return before the end of the year to run it, although I am told that the fields can get rather muddy making it a whole different challenge, but I think that just adds to the fun!

This week 125 people ran, jogged and walked the course, of whom 29 were first timers and 13 recorded new Personal Bests. Representatives of 13 different clubs took part.

Welcome to everyone on Saturday March 7th to encourage more women and girls to participate in sport and getting active - we truly welcome walkers, talkers and runners, wheelers, signers, Visually Impaired and EVERYONE to our parkrun at Evesham. Please do encourage any female relatives and friends to come along and take part, volunteering or walking/running or spectating and cheering everyone along on Saturday March 7th - be there from 8.30 onwards and join us for coffee, tea, legendary bread pudding and breakfast at Raphaels restaurant afterwards.