In a complete change from last week, we gathered for the start of this week's run in warm, dry weather with only a very light breeze from the south east (headwind outbound). A very large number of seagulls had gathered offshore near the start, to watch us run (or maybe the tide was right for a bit of fishing). Darren (Daz), the Run Director, got the run off to a prompt start after a short briefing, the Covid framework still not permitting milestones, visitors and other events to be highlighted. 360 runners, joggers and walkers (not to mention a few dogs and buggies) completed the course in what was almost ideal weather, the only problem being the low autumn sun which can make it difficult to see what's ahead on the outbound stretch. However, there were no loud clangs as we passed the parking ticket machines, suggesting most runners had at least spotted these obstacles, cunningly painted in low-vis black.

A lone piper was playing, not at the gates of dawn* but at the gates of the lifeboat station, much appreciated at least by myself, having lived in Scotland for many years. He has become a bit of a regular feature recently. Potential there for a bit of charity fundraising, completing a parkrun while playing the bagpipes (don't mention kilts).

Turning at the flagpoles, the headwind became a very light tail wind, not really enough to make any difference. Few pedestrians or cyclists about this morning, and with the sun now behind us, we could see any that were in plenty of time to avoid them. The barkrunner in front of me provided a pacemaker for the rest of the run, the dog clearly happy to be trotting along with its owner, tail in the air and probably very surprised to see humans running with no bus in sight.

All that remained was to take in the views as we headed for the turn at the Cavendish and the short run back to the finish, past the two timekeepers without whom we wouldn't get a time.

It's difficult to think of anything better to do at 9am on a balmy Saturday, although volunteering would be one -  this event couldn't take place without the volunteers, and while there are several regulars who turn up pretty much every week at Exmouth, there's plenty of opportunity to have a go yourself. It's very well organised and full instructions are given for each role, so you won't be left guessing what you're supposed to be doing. Give it a go.

12 people completed their first ever parkrun today at Exmouth, and a further 38 completed their first Exmouth parkrun, some having travelled from as far afield as Hastings, London and Wales - congratulations and we hope to see you again. Remember, the weather's always like this in Exmouth (ho ho!).

Congratulations also to Kirsty Bickell, who completed her 50th Parkrun, and to Kate Medlicott and Monica Bristow who completed their 100th Parkrun. The first runner home today was Gareth Davies, and the first lady home Katherine Harris – well done to both of you.

Thanks to the Volunteers

Thankyou and see you all again next Saturday.

* Those more youthful than I may not remember “Piper at the Gates of Dawn” – the seminal album by Pink Floyd, released in 1967. Pink Floyd were one of the most commercially successful bands of all time, and not without reason.

The first October run of the year brought with it a reminder that we're now well into Autumn – steady rain and a strong wind off the sea. Fortunately the wind was more or less across the course, and the rain encouraged the sand to stay on the beach where it belongs, rather than sand-blasting the runners.

151 runners (somewhat fewer than usual, probably due to Christmas shopping!) set off after a mercifully brief briefing, across the grass and down to the U turn at the Octagon. A small army of our amazing (and probably quite damp) volunteers lining the edge of the footpath to try and keep us all off the road. By time we greet Stan at the Harbour View cafe, the field is already thinning out and the wider footpath allows us to find our own pace.

An uneventful run as we splashed past the Splash, with only a few die-hard pedestrians about, dogs preferring to take their owners to the beach now that the dog free period has ended for this year. Past the lifeboat station towards the turn at the flagpoles and before long the first runner is passing us in the opposite direction  (that's OK, he's half my age!).

As we headed back towards town, a large number of kite surfers were taking advantage of the rough weather and onshore wind, so we weren't the only ones enjoying the weather – It must be almost as much fun as running.

Back past the Octagon, first timers probably thinking they were near the finish – no, another 1km to go down to the Cavendish and back to the finish funnel – with strict instructions not to 'funnel duck', although ducks would have been much more at home in the wet conditions.

First runner home was Peter Fletcher, and the first lady home was Jenny Reay. Well done to both.

Well done also to the fifteen runners who achieved personal bests today, pretty good given the weather, and a big welcome to the ten runners completing their first parkrun at Exmouth. A further thirteen completed their first Exmouth parkrun. We hope you'll come back – the weather isn't always like this.

Of particular note, today is the 17th anniversary of parkrun. Little did we know at that time that our Saturday mornings would, some time later, become a highlight of the week, with almost 2.5 million parkrun finishers since then, and almost 350,000 volunteers who made it all possible.  See https://blog.parkrun.com/uk/category/news/  to find out how it all started.

Thanks to the Volunteers

This week 25 Volunteers got up early to make the run possible:

See you all again next Saturday. Until then, enjoy, have fun and stay safe!

It was a slightly overcast and misty drizzly start to the day so just about perfect for a run and hardly a breeze offshore. There were lots of people out and about enjoying their Saturday morning fix including wind surfers, rowers and many who like to take a dip in the sea. There's always something to see happening on the sea-front. Great to see so many eager runners ready to get into their run. Being one of the Timekeepers today, can't see what's going on over the rest of the course but always a pleasure to watch so many happy smiley faces when crossing the finish line, hoping of course I still get the timing correct and don't miss anyone. My fellow Timekeeper kept me in check. Those times and possible PB's are important for many to track their improvement and achievements in age category percentages. I did manage to get my own 5k (not)parkrun in down to the sea-front before set-up so the finish line and timekeeper weren't there when I arrived just before 8am. A quick guzzle of water and time to help other volunteers with set-up, collecting equipment from the Ocean Centre opposite, getting ready for everyone to arrive. There were a few last minute changes needed to the roster and those who stepped in last minute to help Saturday morning, a big Thankyou, you know who you are. We had the minimum required on hand to run safely!

This week 313 participants ran, jogged and walked around our course and crossed the finish line, of whom 46 were first timers at Exmouth including 10 running parkrun for the very first time. There were 50 parkrunners who recorded new Personal Bests and representatives from 30 different clubs taking part from far and wide. 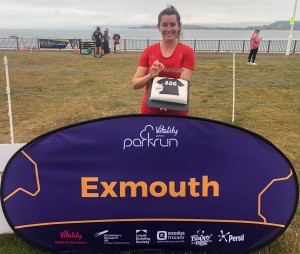 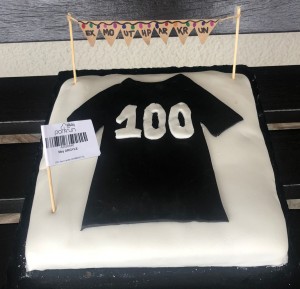 A very big Well done to you all. We really hope you enjoyed celebrating your timed run achievement with us today!

Why not get involved and volunteer? There's a role for everyone, you can also help shadow another volunteer to find out how it all works. Give it a try, you'll be surprised how rewarding volunteering can be.

A full results and a complete event history can be found on the Exmouth parkrun Results Page. for any further information.

Of course, parkrun is all about bringing the community together and being inclusive, having fun and enjoying the moment completing the 5k distance. Remember it's the same distance if it takes you 15 minutes or 60 minutes. There were however a few notable performances out there worth a mention including First Finisher, Ollie Thorogood of South West Road Runners in a time of 16:36, First Lady Finisher (5th overall) was Olivia Steer (Junior 11-14) of Exeter Harriers with a new PB of 19:21 beating her previous best by 5 seconds and the First Junior Male Finisher (15-17) was Oli Clayton in a time of 20:46. Very Well Done to you all.

Thankyou and hope to see you back with us again very soon, next Saturday maybe!

Until then, enjoy, have fun and stay safe.

A big Well done to all 313 participants who ran, jogged and walked our course this week, of whom 37 were first timers at Exmouth parkrun, including 7 running parkrun for the very first time. 47 finishers recorded new Personal Bests and there were representatives of 41 different clubs taking part. Well done to you all. We hope you enjoyed your time with us.

There were a few notable performances including First Finisher Jonathan Parr of Fairlands Valley Spartans Running Club in a new PB of 16:46, First Junior Male was Oli Clayton (15-17) in 20:45, First Lady Finisher was Karen Eyre of Axe Valley Runners in 22:20 and First Junior Lady was Cassia Bridgewater (11-14) in 22:30.

The full results and a complete event history can be found on the Exmouth parkrun Results Page.

Thankyou and see you all again very soon. Enjoy, have fun and stay safe.

This week 367 people ran, jogged and walked our course, of whom 60 were first timers, including visitors, and 54 recorded new Personal Bests. Representatives of 41 different clubs took part. Well done to you all. We hope you enjoyed your time with us.

As we are not able to run a full pre-run brief at the moment due to operating a parkrun covid framework, there may well have been parkrunners who were celebrating a milestone, birthday, anniversary or a special event. If you were one on Saturday then we hope you all had a great time with us in celebration, in particular we know a regular volunteer, Tim Pratt who celebrated his 25th Volunteer occasion (although not at the event) still carried out the Results Processing role from a distance on Saturday. Thankyou Tim and well done, wear your new purple V25 with pride.

A Big Thankyou also goes to all our wonderful 25 hi-vis volunteers who made this event possible:

Today's full results and a complete event history can be found on the Exmouth parkrun Results Page.

Until next Saturday, enjoy, have fun and stay safe.