Do you know the beauty of running at Gedling? It could be many things... the views, the enthusiastic volunteers cheering the runners along or maybe even the post-run breakfast at the Willowbrook.

Everyone has their own but for me it is conquering, in the manner of Sir Edmund Hillary, the twenty peaks of Gedling. The beauty you ask? Well, other undulating runs simply lose their menace. When faced with a tough climb the knowledge that Mt. Gedling has been summited animates weary legs.

Thanks as always to the volunteers who ensured the event ran smoothly. If you fancy volunteering take a look at the future roster. Speaking of the volunteers, while we were playing parkrun bingo we were mostly guessing that there would be between 60 and 70 runners. Young Faith, however, boldly stated that there would be 90 runners. There were sharp intakes of breath and, if we are being honest, slight smiles at the naivety of youth. But, to quote George Gershwin, "they all laughed at Christopher Columbus when he said the world was round... but oh ho ho who's got the last laugh now?"

Boosting our numbers was a large contingent from Peterborough who were up for the Equinox 24 at Belvoir castle. I hope our friends from the flatlands of the fens didn't get altitude sickness.

Good news... all runners remembered their barcodes which meant the results were processed at the Willowbrook in superquick time so we had ample opportunity to tuck into our breakfasts. 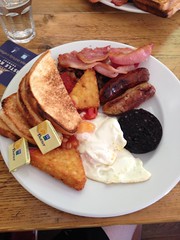 That was the plan but while I remembered the timers, barcode scanners etc. I walked out without my wallet which meant I was bereft of bacon, starved of sausages, missing my mushrooms... you get the point!

There is always next week though at event #15.

Until next week folks...