Can you hear wedding bells? Or is it the PB bell?

This parkrunday was my first time back with the Run Directors hi-vis on as for the past couple of months I had been helping a couple of new events get up and running (Bestwood and Shipley Country Park – you must visit!). I thought it was going to be just a normal parkrun, a bit cloudy and windy with a good handful of runners, well, no, not quite.... We’ve got a car park extension, it was April Fools Day, we had many milestone runs and a wedding party. I shall explain further!!

Over the past few weeks, the Spring Lane car park has been extended again, so the area we used to use for the pre-run brief is now car park. The start area is now quite congested, so I took it upon myself to try something different. I thought we could move the pre-run brief to the end of the car park, and I could stand on the mound and be shouty with the megaphone. I really think that the majority of you thought it was an April fool, the fact that only half of you came to the end of the car park to begin with!

Yes, I felt like that lone nut on the hill dancing away while the rest of you were at the start waiting for the run to commence!

Ben did the first timers brief today and welcomed four newcomers to the world of parkrun. By the time that brief was over the majority of you had sidled along to the end of the car park to listen to the main brief, maybe you realised it wasn’t an April fool or maybe you were just following the crowd!

We will see how it goes in future weeks, wherever the RD chooses to do the brief, please do your best to follow, or you may miss out on an important announcement!

You may have seen the post on Facebook today regarding the use of timing chips, this of course was an April fool, and the majority of you realised this, apart from one chap (who I shan’t name) who came to me for his timing chip this morning. Thank you for being a good sport and seeing the funny side of it!!

One important announcement today was to celebrate those milestone runs. I had already written Mhairi’s name on my clipboard as I knew it was her 50th parkrun today. It turned out that it was also Adam and Rosie’s 50th parkrun too, along with her Dad Pat who was also doing his 50th!

Wow, how fantastic that they were all doing it together, but it doesn’t end there, oh no! Adam and Rosie, as well as doing the amazing feat of running their 50th parkrun, were also getting married! Today!

What better way to start your wedding day than with a parkrun, thank you for sharing your day with us! Of course, if it’s your wedding day and your’re parkrunning, there’s bound to be some family and friends who come along right? Some 30 odd friends and family joined Rosie and Adam today, in case you didn’t notice them, they were the ones wearing sashes and drinking bucks fizz at the end of the run!

Big thank you to today’s volunteers, the event could not happen without them. We had Julie and Ben on the timers, Linda and Nic on the barcode scanners, Julie and Jenny managing the funnel and tokens, Emma, Ian, Eleanor, Charlie, Michele, Jacob and Charlie were your marshals, and Sarah and Kel were tailrunning.

There was some splendid running this morning from 137 of you, the speedy folk were as follows:

16 new personal bests were recorded, despite the wind, though I’m sure I didn’t hear the bell ring that often! Don’t be shy!

One of those ringing the bell this morning was young Aiden, who started at Gedling parkrun on his fourth birthday, nearly a year ago, and has since run 19 parkruns, 15 at Gedling and has got a PB 7 times. And as his dad has to run with him (under 11’s must be accompanied by an adult at all times) this has meant he got a PB too! Well done Martin!

Another bell ringer captured on camera was Tracey Cooper, who took nearly four minutes off her time.

There are numerous photos this morning, which can be found on our Flickr page, maybe some of them will be included in the wedding album? Please do have a look. 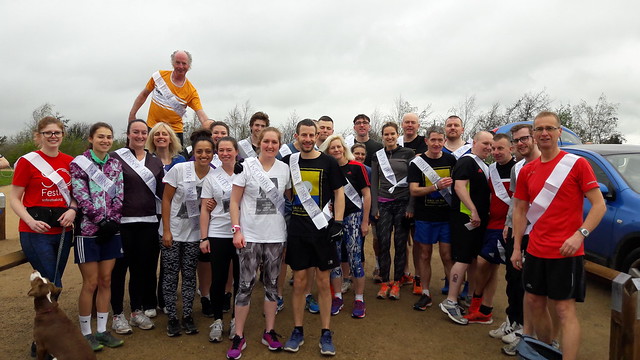 So, after all the runners were accounted for, we cleared up and headed off to the Willowbrook for breakfast. Unfortunately, I started processing the results just as my breakfast arrived, so one of them had to wait! Sorry, I ate it as fast as I could!

Ellie, Adien, Jacob and Charlie busied themselves in a spot of token sorting, and then spent the next half an hour fussing and playing with Lucy the cockerpoo while the grown ups talked about running and stuff.

We did manage to get a good few names down on the roster for the next few weeks, thank you, but there are 5 spots up for grabs for next week, and loads more in the weeks after. If you want to join in the hi-vis action, please drop us a line at gedlinghelpers@parkrun.com or a note on facebook and our volunteer co-ordinator parkrun elf will happily put you on the roster.

That’s it from me, just to say we wish Rosie and Adam much love and happiness for the future from all at Gedling parkrun.