What a parkrun, what an atmosphere! Gloucester City parkun #98 welcomed a massive 345 runners to celebrate International Women’s Day! 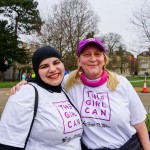 With girls from age 6 to mature ladies in their 80s, 183 females all came together to start their weekend feeling empowered within such a fabulous community with the spirit of This Girl Can. That’s an increase of 77 females over the previous week! Well done to all of you on this day of recognition, including the 34 new runners to Gloucester City parkrun and the 15 female and 5 male first timers.

Of course none of this would be possible without the amazing hi viz pink marshal heroes:

Their support and encouragement every week is much appreciated and no doubt contributed to the 64 new PBs racked up this week, including 3 for the top 6 male and female finishers.  A change in the course with the final lap now being the short lap was well received and will now be permanent. 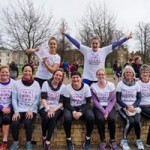 Well done all of you!

Congratulations also to Liz Kirkham who ran her 100th parkrun with us. What an amazing achievement especially on #IWD!

Tourists came from far and wide, with visitors from London, Newcastle upon Tyne, Bristol and as far away as Barcelona! We hope you and all our runners enjoyed running with us at Gloucester City.

A last note to thank those of you who have brought Easter Eggs with you to parkrun. Whilst you’re searching for toilet rolls, please pick up a few Easter Eggs, just 75p half price at Tesco (other supermarkets are available!) to support Gloucester Feed the Hungry 5000 Easter Egg campaign.

See you all next Saturday with your barcodes! 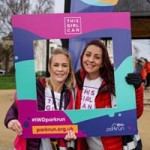 Gloucester City Parkrun always has a great atmosphere, and is very fast to welcome newcomers. Today was no different, as we welcomed Malvern Joggers’ and other tourists from Leicester and Exeter. Sharon also celebrated her 13th leapyear birthday with us which made this event all the more special.

The high level of encouragement from all the volunteers echoed around the park bringing smiles to the faces of the runners throughout the three and a half lap course. Today’s Parkrun was on Saturday 29th February – the next time it will be run on Saturday the 29th February will be in 2048!

It was a pleasure to welcome Gloucester Feed the Hungry to Parkrun this morning, raising awareness of their 5000 Easter Eggs campaign. They need 5000 Easter Eggs to distribute around Gloucestershire, so please bring yours to the bandstand to help spread love and support to all our community. 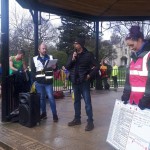 Although we were massively lucky with the weather today, there was lots of standing water on the course which added a different dimension to the running – lots of soggy feet! My job today was as marshal, standing opposite the aviary by the bandstand. I really enjoyed this position as it is so rewarding with all the appreciation people give to you on their way round.

My younger sister, Lucy, was struggling as she approached the last lap, however, with a bit of encouragement she seemed to find a new source of energy. It is inspiring to see the real impact a few words can do.
Today was only my 9th time volunteering, however it has already changed my life for the better – I really feel welcome and part of a family at Gloucester City Parkrun. If you would like to volunteer too, it would be greatly appreciated - just pop your name on the board at the bandstand or let one of the team know.

A massive congratulations to all finishers and volunteers at yet another supportive and
successful Parkrun. Thanks again to Go Outdoors for the kind use of their car park each
week.
Can’t wait till next Saturday!

on this fine clear February day.

Parkrun was the call,

and the runners did all,

When something becomes an easy part of your life, it’s easy to forget how recent it has been, but today it is just the second birthday of Gloucester City Parkrun.

In those two years over 4000 runners have completed over 17,000 parkruns (that’s almost 87 million metres!). For some it has been a regular part of the weekly calendar, both as runners and volunteers; for others perhaps just a couple of laps now and again as they start a new chapter in their own lives.  Whatever the reason for your ‘running journey’ parkrun is there for the benefit of anyone who wishes to take part and we should celebrate that.

Gloucester City was first talked of in 2016 and two years of hard work later it became a reality on 24 Feb 2018.  There are so many who give their time to make this happen, but it’s thanks especially to Event Director Farook Mota. Farook had the tenacity and drive to find the funding, recruit the core team, and maintain the belief that the GL1 area could and would be improved by having its own parkrun. 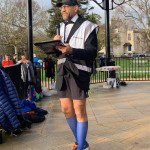 I think we can all agree he was right.

On this very special day 267 participants lined up, enjoying a break from the recent poor weather to get out for a jog, or perhaps just looking forward to the cakes in the bandstand at the end!  As well as a visitors from up ‘north’ where a flooded Plock Court has stopped play for the Gloucester North Parkrun, we were joined by a tourist from Leicester.  The fancy dress for this second birthday party was in full force; including Spiderman, Superman, the Honey monster, a teddy bear, a monkey, fox, unicorn, fairy wings and dracula, not to mention St “Jay” George attempting to slay a dragon or was it a PB?

There was a strong start with the lead-pack setting off at quite a pace, but the competition soon hotted up and positions all changed in the last lap. Looking far too cool for someone training for a much longer event, Jordan Evans came over the line first in 18:54. But the real action was behind this, for the 48 of you first timers and the 47 scoring PBs! Very well done to everyone.

As ever, a great many thanks to those who volunteered their time to set-up and run the event, without names on the roster these events really wouldn’t take place. 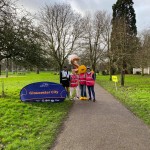 Gloucester City Parkrun will be celebrating International Women's Day on the 7th March!

Come on down and join the GC community, bring as many wonderful women as you can to run or volunteer with us!

We're hoping to have 100s and 100s of inspirational girls at the park showing how amazing we all are!

This week 226 people ran, jogged and walked the course, of whom 23 were first timers and 67 recorded new Personal Bests. Representatives of 25 different clubs took part.

It was a fairly mild morning, especially for this time of year and there was quite a bit of sun and blue sky as well, you would not have thought that there was due to be a storm on Sunday as the weather was so lovely. As usual everybody was very friendly and welcoming and we had another good turn out  at Gloucester City parkrun this morning.

I would just like to say a couple of special mentions; firstly to Robert Dalton Morris on completing his 50th parkrun as a VI guide, 49 of those parkruns have been with myself, and Bex Jones for celebrating her second birthday since starting parkrun. Bex is also a VI guide, and travelled over from Worcester, with her blind friend Dave Williams. After having a chat and a coffee after parkrun, we believe they had a great time at Gloucester City and hope to come back again in the future. Best of luck to both Bex and Dave, who will be taking part in the London Marathon on April 26, 2020 together.