Unfortunately the river has escaped and is flowing over our course. The path is somewhere under there. We have little choice but to cancel the event on the 18th January. I'd like to say thank you to all of the volunteers and we look forward to seeing everyone on the 25th. 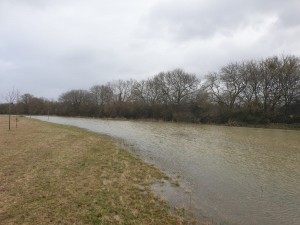 We regret that we have had to cancel our plans for a Christmas Day parkrun. The river is in full flood and this has made a significant part of the course impassable. While it is possible that the levels might recede over the next 36 hours we feel it best that participants and our volunteers are able to plan alternatives in advance. The Great Denham team wish you a very Happy Christmas.

UPDATE - We are sorry that we have had to cancel the Christmas Day parkrun due to heavy flooding. Please keep checking regarding New Years Day.

We're thinking ahead to the most wonderful time of the year when we get together for some special runs in the park. The Great Denham team will be out on both Christmas Day at the regular time of 9am and New Years day at 10:30. We're now looking for volunteers to make sure the events can go ahead because as you can imagine some of the more regular volunteers will be away visiting family and friends, or just having a well earned break.

Tweet
It's been many months since it poured down at parkrun o'clock.  Fortunately, today we were treated to just a slight mizzle, which, to be honest, once we had started parkrun, had fizzled out.
As today's Tail Walker, a compulsory role on all parkrun volunteer rosters, as well as being a member of local run club - Bedford Harriers AC, I arrived a lot earlier than normal to put up the Harrier's tent and flags and was glad to shelter from the wind and wetness drifting from the sky. Not only did The Harriers fill many volunteer roles, as part of their parkrun Takeover, members stood in as pacers (ten in total) to assist today's runners. 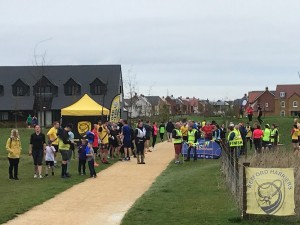 Soon the Run Director arrived with her trolley and after stopping briefly at the start line (probably to put the start sign up), Sarah Roche arrived at the finish area. Between us, we built the finish funnel, ready for the first finishers. By this time, dozens of participants had arrived and soon it was time for the runners' briefing.
Sarah thanks the Bedford Harriers for filling this week's roster and everyone congratulated 7 year old birthday boy Ethan. Today would be his 26th adult parkrun and tomorrow, he planned to complete his 100th junior parkrun at nearby Bedford juniors parkrun. Also receiving a round of applause was Louise Joanne Kemp - today marks her 100th completed parkrun. Well done to you both! 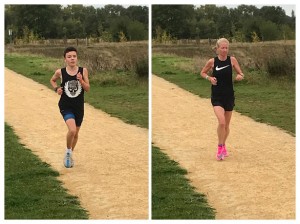 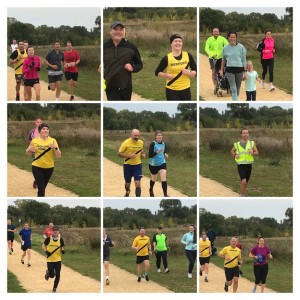 According to the results, 23 people visited Great Denham parkrun for the first time, and of those, seven were attempting to complete their very first parkrun. Welcome - we hope that you will come to love parkrun. There were 4 unknowns in the results today - perhaps they didn't want their times recorded, they forgot their barcodes, or were just trying out parkrun before registering. Whatever happened, the golden rule of parkrun is #DFYB (don't forget your barcode) if you want to be included in the official results.
Jacob Preston, Ian Tull, Matthew Kemp, Derinda Bullen, Peter Brereton and Caroline Watson all completed their 8th parkrun. As Tail Walker, I at best, had a brisk walk although the same cannot be said for Eliud Kipchoge, who was attempting to become the first human to ever run a marathon (so 8 consecutive parkruns) in sub 2-hours. Admittedly, he was in Vienna, and I was still within sight of the Great Denham parkrun start line but I whipped out my phone and a few of us watched his final minutes. Eliud Kipchoge was smiling (ie in pain), as his pacers peeled off and he became the fastest man to complete a marathon in 1:59:40.2. To put this into parkrun language - his target pace for every 100m was around 17 seconds and he was clocking 14m13s for every parkrun (5k). According to parkrun stats only 5 of the 51,363,611 5k parkruns completed (excluding 50 wheelchair and 15 assisted runs), have been faster than Mr Kipchoge's pace
Eliud Kipchoge had 41 pace-makers to assist him in making history and Great Denham parkrun, broke a new record too - 28 people donned high-viz. Thank you to the volunteers not already mentioned - John Haggerwood, Jazmine Clark, Helen Whiting, Tom Brassington, Elaine Massie, Steve Crane, Hannah Woodrose, Beverley Gous, Sara Brister, Ian Woodrose, Richard Lawson, Joanne Gould, Balbir Khinda, Sam Austin, Caroline Musgrove, Ethan Masih and Peter Pack.
If you'd like to find out more about the Bedford Harriers Athletics Club - check out their website.
If you are interested, you can also enter the Bedford Harriers Half Marathon, which takes place on 1 December 2019, and costs £23-25.
If you'd like to see ALL the fantastic photographs from today's event, please check out: Google Album. Thank you so much to our photographers - Peter & Balbir.
Beverley Gous A862069
Tweet

We were lucky to have Paul Woodward act as photographer in our volunteer team this morning.  Many of you will have seen him at the second marshal point, where he captured your image as you lean in to take the corner (or cut the corner).

Take a look under the Community tab on Great Denham parkrun's Facebook page and enjoy.