We've compiled some of our favourite local races and events here as well as included some useful links to other sites that list races.

Have you run a favourite race that's not listed here and want to include it? Ping us an e-mail to greatnotleyoffice@parkrun.com.

Check the event websites regularly for when entry is open, some of these events fill up really quickly. If you've missed entry into an event, make a note of it for next year.

You've missed these, but think about adding them in your diary for next year?

Heydon and Otto have attended most of the Great Notley parkrun events since we launched, so many of you noticed their absence, especially as Otto was a bit ill the week before. 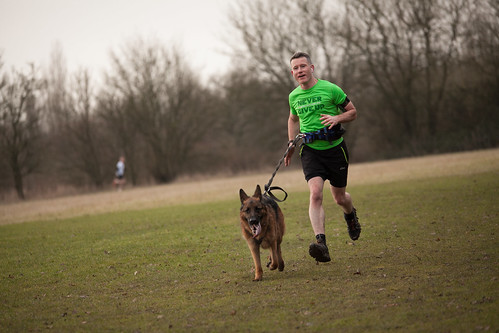 But fear ye not, they were at a K9X 5km event at Hylands Park, and whilst there the ever so modest Heydon doesn't mention it in his write up below, they came first. Not only did they come first but looking at the results page seems to show them finishing 2 mins 27s ahead of second place! I'll hand the page over to Heydon...

Saturday arrived and an excited Otto looked confused when we turned the wrong way and headed off to attend the Colchester Canisports Race Series instead. The route was a muddy 5k loop in Hylands Park which although sounding serious was actually a lot like parkrun; good humour, mixed ability, friendly and very muddy... the only difference being that everyone had a hound attached.

Canicross is just cross country running with your dog and requires three bits of kit- a belt, a running harness and a bungee cord. Running with the right kit makes it sooo much more fun for dog and owner and a lot safer for the dog too because the harness doesn’t restrict breathing, rub or pull in the wrong places the way a non-pull harness or collar will. The bungee cord works like a shock absorber- essential once the hound gets the hang of it.

Details can be found here for the next race on 21st March. http://www.k9x.co.uk/

The closest Canicross group is Colchester Canisports (on Facebook). Where a group of all abilities, just like parkrun, meet most Sunday mornings and for regular night runs. Kit is available to borrow and try.

Details on canicross can be found here. http://www.canicross-scotland.co.uk/canicross-resources/

So if you run with your dog, this might be something you might want to explore further.

Whether you run with a dog or not, we'd love to hear how you get on if you've entered a race or training for a race.