My name is Henry Parker and writing this week’s run report has brought feelings of honour and pride as parkrun is such a lovely event to be involved in. Being a volunteer, I get to witness and experience the hard work and effort put into to organising a community event such as this. All the other volunteers work as hard as possible to complete their tasks to the best of their ability, some of which include barcode scanning, tail waking and marshalling. My personal favourite tasks are marshalling and tail walking. Being a marshal, you get to encourage everybody who passes by and tail walking gives the opportunity to have a good chat while ensuring nobody gets lost or injured. This week I was tail walking and even though the gentleman we were walking with was further behind everybody else, he kept going and never stopped. As we approached Paul Tatler, shouts of encouragement streamed our way such as, ‘You are a lovely man, soaring on the winds of your ambition’, very encouraging and it certainly filled us all with a new wind.

At the beginning of the run, an amazing brief was given by Rob, the run director, with the usual do’s and don’ts, and shout outs were given to milestone achievers: Mike, Fran and Anna (50th), John and Lucy (100th) and Julian who was about to embark on his 250th run, incredible. I always find it really inspiring to hear these special shout outs and it's this personal support that makes parkrun so special. The weather was looking a bit threatening and it started to drizzle but very quickly the sun came out and everything brightened up again! After the briefing, 418 people lined up to begin the run. Everybody ran, jogged or walked the course and among the 418 runners, 58 were first timers and 37 personal bests were achieved and 41 representatives from other clubs joined in the Guildford parkrun. 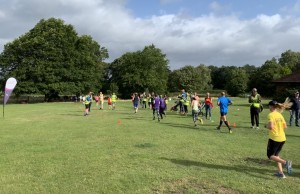 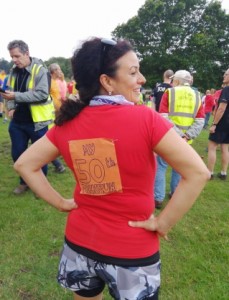 Fran prior to her 50th

This week 418 people ran, jogged and walked the course, of whom 58 were first timers and 37 recorded new Personal Bests. Representatives of 41 different clubs took part.