Guildford parkrun number 4 since lockdown lifted, and it is clear to see everyone’s still buzzing to be back.

Unlike the week before, we were today treated to glorious sunshine for 9 o’clock, and thankfully it lasted more or less for the duration of the run (even though it had disappeared by the end and was replaced by some drizzle ☹).

As we all stood at the start, waiting for the honk of the airhorn (whoever’s idea that was – you deserve a medal!), it was fantastic to look around and see hundreds of people chatting and
laughing… it has been too long since we’ve seen those scenes.

A slightly slippery first leg across the field gave way to blissfully dry concrete and near-perfect conditions underfoot. Once this sun gets going, it doesn’t take long to dry things out… including runners! I for one realised just how warm it was in the second lap, and even started hoping for a bit of rain to cool things down!

A massive thank you to all the volunteers who made this parkrun possible. From tail-walkers to
barcode scanners, you are the priceless gems in the parkrun crown… thank you!  And huge congratulations to anyone running a milestone run - which included Richard Rowe, pictured here with his son, daughter, and son-in-law, who ran his 50th (though we think the '0' of his balloons was the one seen disappearing skywards shortly before we started......) 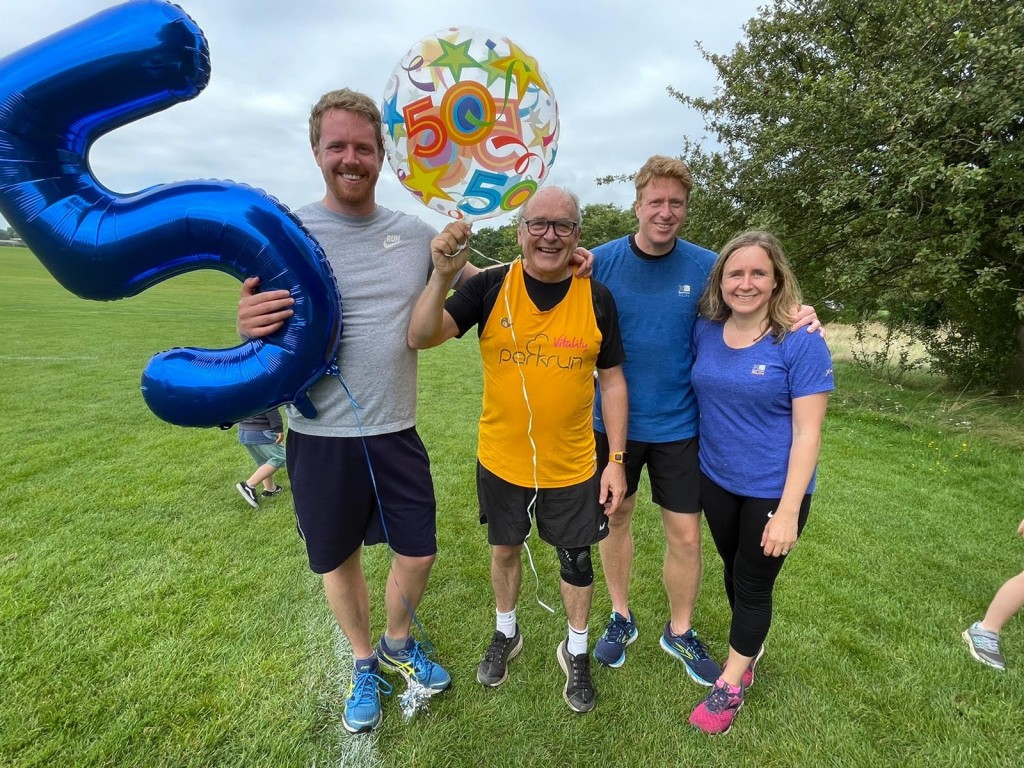 To summarise, today was a good day for new parkrunners – it’s fair to say the first-timers’ briefing was busy, and congratulations to all who got a new PB and to everyone who achieved a milestone.

Roll on next week!
By Carter Coles.