CHANGE OF ROUTE (again!) Due to the upcoming Gunnersville festival, we will use the out and back course on Saturdays 31st August & 7th September. The meeting point is at the top of the park, near the car park. 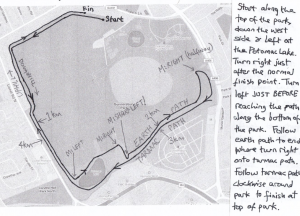 This week Gunnersbury parkrun celebrated its 400th run. And what a corker it was! When looking for a location to visit and finding out it was such a momentous occasion it would have been rude not to attend. I’d also heard rumours of cake and who doesn’t love a post parkrun treat?
There was also the lure of a special course to mark the occasion, a C shaped out-and-back for everyone who attended to enjoy. 687 people ran, jogged and walked the alternative route – whilst doing so setting a new attendance record, and only narrowly missing the top 10 most attended parkruns this week.
31 people were doing their first ever parkrun. Welcome to the family John REILLY, Henry HOLDEN, Chris BOURCHIER, Chris ONG, Willian COLYER, Harvey MESSENGER, Antonio NICCOLI, Jahanur RAHMAN, Babriel GONZALEZ, Hari SUNNER, Mateusz FLORCZAK, Natalie KEEP, Tony BREWSTER, Valentina ROJAS MORENO, James STEPHENS, Paul SMITH, Cy Tyson MORRELL, Charlie LENNON, Ezana DESTA, Barry LEMMON, Sarah KHORSHID, Paulina FILIP, Ryan EDWARDS, Richard EDWARDS, Alec YOUNG, Brigitte FLOCK, Alessandra FIORIO, Miriam PAYNE, Sally BETEY, Lynn GOODMAN & Belinda MCLAUGHLAN. We hope to welcome you back to Gunnersbury soon.
56 of the field were visiting Gunnersbury for the first time and 68 new Personal Bests were recorded, 41 different running clubs were represented.
Milestones collected at this event included:
10 – Lily HILL & Tadhg CUTHBERT
50 – Barbara RALPH, Brenda LAMBERT, Ishbel GALBRAITH & John KENNY
100 – Kathryn KEENLEYSIDE, Lisa GROVER & Thomas HORREX
200 – Shivaun O’SHEA
250 – Christopher HILL
Congratulations to all of you, what wonderful targets to have hit.
First finishers this week were:
An Unknown Runner finished first (no barcode = no time)
After this:
First male finisher was Ewan FRYATT in 17:01,
First female finisher was Rose PENFOLD in 18:24
First Junior finisher was Raj PATADIA in a wonderful 22:57.

I always like to look through the results for numbers that are aesthetically pleasing so here’s a few - there were so many this week it was hard to pick.
Martin PECK 20:02
Jonathan ELLIOTT 22:22
David RUSHTON 25:25
Kim CLARK 25:52
Chloe THORNE 31:13
Ishbel GALBRAITH & Jessamy CARLSON both in 34:43
Sarah PROPHET 34:56 (my personal favourite this week)
David CRANE 52:52

Thank you to Gunnersbury parkrun and its team for a wonderful event. If I'm not back before - which I’m sure I will be – I’ll see you for 500.

You may need to go and grab a coffee/tea/wine/whatever - this is going to be a long one! There is SO much to say about a brilliant morning at Gunnersbury.

We visited today for the first time and we loved it! A visit has been on the cards for ages but the need for a parkrun starting with “G” prodded me into action.

So, as if this morning wasn’t good enough already, I’m now the proud owner of a “Stayin’ Alive” badge! (Not sure what that is? Click the little icon below). To celebrate this milestone, you’ll see a bit of a theme below!

All through the night Run Directors, volunteers and parkrunners alike were kept awake by howling winds and concerns about what dawn might bring. Neighbouring Osterley had already cancelled and Gunnersbury was on standby. True, it was very breezy, but it wasn’t raining, it wasn’t freezing and no trees were down. Much to the relief of 541 participants we were good to go. (Curiously the last time we had 541 runners was exactly a year ago.)

Of these 32 were taking their first ever parkrun steps, 48 were visiting from as far afield as South Africa and 23 completed their important 2nd parkrun! Well done to all.

"More Than a Woman"

This week’s excellent Run Director was Kay LYDALL and in her opening brief she let us all know that today was Arlene GALLAGHER’s special, milestone birthday. Three very well deserved cheers were given. We all have Arlene to thank for Gunnersbury parkrun - her drive and enthusiasm set the event up almost 8 years ago, and since then more than 14,000 people have taken part, with many having their lives changed for the good in ways they might not have imagined. 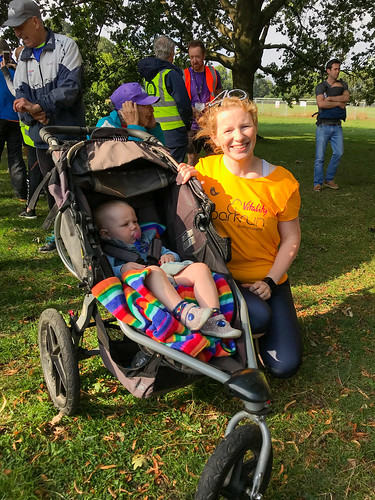 Arlene and her lovely (and very speedy) daughter

"You Should be Dancing"

Since Gunnersbury parkrun has been set up 399 events have taken place - next week is the FOUR HUNDREDTH. That is a big deal. Time to celebrate! There will be dancing (maybe), cake (almost certainly), festivities, and as a special treat there will also be a different course. Watch out on facebook for more news on how this fantastic milestone will be marked. "How Deep is your love"

We’ve all seen the hashtag “#loveparkrun”. It’s a force for good, uplifting and life affirming.

This morning it was a pleasure to meet Gunnersbury parkrun legend Alan Anderson. Alan is 84 and last year became only the 17th person to complete 500 parkruns. He’s also volunteered over 200 times and could still give most 2 decades younger a run for their money. His wife Anne has been a keen supporter of parkrun herself, unfortunately she struggles to walk now. So that she can still enjoy her Saturday morning parkruns Alan pushes her round the course in her wheelchair. They are normally at flatter, smoother Osterley but as it was cancelled Alan came back to Gunnersbury, undeterred by the less forgiving course. If that is not inspiring or heartwarming, I don’t know what is. 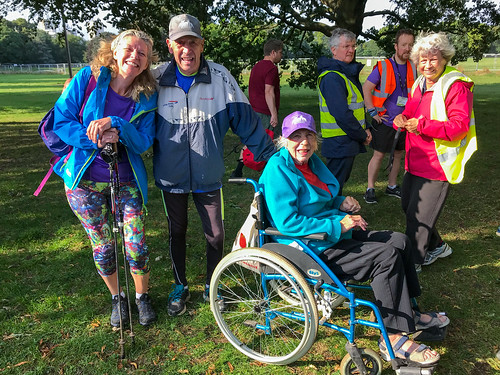 Also showing love, in a different way, was the fantastic team of volunteers. Many were taking on volunteer roles for the first time ever - and hopefully found that it brings its’ own rewards.

If you’d like to show a bit of parkrun volunteering love then drop an email to gunnersburyhelpers@parkrun.com to find out more.

Everyone was great, and I’d like to give a special mention to Andrew LAWRENCE and (signing) Wendy SCOTT for one of the best First Timers briefings I’ve heard (I need to up my game!) and also to Laura MEZZALIRA and Charlotte GILLILAND for being the most cheerful token hander outers.

Jive talking, apparently, is to stray from the topic a bit. Well.....my home parkrun is Tring and we were struck by a few things. Like Gunnersbury it runs on what used to be Rothschild parkland; they both have mansions, they both even have “temples” and they both have museums nearby. Tring’s houses the world’s largest collection of stuffed animals (seriously). We (me and my wife Moira) really enjoyed visiting the museum in your park - they’ve done a great job with it.

Tring has deep and ancient roots - at the intersection of the ancient Ridgeway, Icknield Way and Roman Akeman Street. We were surprised to find that there have been even more ancient traces of people running about Gunnersbury Park - for 440,000 years, albeit clutching flint axes and not barcodes. 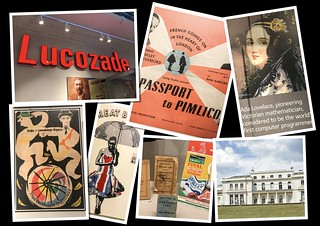 OK - back to the parkrun and some notable results.

It’s not a race. But its always interesting to see how rapidly some people can cover 5k! First female finisher this week was Melissah GIBSON in 18:29, for the men Joe CARTON was handed token number 1 just 17:18 after Kay shouted “Go”.

Being an old timer I always sort the results by age grade, where we see a different picture. Jane ROWDEN led the way for the ladies with an impressive 85.95%, and Alan Phillips led the charge for the men on an equally impressive 78.45%.

Milestones: I don’t know if anyone else earned a “Stayin Alive” badge but I do know that both James WRIGHT-SMITH and Katy STIRLING completed their 100th parkruns and earned a coveted black T-shirt. Good work.

Surprisingly there were no more milestones runs this week….but, by the looks of things a whole lot stacked up for next week. 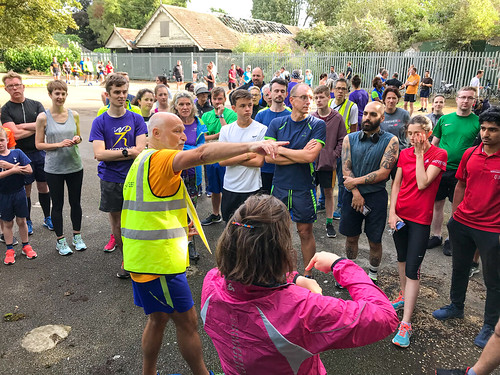 They tell me that any dancing - not just DISCO - is all down to keeping rhythm. With that in mind I award a special prize to Stephen PRICE who finished with a syncopatingly, beat-keeping time of 23:45! 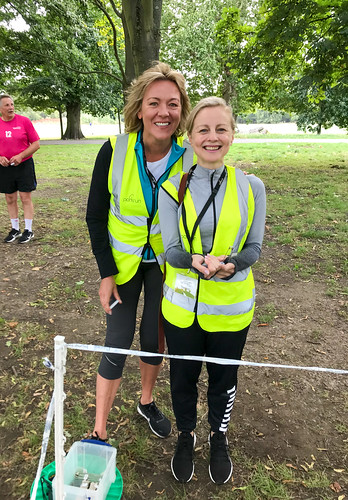 THANK YOU Gunnersbury for being brilliant.
We enjoyed our morning and will be back.

This weeks run report below, but before that a quick (belated) well done to the incredible Jane ROWDEN who on the 22nd June at event number 392 created the best age grading performance to date at Gunnersbury 92.82% ... we couldn't let that slip through without a comment ... the full table here: https://www.parkrun.org.uk/gunnersbury/results/agecategoryrecords/

... and so on to the report ... a huge Thank you to Raj Patadia for this week's run report:

Weekend. Saturday. parkrun. The countdown to 400 is on.

As always the volunteers had already worked extremely hard setting up the course for the many runners who were slowly tumbling into the starting point. The short and sweet first timers briefing was delivered and the scene was set for the start. The start of two paths were filled by runners who were rearing to go. The run director began to give out notices and we congratulated those reaching their milestones

Andrew Graham SELL for his 250th run as well

Well done for your respective milestones.

... And the hush swept across the field of runners and then GO!!! Quickly, the field began moving through the journey which is a 5km run. Some quicker than others but all hold the same value. Crossing the halfway stage is satisfying but the hardest part is always the final bend around the second pond. The funnel comes into sight and the runners infest it with the harmony of heavy breathing.

Unfortunately 38 runners had no barcodes this week so had the Unknown in the name column.

The total distance ran today 2480km which would get us to from the middle of Gunnersbury Park to Istanbul Airport (in a straight line).

With today’s parkrun the total numbers of runs at Gunnersbury now equal 129,412, which is equivalent to going around Earth’s equator approximately 16.1462258266 times !

Thank you to all our wonderful volunteers ... the list here below:

Saturday's full results and a complete event history can be found on the Gunnersbury parkrun Results Page.

Lovebox and Citadel festivals are coming to Gunnersbury park and therefore the parkrun will be using a different route on 6th and 13th July.
The start and finish will be on the grass near to the main entrance leading to the car park.
If you are joining us on those dates, please allow yourselves enough time to find us. Please note the pedestrian entrance off of Popes Lane opposite Elderberry Road is still closed.

The alternative route will be similar to the 'winter route' previously used for many years however, there will be an out-and-back section where you may meet others coming in the opposite direction. Please take care. 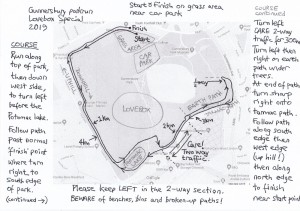 You may also want to consider a bit of parkrun tourism such as:
On the 6th July our neighbours Osterley parkrun are celebrating their 300th event using a special one lap route, taking in the gardens of the National Trust. There will be cake... 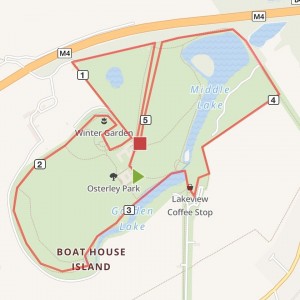