View from a Local Tourist

The home page of every parkrun lists the closest other parkruns, and I have been gradually working my way through the list from my local run. With the growth in popularity of running, new parkruns have sprung up in a number of places, and it is just over two years since I noticed that Hadleigh had appeared, and it was only 11.4 miles away. As the crow flies. Unfortunately, there is something called the River Thames in the way, and the diversion via the Dartford Tunnel nearly caused me to miss the start, as one of the bores was shut.

Great Lines is probably within sight of Hadleigh (on a clear day). It’s in Gillingham (Kent), but was named Great Lines as that is the name of the former MoD training ground, now turned local park, where I usually run. Not Medway parkrun, so that another one could be set up, if there is sufficient demand, and not Gillingham, to prevent people from driving around Dorset, looking for us.

Fortunately, this morning, I knew exactly where I was coming to, so no concerns on that matter, and as a native Southendian, today’s run fitted in well with the early kick-off time at Roots Hall. I had done a little bit of homework on the course, but as a veteran of the Benfleet 15, I already knew I was in for a run which started downhill, and finished uphill. Nevertheless, I joined the First Timers’ Briefing, where Bob Morris cheerfully let us know that there were 19 harder parkruns in the country (I did the hardest, Lanhydrock, when I was on holiday in Cornwall last Summer). After that, I went and said hello to Run Director, Gary Bright, so he knew that his roving Run Report Writer had arrived, and after a few rounds of applause, we were off. 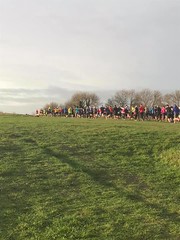 I set off fairly near the back, as I am one of those few people who prefers running uphill to down, and I wanted to have plenty of energy left for the final climb. The little twists and turns made for an interesting course, and I was ready for those little climbs on the downhill section. The marshals’ encouragement clearly showed they were enjoying themselves as well, although I’m not sure the shout of “You’re nearly there” at the bottom of the green hill was quite as truthful as I was wishing a hundred yards later. Nevertheless, as I had set myself mentally for a climb all the way to the top of the zig-zag path, the finish appeared suddenly, so I used my reserves of energy to increase the pace in order to avoid being outsprinted by those I had passed on the green hill and beyond. 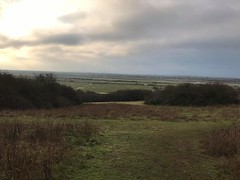 After the run, I took the time to chat to a few locals, take the obligatory selfie, cheer on some of those behind me into the finish, and then study the Kentish coastline to see if I could spot Egypt Bay and St. Mary’s Bay on the other side of the Thames (I had run there on Friday afternoon, and had done much the same looking across the water in the opposite direction). They were just about visible. After that, it was time for the post-parkrun coffee, and then on to the football (the less said about that, the better).

One of the things I really enjoy about parkrun, in general, is the atmosphere of encouragement, and the complete mixture of people who take part. It has also given me several hundred other new places to run, and loads of new friends. It was clear from those I saw, and spoke to, that the spirit of parkrun is alive and well at Hadleigh. Thank you to all involved at Hadleigh parkrun for an enjoyable run, and maybe one day, I’ll get to see some of you at Great Lines; after all, it’s only 11.4 miles away (and our finish is downhill!) 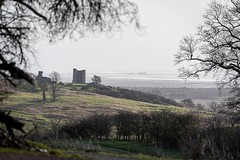 This week 171 people ran, jogged and walked the course, of whom 15 were first timers and 39 recorded new Personal Bests. Representatives of 20 different clubs took part.