As this is a particularly special parkrun for me I asked if I could write the run report, so here goes.

It is the 3rd of August, just a normal parkrun morning at Hadleigh, the sun is shining brightly and the cows have paid us their usual timely visit. Yet again another brilliant turnout for this week’s run with only one milestone, but it’s a big one, Martin England ran his 100th at Hadleigh and his Castle Point Joggers running club turned out in force to celebrate this event. This shows the benefits of belonging to a club, enthusiasm, friendship, inspiration, support, encouragement all from a pure running family.

There were 174 people out and running for Hadleigh Parkrun #141, with 9 parkrun newbies in amongst the 28 first timers today, and 21 recorded new Personal Bests, a massive well done. Representatives from 13 different clubs took part, largest club obviously was CPJ with 41 runners, but sadly we welcomed no tourists. But wait, we did actually have one special tourist, CPJ's Albert Miles paid us a visit, a first timer at Hadleigh, ending his hundred plus consecutive parkruns & Volunteering roles at Basildon, just to celebrate Martin England's 100th and finishing first in the MV80-84 category, setting an Age Category record for Hadleigh of 37:09, thank you Albert and glad you enjoyed the hill. See you back here soon.

Quickly back to the results from today, first finisher amongst the men was Crispian Bloomfield 17:44 and for the women was Freya Seymour 22:08 and since it started in 2016 2,827 participants have completed 18,152 parkruns at Hadleigh covering a total distance of 90,760 km, including 3,670 new Personal Bests.

All of this has been made possible by the fantastic individuals who have volunteered, without the hard work from our core team and our weekly volunteers, there wouldn't be a parkrun so a huge thanks to this week's wonderful volunteers.

Great to see young Fenton Hopkins in his role as Run Director for his Duke of Edinburgh Award, with a lovely speech at the end about the 100th parkrun milestone runner from Dave Flanagan.

That was about me, Martin England, my personal story started on 5th June 2018, having been running for many years including marathons and ultras; I suffered a Cardiac Arrest after a 3K race. Thankfully I was next to a nurse who carried out CPR, with access to a defibrillator close by ( a very useful item, please note they have two defibrillators at the Hadleigh parkrun event and the main volunteers have CPR training ). I woke up in Basildon Hospital the next day, diagnosed with CAD, had two stents fitted and left hospital four days later with broken ribs and a lifetime of tablets. Next stop Cardiac Rehabilitation and trying to get back to some normality. I started by walking, then a little jog, more jogging, less walking, all part of my own CA to 5K program. Three months later I am back running the Hadleigh parkrun, home at last, a little slower than my PB but the enjoyment is immense. Fourteen months later, having run another 32 parkruns since my CA I finally reach the 100 parkrun milestone. parkrun has been one of the biggest factors in my recovery, the support and enthusiasm by all just inspires you to succeed. Being sensible obviously, but feeling safe with parkrun friends around me, my running continues to improve. Many times over the last year I would not have thought this would be possible but everything is possible, stay strong and believe, thank you parkrun for the support. Also thank you to each of you who congratulated me on reaching the 100th Hadleigh parkrun milestone today, my parkrunning family! 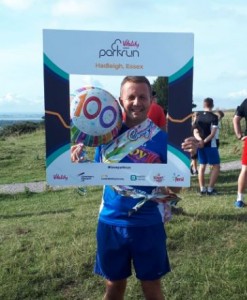