It was a cold wet morning, sometime in the middle of February (most mornings during the month fitted this description), when the frog chorus was at full strength (a frog chorus is something like the dawn chorus, only croakier and wetter) “.... do, do, do.... do, do, do....  la – la- la”, the frogs were busy deciding what they might do with their extra day at the end of the month, as it was a leap year.
Without the aforementioned extra days added to the calendar every four years February would drift into the summer – with the weather as it currently is, I can see a benefit to that, but where would that leave our summer?
Anyway... one of the frogs, Kermit, had heard that the only place to be this leap year was The Haldon Forest parkrun. The other frogs were not aware of this amazing event so Kermit proceeded to tell all the other frogs about Haldon Forest, a beautiful woodland covering 3,500 acres, just 15 minutes from Exeter. Kermit explained how the parkrun followed the trail paths through the forest for a mere (!!) 5000 meters, the lovely views they would get to see across the Exe Basin, not just once, but twice as the route doubled around the forest. All the other frogs thought that Kermit’s idea for the leap day sounded just perfect.
Leap Day arrived and Kermit and all his “froggy” friends descended on the forest, it was a cold one, but this did not deter the hardy frogs. It was not just Kermit and his friends that went along, there were many frogs and others celebrating leap day too!
It was 9am and everyone, frogs and all, were under starters’ orders, leaping into action. The runners, hoppers and walkers were on their way, enjoying the gentle downhill at the start. It was all going well for everyone until they turned left and were faced with a steep narrow path – Kermit had neglected to mention the short ascent, or how steep it was. It was tough for some of the frogs but “Side by side, hand in hand, we all made it (stand) together”.
Being overtaken by the front runners before we had made it as far as the rhododendron tunnel was a first, but “Win or lose, sink or swim, one thing is certain we’ll never give in”. As ever we were rewarded by the views, before entering the stoney descent. For the first time ever at Haldon Forest parkrun I did get wet feet and momentarily considered that perhaps trail shoes might have gone down well on this bit of path – but I’m sure the frogs hardly noticed or were even thankful for conditions more suited to amphibians.
The second loop, a little lengthier than the first, with another, longer, but perhaps less steep ascent – another hill Kermit had neglected to mention to his “froggy” friends. A second rendition of our favourite song helped us to the top “Win or lose, sink or swim, one thing is certain we’ll never give in. Side by side, hand in hand, we all stand together. Do – do-do, Do- do-do, Do- do-do- do-do, Do- do-do- do-do”. Before long we were on the home straight and the finish was in sight. Then over the line and we had completed another parkrun with the help of friends, frogs and not forgetting the all important volunteers. This week saw a volunteer milestone – 25, for Rona McIntyre. Thank you Rona!
According to one famous frog, “It’s not easy being green” but this leap year day I beg to differ, all the frogs appeared to have a fabulous morning at Haldon Forest parkrun – but don’t take my word for it, come and try it for yourself! 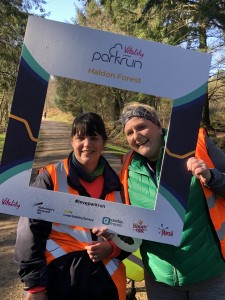 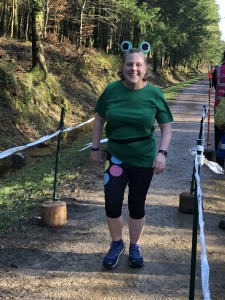 Frog on the timeline!