If you haven't signed up to our mailing list yet, it's the best way to be informed about HHpr news. It's very easy to do ...

If you don't remember your password, don't worry! There is a reset function on the Sign in page.

We always talk about parkrun being free, forever, for everyone. That said, running the event every week is not FREE. We do incur minimal costs from time to time such as vital supplies for the first aid kit and defibrillator, signs and barriers, flags and safety markers for the course.

There is no central funding pot for these things that help make the event happen. There is a donations process for us to keep our supplies topped up and develop the event.

As an event team we are constantly on the lookout for ways to make the event better, safer, more inclusive and every now and then we want to buy things to facilitate this. Our ability to do any of this is completely dependent on your generosity and willingness to support the event. Without your contributions we simply cannot do any of these things as we do not have access to the funds to do it. We have a massive community of over 20,000 runners registered to parkrun with their home run as Hampstead Heath, and about 300 currently participate in the event every week. If everyone (even half of them) gave us £1 or £2, we would be set for the next few years! If you can spare a pound or two and are willing to donate to support the event, you can donate by visiting the link below and clicking the donate button:

Please note that it is parkrun policy that no one in the event team or volunteering at parkrun can handle cash. We can only accept donations via the online platform.

All of our expenditure and donation are published on the parkrun site – this pot is purely there for us to develop the event and keep our supplies topped up.

We really appreciate your support for our event!

This week 238 people ran, jogged and walked the course, of whom 61 were first timers and 29 recorded new Personal Bests. Representatives of 23 different clubs took part.

A catch up on notable recent milestones follows the volunteer section below.

The event was made possible by 21 volunteers. Is this the best ever ratio of volunteers to runners? Long may it continue…

Damien Lane stepped down as one of the three overall event directors with his last weekly stint as a run director on 30 November. He has led HHpr’s volunteer team for a few years while marathoning and ultra-marathoning on the side. We wish him all the best for his next challenges, including another Comrades in S Africa. He marked his farewell with the best volunteer roll of all - folding up the filthy ground sheet – see photo 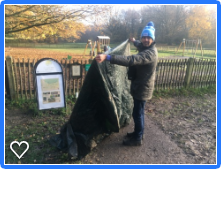 Nina Simmons JW15-17 ran her 100th parkrun at HH today, a long way from her usual home in Lower Hutt, Petone, across the harbour bay from Wellington, New Zealand.

Jason Vessey, travelled down from Yorkshire to run his 50th as HH.

21 December
Angela Pollitzer notched up her 250th parkrun with another 70%+ AGS. Her gingerbread celebrations with her family are in the photo. 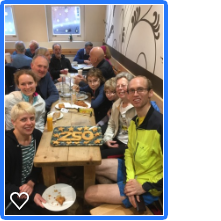 Paul Sants reached 50 parkruns but was gallingly 1 second short of his pb, for the second week running. At least he got over 70% AGS for the first time with those two runs (age has some benefits).

Harriet Williams ran her 50th too.

Toni McIntosh from Ayr in Scotland ran 20:00 (the most annoying time possible) to set a new VW40-44 record on 14 December.

Austin Soane set a wonderful VM65-69 record of 20:39 (81.19% AGS) on 2 November. Based in Frimley Lodge, Farnham, where over 200 of his 308 parkrun have taken place, he has been a tourist oin some 50 other parkruns. I wonder how many age records he has on different courses?

Today's full results and a complete event history can be found on the Hampstead Heath parkrun Results Page.

The eagle eyed among last Saturday's runners will have noticed a somewhat familiar figure loitering at the start and around the course as we ran last week's event.

It was none other than the great Dave Bedford, former 10k world record holder, a later Race Director of the London Marathon. He was not scouting the faster runners (though with three men under or around 16:34 he might have been doing that as well), rather he was there to help the Heath management assess the event and help the RD team to think of ways to mitigate / reduce the disruption to other Heath users which has become a larger issue as we regularly attract over 400 participants to the Heath.

The visit, together with a rather damp and chilly walk round the Heath has encouraged us to do two things;

1. We need to deploy more Marshals around the Heath. These marshals will be scattered around the course, particularly at pinch points / crossing points where potential disruption are most acute. These marshals will be mostly outward facing, ambassadorial roles (in addition to the current run focused role), who will - ideally - talk to other users of the Heath, explain what parkrun is, explain what an amazing thing it is - how many people run it in London / worldwide, what it is so brilliant etc etc, as well as warning other users ahead of the start that a wall of runners is about to come hurtling down Lime Avenue. This will mean that we need to have more volunteers each week. But as we all love parkrun, and acknowledge that for it to continue we need to do our part to minimise the disruption and build relationships with other users, I am confident this will be possible. This week's response has been amazing. Please shout an extra thank you to the volunteers this week - they are awesome!!

2. The start was pretty muddy this week - if you hadn't noticed. We think we may have found a new route (even hillier, of course) which will involve starting in roughly the same place, but finishing a little distance away, so stay tuned as we firm up thinking on this.

In the meantime, thanks for reading to the end of this long message!!

And don't forget your barcode.

Hi All. A reminder that there is no parkrun on the Heath tomorrow due to the Jubilee Trust events. We'll be back - better than ever - next week. Have a great weekend. The RD Team.