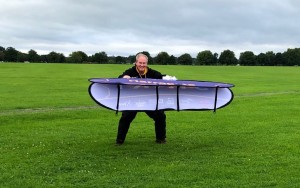 On a blustery morning Harrogate parkrun was a sea of black and gold. We were blessed to have one of our local clubs takeover all of the volunteer roles giving the core team a break. It was a massive turn out for the club with 52 members volunteering and many more running the course to give encouragement to other participants. 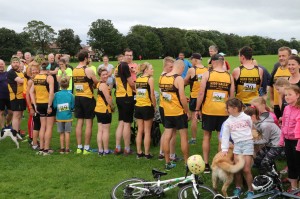 Nidd Valley provided a large number of pacer this weekend which we hope assisted in the 43 personal bests. At the end there was a table of goodies for everyone to enjoy which was well deserved for all those completing the course.

Nidd Valley Road Runner is a friendly club which was formed in 1984 they are affiliated to UK Athletics, the governing body for their sport in the UK. The club’s colours of gold and black were originally taken from those of Harrogate Town FC where the club was based in its early days. The training venue moved to Harrogate Railway AFC in Starbeck in 1991 with a growing membership attracting both experienced runners and first-timers from all around the Harrogate district and beyond. Today their headquarters are close to the town centre at Harrogate Hockey Club. For more details on the club to include training sessions click on this link to visit their website.

Harrogate parkrun saw visitors for near and far with visitors from Portsmouth, Boston Spa, Chapel Allerton, Wetherby, York and Sheffield just to name a few. We had 35 different clubs on the course this week and a massive 57 first timers. 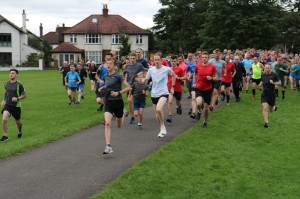 We would like to remind participants that we share the stray with other users and we ask that you greet other users kindly. We do use a road on the stray which is access for home owners to drive down. We ask that this access is respected and not abused. We received a complaint from one of our neighbours that a parkrunner was abusive to a driver using the access road while driving to one of the houses. Please go around any vehicles using this access road as we do not have the right of way.

This week 444 people ran, jogged and walked the course, of whom 57 were first timers and 43 recorded new Personal Bests. Representatives of 35 different clubs took part.

We can’t host an event without volunteers and this week the event was made possible by 53 volunteers from Nidd Valley Road Runners: 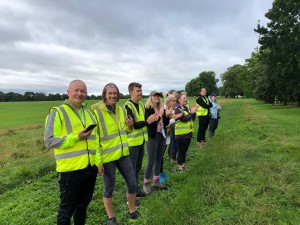 Today's full results and a complete event history can be found on the Harrogate parkrun Results Page.