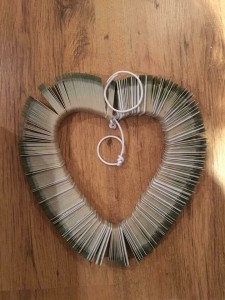 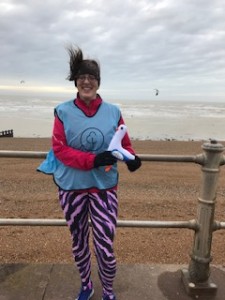 On turning up at the start line, we found a cheery band of volunteers, who were massing and being briefed as to their duties which lifted our spirits as they do each parkrun morning. The parkrun fairies were kind to us today and managed to keep the rain clouds away and although pretty blustery, Storm Dennis was only just waking up! Temperatures too were still chilly and with the storm approaching we were all reluctant to shed our outer layers before running. Now where did I put my gloves?

The runner’s briefing warmly welcomed and introduced all runners to the course layout. What a lovely nearly flat as a pancake course you have too, exploring the coastal promenade through Hastings. This type of course provides lots of opportunities for the faster runners to receive and indeed give encouragement as they whipped past us slower mortals on their return journey's. PB opportunities were perhaps on the scarce side as all of our return journey's were into the headwind especially as you went round the corner by the sculpture poles.

There were a fair few tourists at Hastings today which allowed the perfect opportunity to catch up on where we had been recently and where we were soon off to. Today, tourists from London, Worthing and Havant to name but a few were using Hastings parkrun as their tourist venue.

Arrianne and Duncan our RDs for the day, gave a big thank you to the volunteers who gave up their time to ensure that we were able to run this morning. There were certainly a cheery band of Marshals out around the course, all supporting by giving encouragement and clapping. Don’t forget if you are unable to run, have a race coming up or are just generally a good egg, then volunteering is a great way to give back to the parkrun community. Head over to the Hastings parkrun website for details of the next few weeks roster and sign up for a position that suits you- you get to wear a hi- vis jacket! -what more incentive do you want?

There were a few first timers who are always warmly welcomed and are on the start of their parkrun journey and working towards their first milestones. The trick is when working towards your milestones is #DFYB- Don’t Forget Your Barcode! 15 of you were listed as unknown runners this morning. That’s one run less to count towards those coveted milestone tees. Were you celebrating a special milestone this week? Just like Lena King Who was running her 200th event at Hastings this morning, meaning she is the first female to do so. That’s the great thing about parkrun isn’t it, that each person has their own individual journey to talk about. Especially pertinent though to also remember to hand in your finish token, parkrun needs them for next week as they unfortunately are not a souvenir, medal or indeed your own version of Bingo!

There were a fair few people going back to the nearby Bo Peep pub for the apres parkrun, with refreshing drink options with a chance to purchase hot and cold food options to go with them, which allowed perfect opportunity to catch up on how all of our runs had gone and what we thought of the course.

Thank you again Hastings parkrun for perfectly starting our weekend off. Look forward to seeing you all again soon.

A cool and near windless morning on Hastings seafront made for perfect PB conditions and the runners didn't disappoint with no fewer than 43 of the 156 finishers clocking their best time. Among them was Nadia Winborn who used her first anniversary parkrun to achieve her umpteenth PB. Over the last twelve months she has shed not only more than 15 minutes from her parkrun time but also more than 5 stones in weight. Well done, Nadia, here's looking at 25 minutes.

Another 28 runners made their first appearance at Hastings. With just 2 of those being new to parkrun, it looks like Hastings is becoming well established on the tourist map.
Four runners managed age grading in excess of 80%. Nice to see that the actual ages of these runners ranged from under 10 to over 70.
A big thank you to all today's volunteers, without whom there would have been no parkrun this morning. It was great to see several first time volunteers out today, all did a great job and had the opportunity to enjoy parkrun from a different perspective. We need volunteers for the coming weeks, starting next Saturday, so don't be shy about contacting hastingshelpers@parkrun.com to offer your services. And remember, the 26 November parkrun is non club runner volunteers only - the event will be cancelled unless we get sufficient volunteers who are not members of a running club.
Many congrats also to regular volunteer Erica Wilson, who achieved a long time ambition today by finalling breaking the 30mins barrier in her 30th parkrun - well done Erica!

This week there were 156 runners, of whom 28 were first timers and 43 recorded new Personal Bests. Representatives of 11 different athletics clubs took part.

Hastings parkrun started on 18th April 2015, and since then 2,667 different runners, including participants from 276 athletics clubs, have completed 11,680 runs covering a total distance of 58,400 km, and there have been 2,727 new Personal Bests.

Today's full results and a complete event history can be found on the Hastings parkrun Results Page.