The time has come to say goodbye. In many ways we had an event that echoed features from our inaugural event in 2015. In the lead up to that event we had concerns over attendance & parking, only for Elgin’s car park to be made available on the Friday. Fast forward 30 months & we faced the same scenario. September showers had put the forest into a condition that you’d normally associate with late autumn.

This meant a route change to preserve the rides, dusting off the notes for our original winter route for one last outing. The rain also meant that Elgin’s wasn’t looking great on the Saturday, let alone how it might have looked after the Hatfield Half utilised it on the Sunday. We anticipated the car park to be closed, with all of our comms being to ask people not local to the event to stay away & allow the local community to say goodbye. The NT had advertised the car park as closed earlier in the week, so it was a relief when on Friday afternoon they advised it would be available, subject to conditions. The added room would give us the ability to not have to turn cars away.

As for the run itself? A fitting finale for the forest, with the lake view finish always a treat for both runners & spectators. No one perished on the bridge of doom, meaning in our absence it should probably be renamed the bridge of statistically improbable doom.

We had an extraordinary attendance, largely down to an appreciably high number of very experienced parkrunners appearing to move into the Herts / Essex border area in the past week. The volunteer team handled the increase superbly, everyone paid attention & worked with me as I changed the finish area to accommodate the numbers. There were also lots of willing pairs of hands after the run, offering to help with scanning queues, paperwork to hand should we need to manually record results & close down where needed, allowing for an event that ran like clockwork (save for the slightly delayed start).

As runners made their way through the finish in quantities never seen at the forest before, our primary concern was whether we would exceed the 448 limit on our finish tokens, or the 495 that our stopwatches can cope with. Georgia & Callum were cycling finish tokens feverishly, three funnel managers keeping order in our extra long finish area, they’d be no shenanigans on their watch.

424 runners enjoyed the forest for one last time, 135 personal bests were recorded, not bad for a route that includes the kilometre of doom.

We saw the course record come under serious threat as Afewerk Rossom pushed his way along the dam and towards the finish line. Our timekeepers felt it was sub 16 minutes, but on upload I saw the first result as rounded up to 16:01. Peter had mentioned that he wasn’t sure he captured the time precisely, so for the first time in my 32 occasions Run Directing at the forest, I thought it was worth a second look. Rounded up, Afewerk recorded a time of 15:59, just one second shy of equalling the course record.

In second place Crispian Bloomfield of Billericay soon followed, a time of 16:05, with Nathan Martin completing the top three with 17:23.

Sophie Martin of Wharfdale led home the ladies with 19:31, Fiona Tideswell a minute behind in 20:31. Our very own Lizzie Bellinger was the third female to finish, celebrating both her birthday & her 50th parkrun with 20:39, narrowly missing a PB that would have made it a hattrick.

Of the 57 first timers to Hatfield Forest, 17 were enjoying parkrun for the first time, welcome to your new Saturday morning hobby, we look forward to seeing you back in the future.

Another record set here, we had 60 volunteers on duty to help deliver the parkrun on Saturday. Given our volunteer records are usually set on pacer days, this is an incredible number. We had 14 people assigned to setup alone as our runners wanted to see the forest early on & help before running. Included in that number were three funnel managers, more than we ever normally need as the increase in numbers led to a slightly longer funnel than we would usually deploy.

Without volunteers, parkrun simply wouldn’t happen on a weekly basis. We’ll have a slightly different roster as we move to Castle Park, some roles will disappear, with more emphasis placed on vital non-running positions such as marshalling, timekeeping & finish tokens, which yesterday proved to be very much a 2-person role.

As the event settles into new surroundings, I and the core team will regularly assess if we need to introduce more roles into the finish area, whether pacing events should be more regular, whether more than one tailwalker is appropriate. Please bear with us if you request a specific volunteering position & are asked to perform another task. The Run Director for the week has to ensure they have certain positions covered & this might mean we need to use you elsewhere.

Special thanks to the final set of Hatfield Forest parkrun volunteers:

Firstly, thank you to the National Trust for allowing us to call Hatfield Forest our home for the past 30 months. Without their support this event wouldn’t exist, let alone be in a position where the event has been successful to the point of necessitating a move.

We have our original benefactors to thank for bringing parkrun to Uttlesford in the first place; 1life, Active Essex, Bishop’s Stortford Running Club, Stansted Airport, Uttlesford District Council & of course the Run for the Run competitors who joined us for a lap of the forest in the days preceding parkrun.

To the core team members that have moved on over our time at the forest: Jim, Katrina, Sam, Paul, Simon, Amy, Andrea and Karl.

To Louise Smith, our Hertfordshire parkrun Ambassador. Louise first heard of our plight at the parkrun Ambassador conference earlier in the summer, when our future was looking more like a closure & the loss of a parkrun in the locality, rather than a relocation. Her energy and enthusiasm, combined with an extensive contact book for those in the know within Hertfordshire reinvigorated our efforts & helped us in successfully planning the move to Castle Park

And finally, to the current core team. Since the start of the year the team have researched various options & locations, given their time to prospective route walks & runs and generally been a sounding point for ideas. When the decision was made that would mean we needed to relocate, there was of course sadness, anger, frustration, a manner of emotions, but as a team, we doubled down, working together to find the right solution for parkrun. In order to ensure that the event wasn’t thrown into a perpetual state of confusion & uncertainty, we worked behind the scenes until it was appropriate to announce.

The change of location also means that we are likely to lose members of the core team, as logistically, the distance to the new venue will make their commitments untenable. To carry on working for the collective good of the event speaks volumes for the special group of people that make up the Hatfield Forest parkrun core team.

Without this sense of togetherness & team unity, the event would not be in a position to move on successfully, thanks to the efforts of David, Susan, Rachael, Jason, Georgia, Mark, Steve, Ellen, Darren, Michelle, Christopher, Luke, Francesca, Oliver & Grace the whole situation has been manageable & an effort that has made us stronger as a team. And as a personal thank you, your trust & faith in me throughout the process has made my job as Event Director easier. Knowing that 15 people have your back & want to work with you made the whole process more manageable!

Whilst there is understandable excitement for the inaugural event on Saturday, we as a parkrun local community, and as a wider parkrun community need to act sensibly to ensure that the event arrives in Bishop’s Stortford.

Please allow us a soft start in Bishop’s Stortford. The collection of parks that we will be using are a popular collection of land within a busy market town, it will take time for parkrun to become part of the weekly routine for the town. As the Event Director, to see large numbers descend on Bishop’s Stortford next week for what is technically an inaugural event would be detrimental to the longevity of the event. parkrun is about organic growth, not overwhelming a new venue.

I ask that tourists stay away from event #1 & event #2 (we are due for a route amendment on that week due to the funfair being in town). I would also ask that local parkrunners consider tourism options for the first couple of weeks. We’re not going anywhere anytime soon, enjoy some of the great venues local to us (Great Notley, Harlow, Westmill, Barclay, Stevenage, Brentwood (reverse course on the 30th), Chelmsford, Wimpole). To see over 400 runners on Saturday would be of a concern to me as an Event Director.

We look forward to parkrunners enjoying the new location, please don’t overwhelm the new venue on the first week though. Let us settle in, iron out the creases that will invariably arise from introducing parkrun to the venue (whilst we’ve held a pilot event already, a full parkrun will highlight issues created by volume of runners), then look to enjoy the event as 2017 comes to an end.

Apricot t-shirts remain on sale for Hatfield Forest and likewise are available for Castle Park.

And so, 131 events, 4,511 participants, 25,731 parkruns completed, 128,655km ran, 616 volunteers, 4,395 separate volunteer occasions later, it is time to hand the keys to the forest back to the National Trust and say farewell to Hatfield Forest. A home that has been good to us over the years.

I have experienced a plethora of emotions since the decision was made to relocate the event. The venue means a lot to me from a personal perspective, as well as what it means for parkrun, but for me the timing is right for us to move on. From the early days of parkrun at the forest, we had considered the what if scenario of our attendance growing. Over the 2016/17 winter season, anyone who attended the event could see that we had an unsustainable issue with car parking. For example, the second birthday of the event was a low key event due to the 70% increase in attendance we saw the year prior.

There might be sadness at losing the forest, but I have no doubt that this is the right decision for the future of running in our local area. parkrun will continue to thrive from our new home. Thank you to everyone you had paid a visit to Hatfield Forest over the past 131 events & being a part of the first chapter in our history. 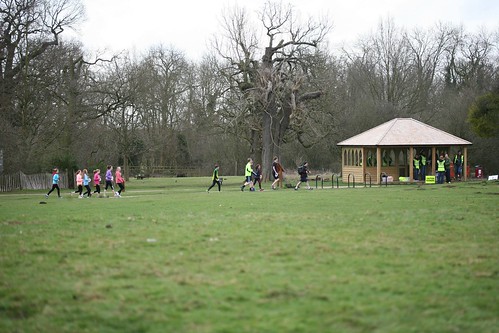