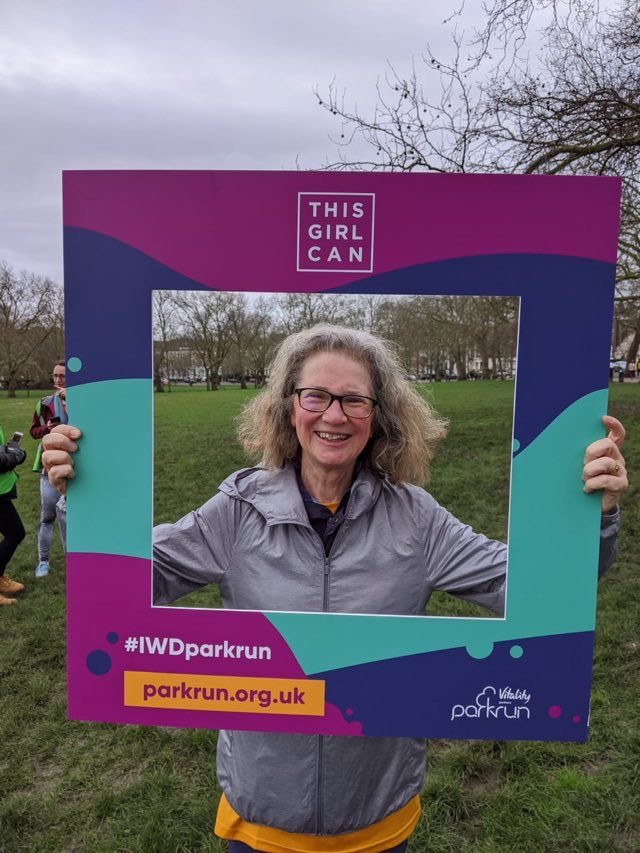 This week our featured parkrunner is Ursula Yates. She is one of the many parkrunners at Highbury Fields who encompasses all that we celebrated on International Women’s Day in association with This Girl Can.

Ursula started parkrun in early 2016. She says “I had done minimal sport for years. After finding myself breathless when running for a bus, a friend told me she went to parkrun in Maidstone. So I googled parkrun and discovered there was one in Highbury Fields. I had no further excuse!”

Besides parkrun, Ursula doesn’t run but does a lot of walking with her Springer Spaniel, Rusty.

Ursula has completed 160 parkruns over the past 4 years, 156 of those have been at the Fields. The other 4 were at North Beach, Durban, South Africa, which regularly gets over 1000 runners (their record is 2527!) Ursula says that despite the 8am start “to avoid the heat”, it is still an incredibly hot run but great fun!

Her most memorable parkrun? Her 100th, because family and friends came along to cheer, support and celebrate the milestone with her.
The hardest? The first. “I was so unfit. In fact I only managed 4 laps. I thought I was last and felt exhausted.”
But what she felt afterwards, the runner’s high, is what brought her back. “What I love most about parkrun is that I feel great afterwards, and I’ve met the nicest people”

Ursula has volunteered regularly over the years, trying to volunteer once for every 10 runs. She’s done a variety of roles and found them all to be fun.

When I asked Ursula if there was anything else she’d like to add, she simply said “Thank you to Paul Sinton-Hewitt, for starting parkrun”