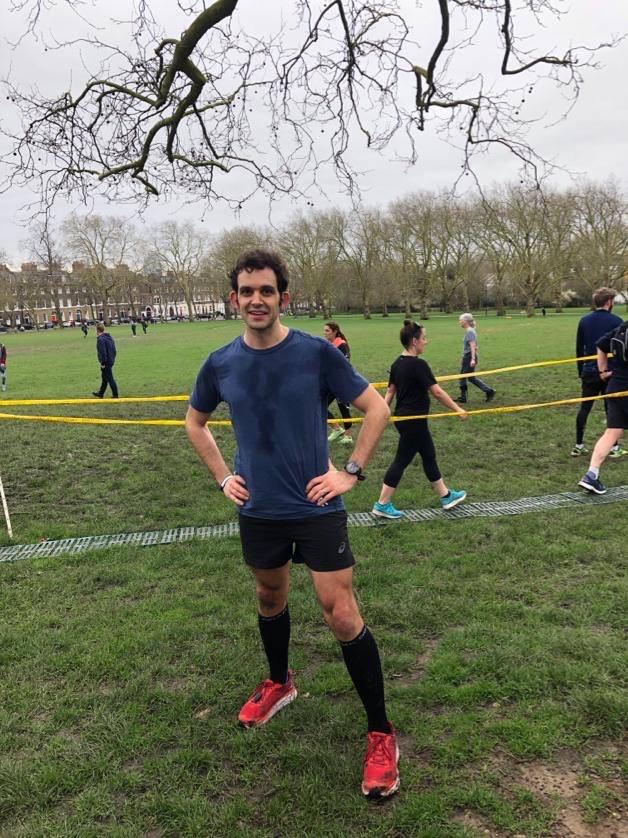 Plant based runner Alex’s first parkrun was back in 2016 – on his birthday! Unsure of how many people would show up at 9am on a Saturday morning at Highbury Fields, he ran with a field of over 170. Since then he has completed 85 parkruns across five locations, including as far away as Warrnambool and Melbourne in Australia making new running connections along the way.

Diagnosed with Multiple Sclerosis in 2013, exercise, specifically running, has become an important part of his recovery and the regular parkrun meet-ups have created new communities and support networks which have become a big part of his life.

Highbury Fields remains a special place for Alex, it is where he proposed to his wife, Leah. At parkrun, Alex is often cheered on by their two children; daughter Marissa, recently completed her Junior parkrun debut and owes her fledgling running prowess to the consumption of runner beans.

On paper, his most memorable parkrun came in 2017 when he broke 20 mins as part of his training for running in the Athens Marathon. However, it is his most recent parkrun that has evoked a greater joy… running late for the start line at Finsbury Park and in two minds on whether to turn home and postpone his run for a later day, he decided to persevere – one of his 2020 goals include his 100 parkrun milestone so every run counts! Starting after the run had officially started let him witness first-hand the magic of parkrun. In progressing through the field, he saw people of all abilities running their own races, each with their individual reason for showing up to run or walk outdoors, getting their exercise fix at an event made possible only through the commitment and selflessness of volunteers.

Sadly, but understandably, Alex will have to wait before reaching his 100 parkrun milestone given the spread of Covid-19 meaning all events have been put on hold until further notice.

With social distancing being actively encouraged, we are now faced with navigating the next few months away from the communities and activities that we love…and the motivation that can keep us going! So now more than ever, we need to be thinking about how we can stay healthy, fit and motivated under our own steam!

Alex has been proactively keeping up with running and recommends “company” in the guise of an audio book, podcasts or music. If you’re walking, jogging or running solo, try plugging into a book for a few chapters as you exercise, or opt for a podcast. Fill your brain with stories, knowledge and inspiration with each mile.

The important thing is to stay accountable to yourself. Seek out virtual running groups and communities in places like Strava and share your progress. Cheerlead other participants. Keep the momentum going. Whatever you do, just keep showing up, if only for yourself.