My family and I have enjoyed many runs at Hogmoor Inclosure parkrun during 2019 and several members started their parkrun adventure here in the summer of 2019 so we thought it would be a nice idea to say thank you to the regular volunteers by doing a family volunteer takeover for the week. We filled the entire roster with the exception of Run Director (as we felt we needed at least one person to be properly in charge). There was also an additional volunteer photographer.

Friend of the family - Photographer

For some of the newer runners in the family this was their first time volunteering and they all agreed that it had been great fun and that it was really interesting to see parkrun from ‘the other side’. As it was so close to Christmas we all wore team elf hats and it was great to see that a large number of runners had also made a great festive effort, with sparkles, fishnets, Santa hats, Christmas trees and other looser interpretations of Christmas all visible.

The first runner back David Jarrett, in a time of 19.01 was dressed in a furry reindeer costume!

The first female finisher was Harriet Bond in 23.45.

A big well done to all the runners for actually tuning up on such an unpromising, rainy morning and for going through the HUGE puddle at the far end of the course, everyone got wet ! To be fair the rain did ease off for the run itself and we were blessed by a spectacular rainbow over the finish line at the end.

A huge thank you to ALL the volunteers at Hogmoor Inclosure parkrun during 2019 and if you fancy having a go yourself do get in touch via hogmmorinclosurehelpers@parkrun.com. If you can’t bear the thought of giving up your run to volunteer there are several roles where you can do both. Go on, volunteer…you know you want to….

A very happy Christmas everybody. 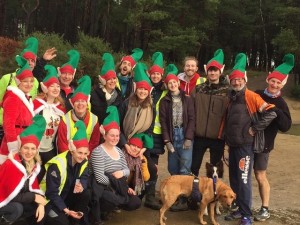