This week it was our 5th birthday here at Homewood as 99 people ran, jogged and walked the rather wet course, of whom 17 were first timers and 9 recorded new Personal Bests. Representatives of 28 different clubs took part including Dublin Bay Running Club and DofE.

Thanks to everyone who wore fancy dress to celebrate our birthday, the first time briefing from a banana was a first for us.

Congratulations to Vicki HOLMES and Helen ROBERTS, both joining the 50 Run club today, along with Jon Lyons joining the new 25 run club. Well done also to Leo Skerton, who joined the junior 10 club, and also clocked up a new PB in the J11-14 group!

The event was made possible by 20 super  volunteers led by this week's Run Director, Dee HARPER:

First across the line this week was Dan TOWNEND with a new PB of 19:48 an first female Laura HALES of Windle Valley Runners on 25:54. Well done to everyone who got round the course today.

This week was a bit  foggy as 74 people ran, jogged and walked the course, of whom 14 were first timers and 8 recorded new Personal Bests. Representatives of 16 different clubs took part including Elmbridge RRC and Hook Norton Harriers.

The event was made possible by 20 wonderful volunteers led by this weeks Run Director Kathy Miller:

Well done to everyone who made it round today including Marcin SMOLAK who was first across the line on 20:15 and Mandy RUKS of Walton AC, first female again 24:48? 6 seconds quicker than last week.

Congratulations to Mark BRACE who didn't know it at the time, but became the 5,000th different person to finish here at Homewood, fantastic, thanks to the other 4,999 finishers before him, and welcome to all the new walkers and runners who came along  on Saturday and those who will join us in the weeks and years to come. 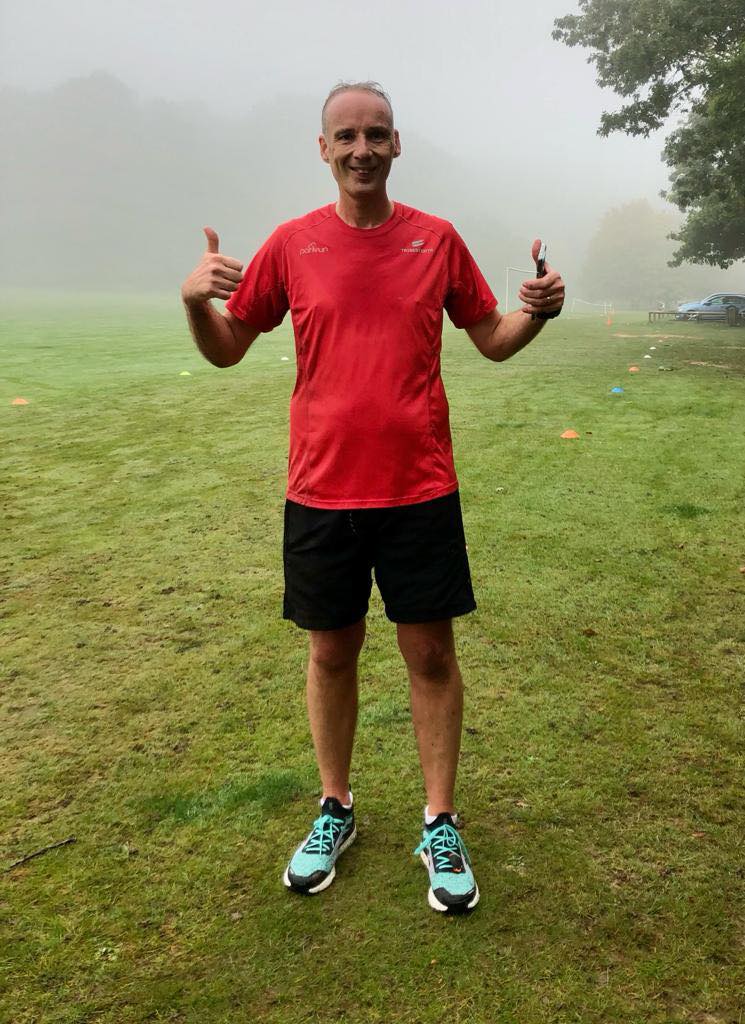 I managed to finally get to my  250th parkrun this week, thanks to everyone who helped me celebrate, looking forward to getting my green top now! I also ordered a volunteer top, if you have qualified for 25, 50, 100 or 250 run or volunteers, then check out your parkrun profile for details of how to order one too.

It's our 5th birthday here at Homewood next week, you are invited to run in fancy dress or bring some cake, fruit or some treats along to celebrate.

This week was cool and grey with some rain right at the end as 68 people ran, jogged and walked the course, of whom 12 were first timers and 8 recorded new Personal Bests. Representatives of 15 different clubs took part including Lonely Goat RC and Chineham Park Running Club.

Congratulations to Philip Wragg who joined the 50 club on a nice time of 31:49.

It was the 17th anniversary of parkrun starting at Bushy park back in 2004, it has of course grown from a handful of runners to a global event, happy birthday and thanks to all the runners, walkers and volunteers who have made it such a success.

The event was made possible by 19 lovely volunteers:

First across the line this week was William Hartley on 19:53 and first female was Mandy Ruks of Walton AC on 24:54, well done to everyone that came along and took the hills and trails. 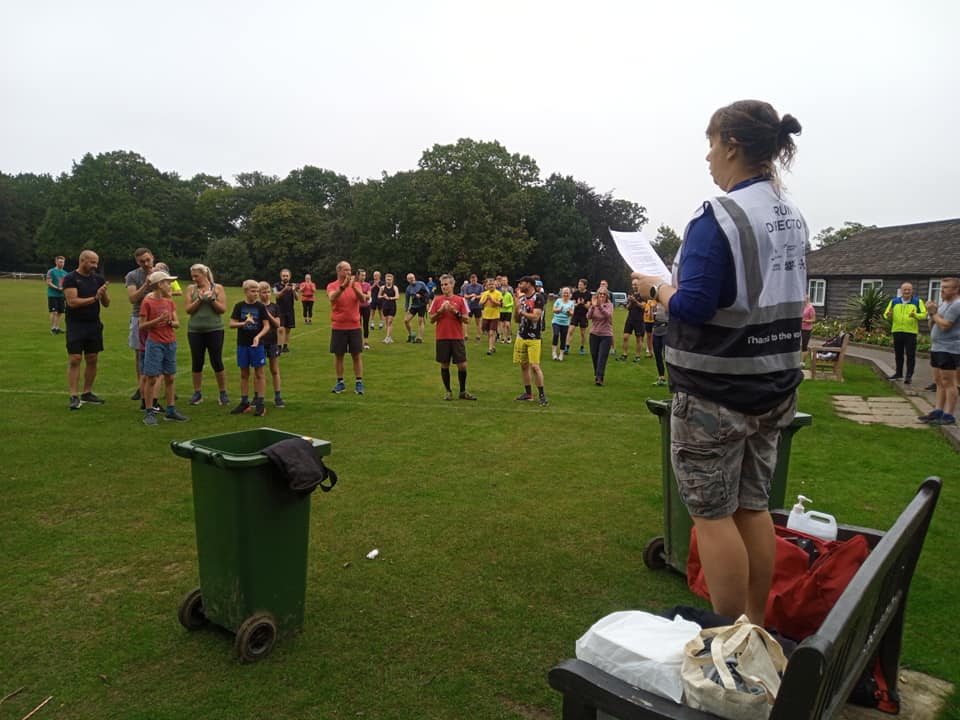 What's the very best thing about a Homewood parkrun? Is it the challenge of the course?, the feeling of accomplishment at the end? the atmosphere of community? the fresh air and beauty of the woods? Or maybe it's simply the joy of the actual run or walk itself? Well, apparently for most people it's none of these things. It seems that the answer is pretty much universal. 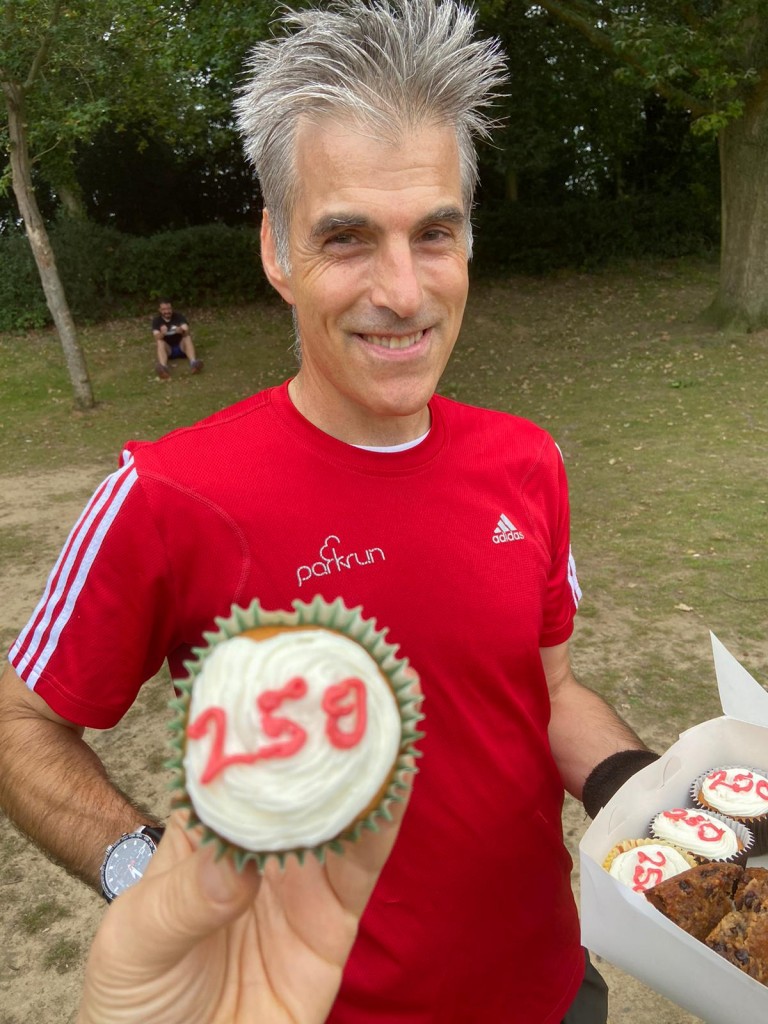 Now I am aware that some of you will disagree and that this is a controversial view in some quarters. Particularly for those in the Battenburg Camp. However, whatever the type, cake seems to be the primary draw for most people judging by how quickly it disappears if someone brings some along. This week it was Homewood stalwart (and occasional Run Director), Roland Hogg who stepped up with the plate to celebrate his 250th run and our grateful thanks and congratulations go to him. 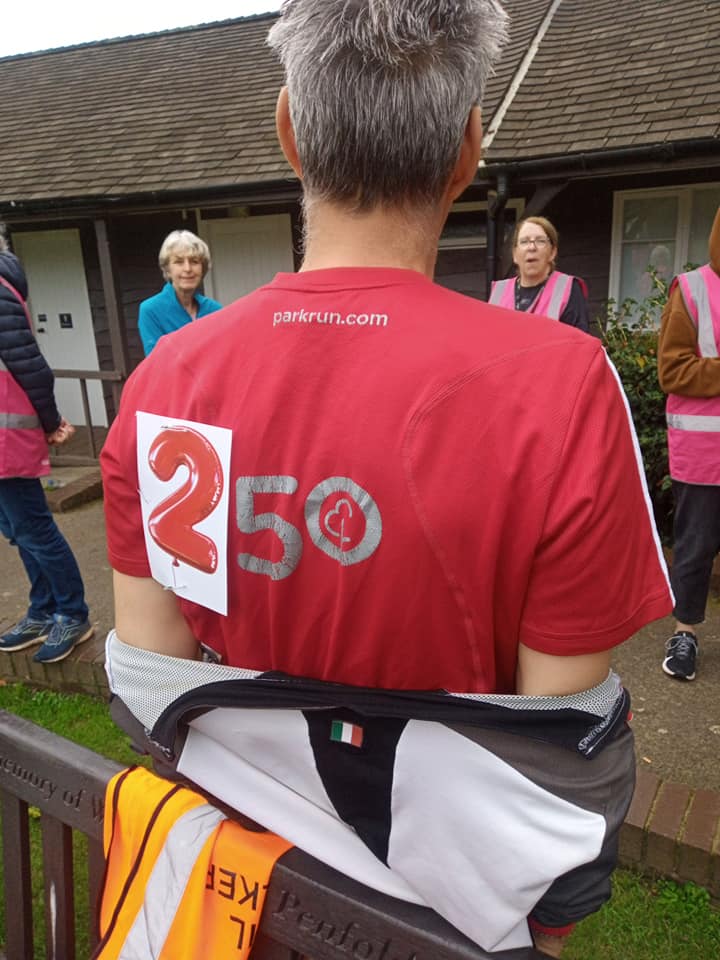 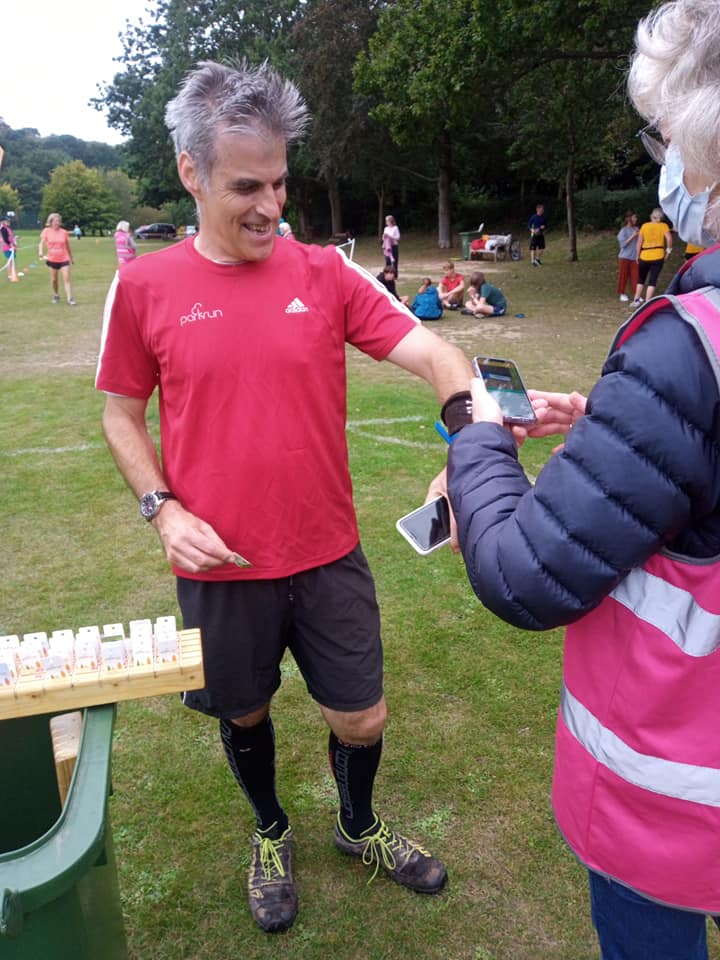 Roland's was not the only impressive performance this week though. First across the line was Lloyd Cross in a speedy 19.35 closely followed by Angelo Bella in 19.42. Both were running at Homewood for the first time and we hope to see them again. The next five runners all achieved PB's led by third-place Elizabeth Leason who, on only her fourth Homewood run is closing in on the record for the fastest female finisher at the course. Elizabeth also scored the highest Age Grade score this week with 75.06. Grant Russell, who finished 5th had the best Age Grade score amongst the men with 67.98. 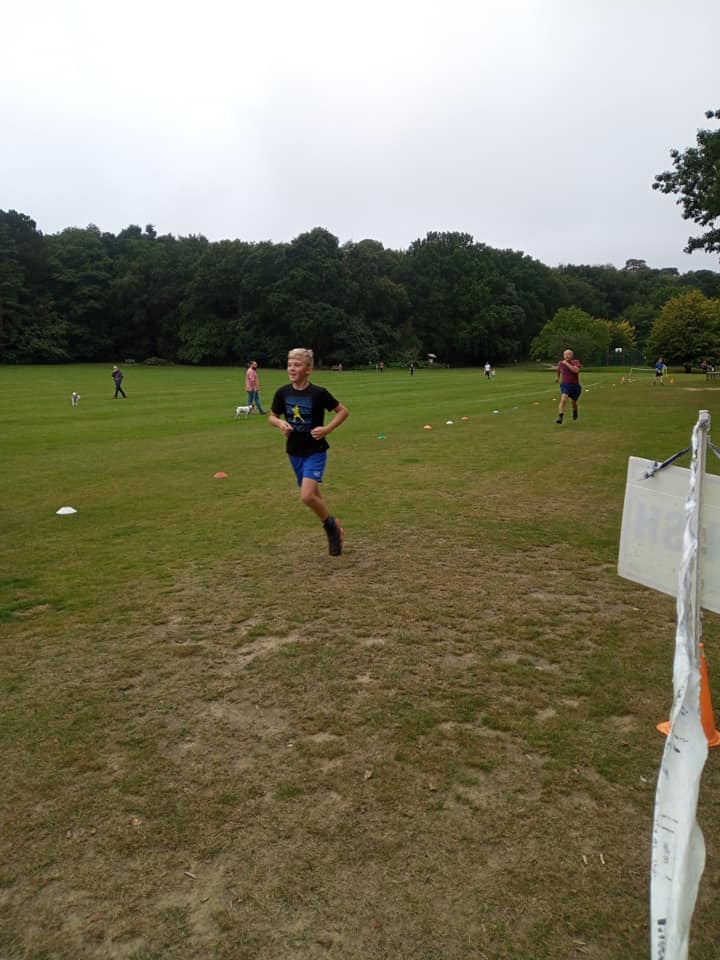 In all we had 101 runners completing the route, 23 for the first time and two, Jane Lovatt and David Gower, running their very first parkrun. It was good to see so many tourists (particularly with the petrol shortages yesterday!) and we hope you will return to us soon. 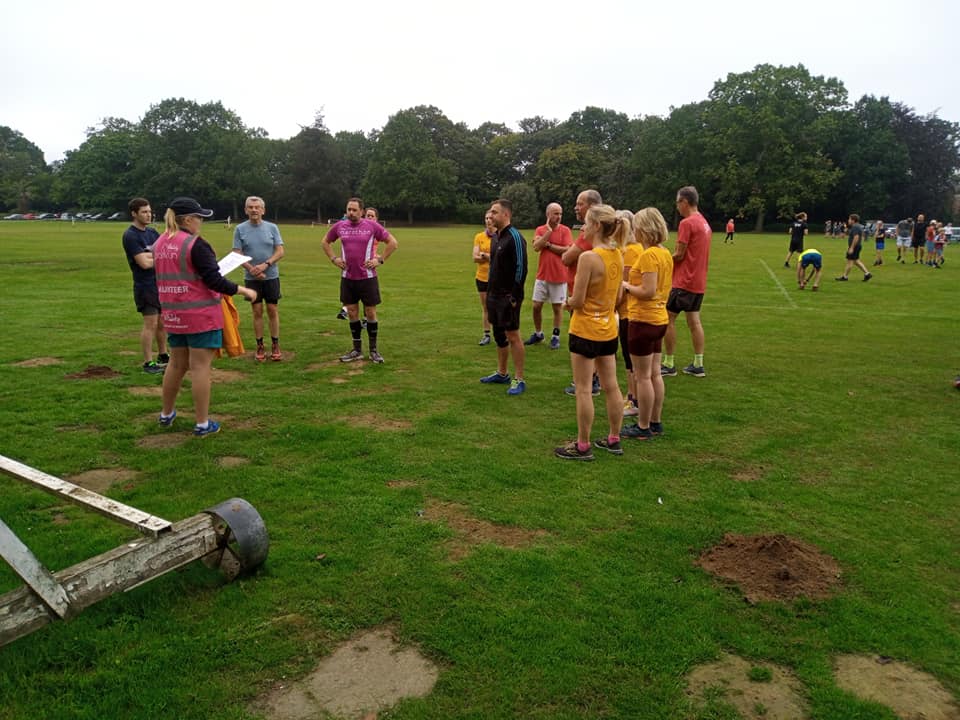 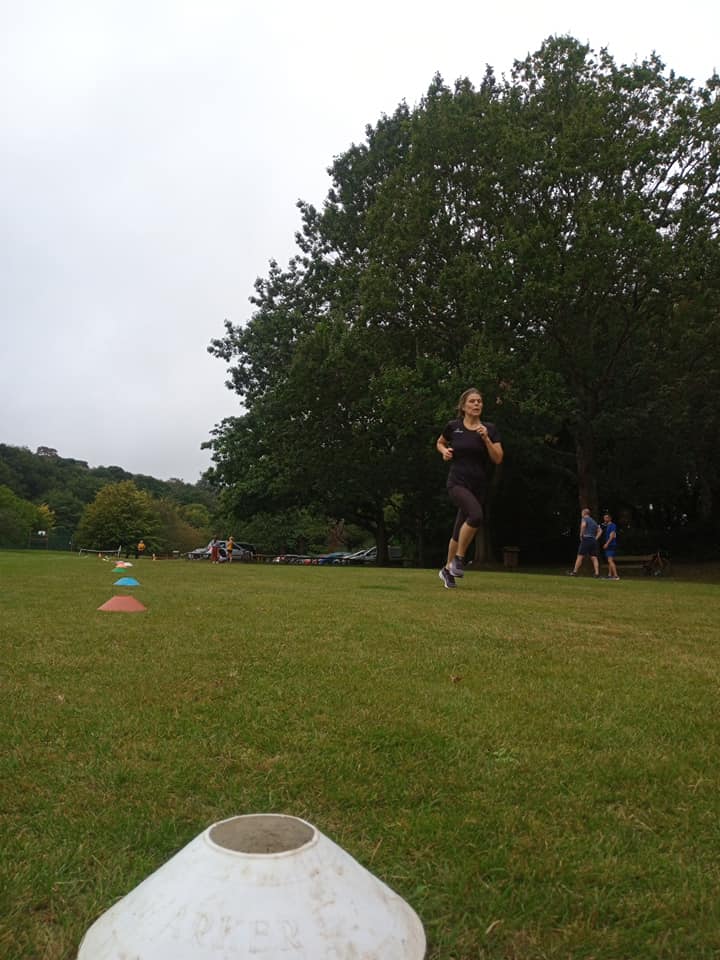 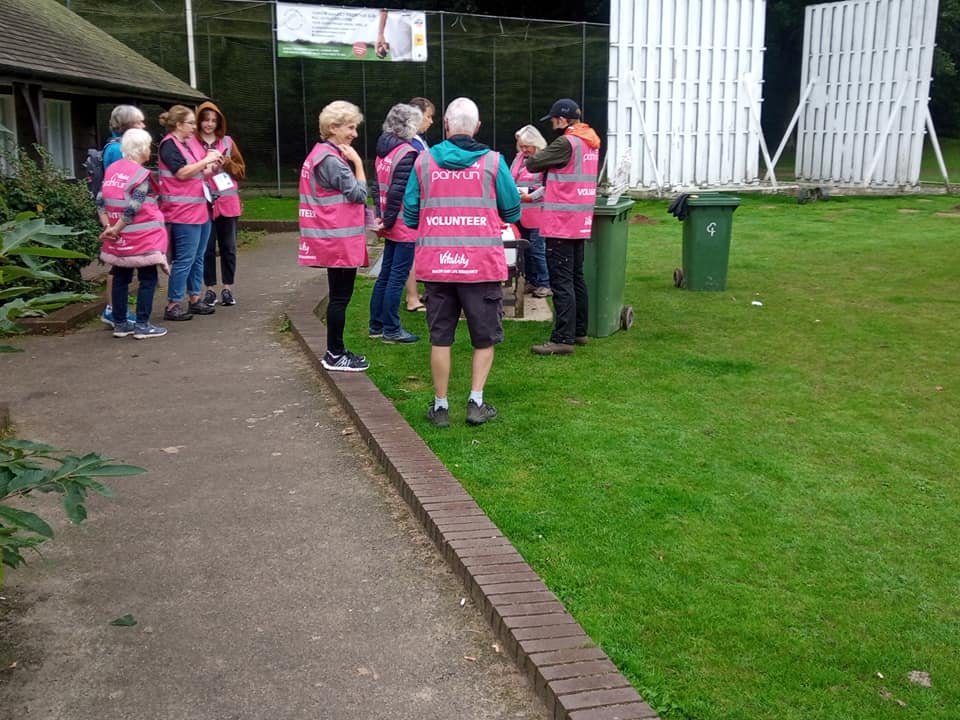 Thank you to all of you. And if you haven't yet done a stint on the volunteer's roster please do consider it. Our run cannot take part without these wonderful folk and many roles also allow you to run as well so really there is no excuse!

Meanwhile, I wish you all a good week and hope to see you at Homewood next week.

This week we had perfect conditions as 120 people ran, jogged and walked the course, of whom 33 were first timers and 19 recorded new Personal Bests. Representatives of 27 different clubs took part including Bellgrave Harriers and No Sweat Running Community.

The event was made possible by 19 lovely volunteers led by this week's Run Director Kathy MILLER:

We were joined this week by Richmond based Ful-On Tri, being undecided whether to going cycling or running on a Saturday morning they have combined the two, cycling to different parkruns, they are now working out how they can add the swimming to complete the experience.

Well done to Louis SUGGETT of Trailendenders on his first time here at Homewood, crossing the line in 18:44, and to Elizabeth LEASON of Carnethy Hill RC first female with a new PB of 19:48.