On an fresh early spring morning the icy breeze was quickly melted by a mass of people coming together to celebrate parkrun and International Women's Day  #IWDparkrun a plethora of purple runners, joggers and walkers alike, all with smiles from ear to ear eager to fill their lungs with fresh air and a 5K constitutional. A band of trusty volunteers welcomed the gathering throng of locals with a fair number of first time parkrunners and a few tourists from as far afield as Colchester, Essex.

A big shout out to Matt Pratt first man, Jo Isbill first women and William Ford for first junior under 10.

Favourable conditions so no less than 81 PB’s.
Congratulations to our milestones: Julian Young (50); Callum Kirk (50); Charlene Gower (50) and her Hoffman  https://parkrun50in50.wordpress.com/hoffman-club-members/ and Beryl Barber on her magnificent 350th run.
The parkrun was capped off by Radio Norfolk interviewing ladies for I.W.D.
Tweet

With this being a leap year and with the 29th February falling on Saturday (it won't happen again until 2048) the Fenland Runners have offered to do a special Volunteer Take-Over and to mark the occasion we will be having a change of route!

We are not going to announce the change until the day itself so something to look forward to and we are asking runners to bring cakes to make it a run to remember.

Of course tradition has it that this is the one occasion on which a woman is allowed to propose to the man of her choice, so ladies make the most of the opportunity and don't let him get away! 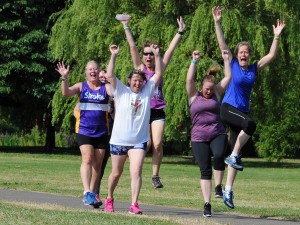 King's Lynn parkrun, along with parkrun nationally, will be celebrating International Women's Day on Saturday 7th March 2020, this also supporting the 'This Girl Can' campaign.

All runners are encouraged to bring along a female friend, family member or work colleague to parkrun for the first time and to wear purple, to show support for the event. We will also have a special IWD 'selfie board' for recording participation.

We would like an all women volunteer team for the day and thank you to the KL Community Runners who have offered up to do a parkrun volunteer 'take-over' on the day with the women members taking up the various volunteer roles..

Runners will also be encouraged to bring along cakes to make it a real party atmosphere.

Once out of the Essex prison, thanks to the stolen security card, I ‘borrow’ a Nissan Note from a side street to drive back to Norfolk, the county where I was born in Haddiscoe, October 1957. My village may have changed, the highways certainly have. Reading poetry books about the Waveney Valley has fostered a love of three-line haiku poems.

I have a long journey to mull things over. The prison parkrun was good training for this Halloween event. The last time I power walked as a free man was at Gorleston Cliffs, my home event. Just thinking about the barcode scanning error fills me with rage, sparking a desire for revenge. They won’t be expecting a funnel ducker!

the toothy grin of a jack-o’-lantern – my face, smile-free

Stopping off, I manage to break into a roadside M&S and steal a Halloween mask, plastic scythe and road map. Back on the tarmac I’m totally lost; ten years is a long time to be away and someone has torn out the page I need. Partially sighted due to the poorly fitting hockey mask, I miss the turning for the A143, and eventually end up on the A47 heading toward King’s Lynn! Nearing town, it’s eerily quiet, except for a menacing piano tune coming from a window above the Carpenters Arms.

old house – ghost of a boy at the window

Pondering how on earth I’ve gone wrong, I decide to complete King’s Lynn parkrun instead. The dawn is here, I won’t be able to make it to Gorleston in time. A field of 285 athletes has assembled, with ghouls and ghosts to celebrate Halloween parkrun style and four first timers. The parkrun has also been swamped with a late season influx of Lynnsport Ladybirds, dotted around the course.

small joys – hiding behind a plane tree I scare a spaniel

After a lively briefing from run director Bridget, whose witch hat is dislodged by a gust, and the presentation of the Fields in Trust ‘Much Loved’ award by Event Director Gary Walker  to Claire Thomsett, The Walks Park Manager, we’re underway at nine sharpish. Despite the Rugby World Cup Final, there are plenty of volunteers today, many dressed as ladybirds or witches, a contrast to my austere boiler suit. I say nothing to any of them. Besides, I’ve not said a word since that Gorleston foul up.

early twinge – just walk like Yul Brynner they all said

I’m lapped by the first finishers, a large number of club runners and good for age athletes. But this doesn’t bother me in the slightest, I have no need to run. In my sights are the newest members of the Junior 10 Club, Frances Ford and Elizabeth Morris-Sampson, and the three runners entering the hallowed 100 Club, Richard Evans, Nick Mackay and Emma Langley.

My 16 victims include a ladybird and witch, the sheer relentlessness of the death march claiming their scalps. No words are exchanged in passing; that would be unprofessional. The game of ‘five the scythe’ is oddly popular on my last lap, Harley Quinn resisting the temptation to whack me with her baseball bat!

the valley of the kings – I take off my mask

In the finish area, otherwise known as the Valley of the Kings, I narrowly miss a sub 40 time. More inconsolable rage! I don the mask once more. The impressive total of 25 pbs does nothing to quell my anger. Overall, 268 athletes beat the bogeyman (40:28).

My psychiatrist arrives and shoots me six times with a nerf gun. I fall backwards onto the grass behind the Valley of the Kings. Stabbing pain in my shins hinders an agonising crawl towards the safety of the stingers.

depression in the wet grass – leaves fill the space

While the run director scans the park, a few Lynnsport volunteers remain with the doctor near the finish funnel in case I return. I watch from a distance, hidden behind the Red Mount. They’ll never find me. I’ll be back next Halloween....

empty park – after the chase the silence.