We are delighted to confirm that once again we will be holding a New Years Day event at Knowsley on the 1st January 2020 with a 10.30 start. #newyear

Once again we will be parkrunning at Knowsley on New years Day. It will be a 10.30 start. We look forward to welcoming you all. Further details will be posted to our social media channels nearer the time.

You wait for a parkrun takeover and then 2 occur within a matter of a couple of weeks of each other! Following on from the success of the recent St. Helens Striders takeover, this weekend's parkrun was brought to you by Runsomnia. 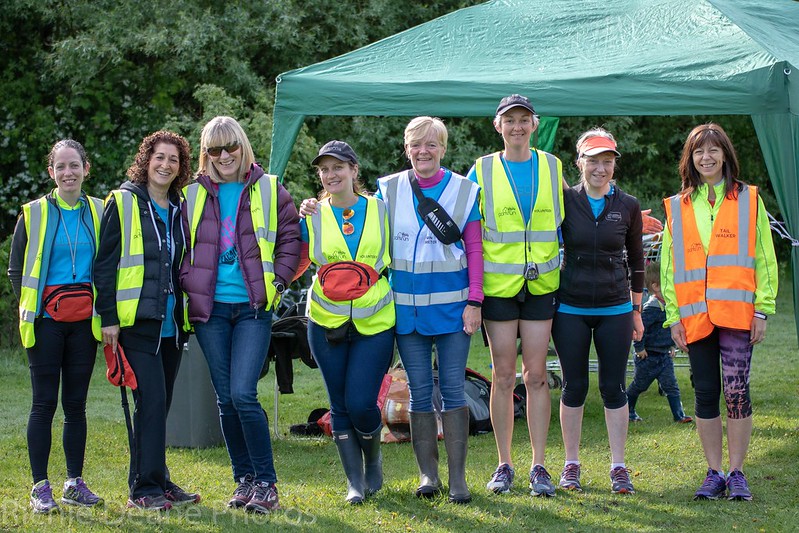 Runsomnia is an early morning running group that was founded in 2015. They meet at the Fiveways in Childwall at 6am most weekday mornings. The group was set up to cater for those runners who struggle to train at more conventional times of the day & is open to all abilities. They normally cover around 5 miles before finishing back at the Fiveways just before 7am. 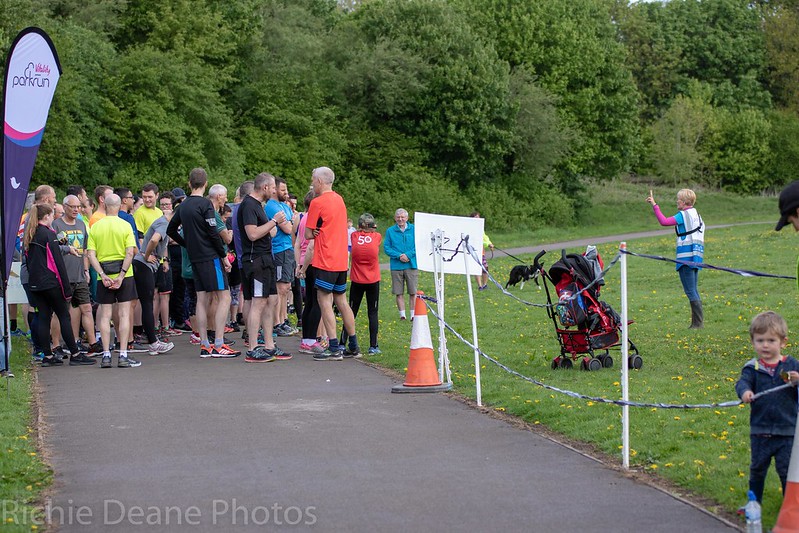 They also complete 'parkrunsomnia' runs where they run the distance from the Fiveways to a local parkrun & back on a Saturday, thereby covering a greater distance which is perfect for those wanting a longer run. There are 3 main parkruns within distance, including Princes, Croxteth Hall & Knowsley. I'm suitably informed that the latter is by far their favourite! 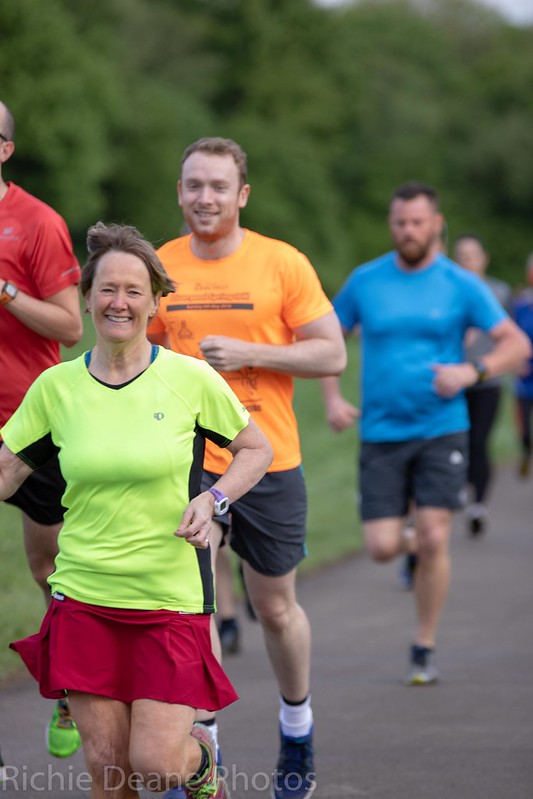 Run director this week was Liz Dennett, who is a regular runner at Knowsley & is normally found attached to a small white Westie dog named Parker. The rest of the volunteer team were made up from Runsomnia runners who were mostly volunteering at Knowsley for the first time, although they are regular runners at Knowsley.

The Runsomnia squad were very generous to our runners this week, as they brought with them refreshments in the form of bottles of water, cup cakes, muffins & variety of tempting nibbles. They proved a perfect breakfast for most runners! 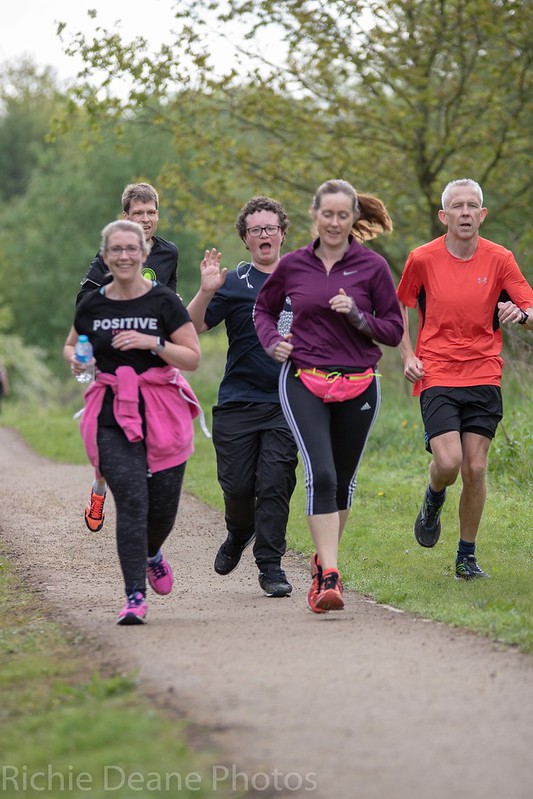 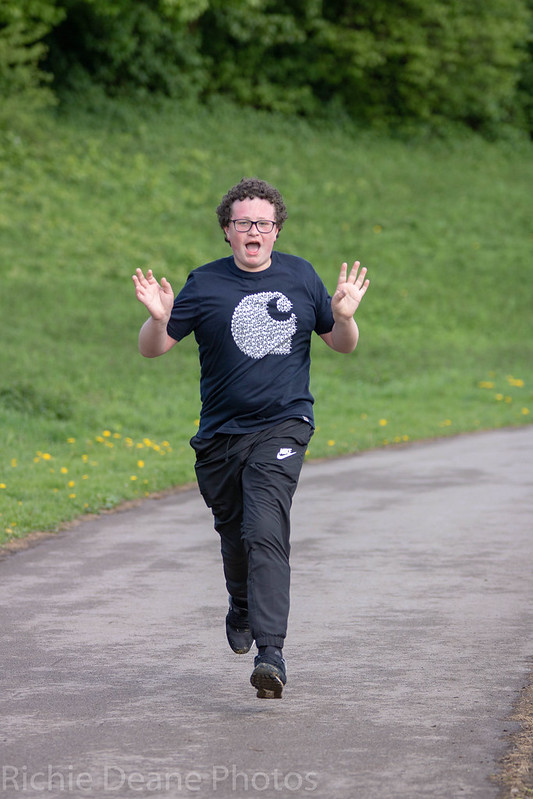 Further up the field though, we had Neil Hennigan, from Penny Lane Striders who was our first finisher this week, crossing the line in a pb time of 18:59 & completing his 39th parkrun in the process. First female finisher this week was Sue Duckworth, visiting us for the first time from Darwen Dashers RC, completing the course in 23:30. 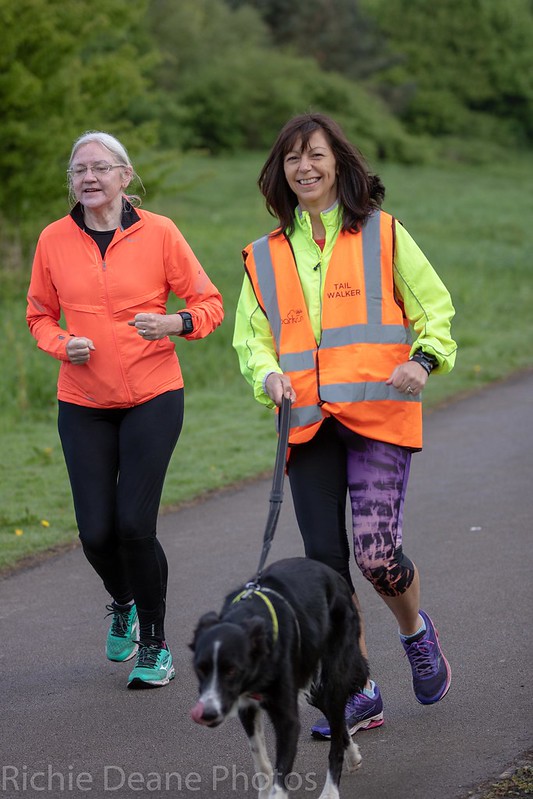 The Runsomnia takeover proved a hit with the runners & volunteers a like and thankfully the weather was on our side for once. If you belong to a running club, charity or organisation and would like to get invloved with a takeover then please get in touch with us at knowsleyhelpers@parkrun.com

This week 87 people ran, jogged and walked the course, of whom 22 were first timers and 20 recorded new Personal Bests. Representatives of 14 different clubs took part.

Today's full results and a complete event history can be found on the Knowsley parkrun Results Page.

Knowsley parkrun started on 10th December 2016. Since then 1,445 participants have completed 4,445 parkruns covering a total distance of 22,225 km, including 947 new Personal Bests.

Having been on 'tour' the last few weeks, firstly down in London spectating the marathon & last week completing the Markeaton parkrun in Derby, it was a pleasant surprise to find out that the weather this week was on our side for once!

It was a busy weekend running wise locally, with both the Halewood 5k & the Spring 5k taking place on Saturday too, so we were aware that some of our core team & regular runners may be disposed elsewhere. We had a total of 43 runners, understandably lower than our usual number, but it was great to hear some positive comments about our parkrun from both our regular runners & those visiting Knowsley for the first time. 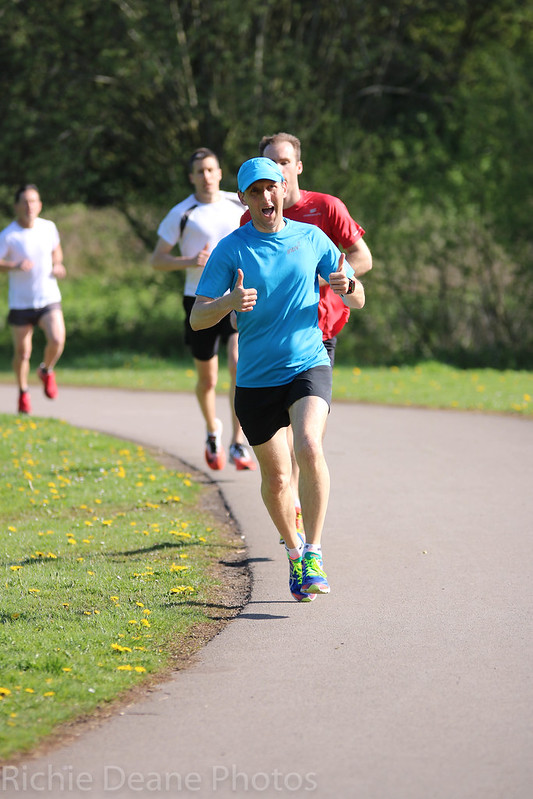 We had a little bit of drama processing the results this week, hence we had to re-issue the results later on during Saturday evening. One of the stopwatches decided that it didn't want to record the first finishers time, perhaps due to the heat, but luckily we got to the bottom of the problem & were pleased to confirm that Tony Pfafp from Warrington RRC crossed the line in 18:34. First lady home this week was Sarah Forster who completed the parkrun with a new PB time of 26:15. 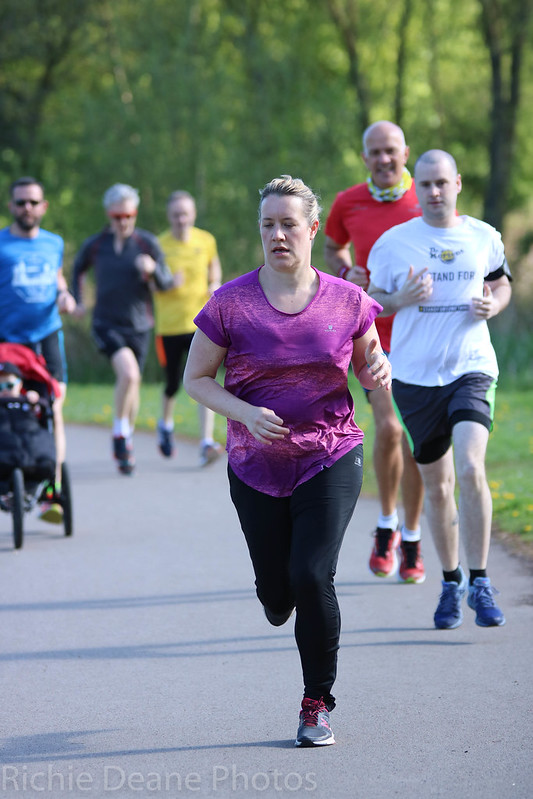 Next week we are lucky to have another parkrun takeover! Next weekend will be hosted by local early morning running group Runsomnia, who will be setting their alarm clocks for Saturday morning slightly later than the usual 5:30am! The usual core volunteering team are therefore welcome to have a well deserved week off or ideally the opportunity to run for a change! 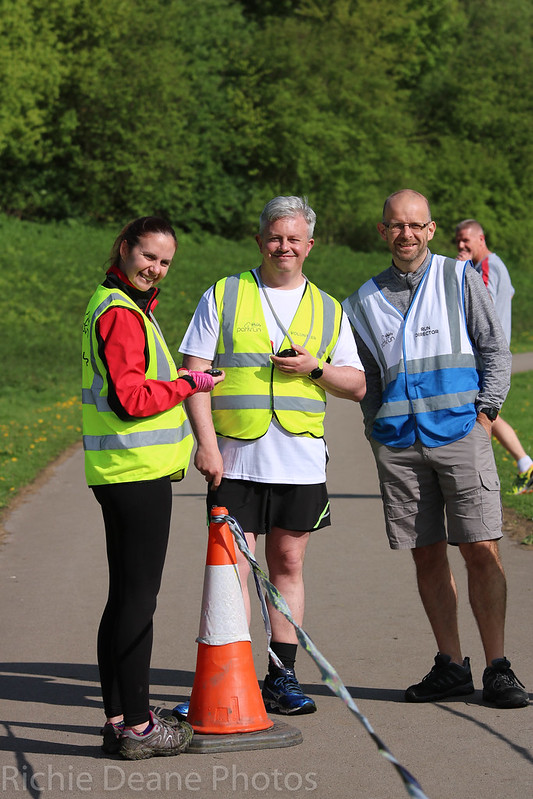 This week 43 people ran, jogged and walked the course, of whom 7 were first timers and 9 recorded new Personal Bests. Representatives of 9 different clubs took part.

Today's full results and a complete event history can be found on the Knowsley parkrun Results Page.

Knowsley parkrun started on 10th December 2016. Since then 1,423 participants have completed 4,358 parkruns covering a total distance of 21,790 km, including 927 new Personal Bests.

This week we have a guest run report written by Barry Shackleton who visited us this week. Thank you Barry! 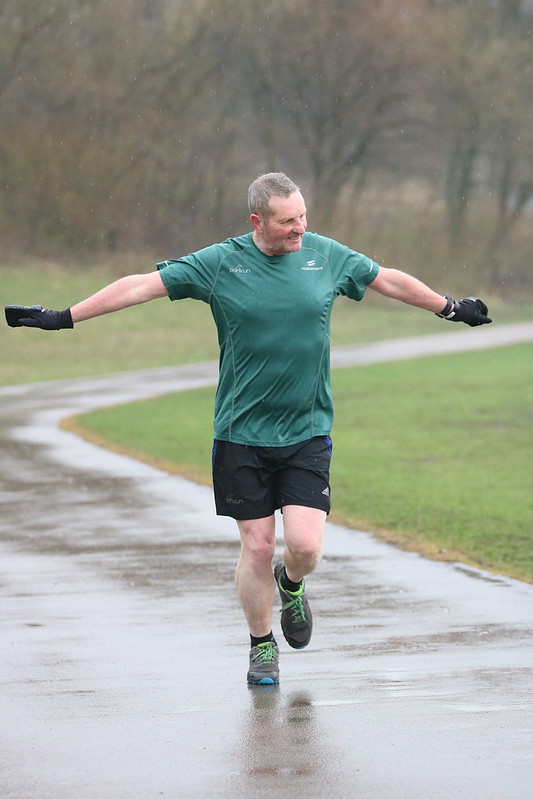 My first visit to Knowsley and my 76th different parkrun venue so thanks to the Run Director Richie for allowing me to write the run report this week. And before we start, here are the other volunteer dream-makers which allowed the run to take place:

It's the first parkrun of April and with the memories of months of Friday night/ Saturday mornings of below zero temperatures it was nice to park up and see 9℃ on the car dashboard, and maybe it was raining a bit ........... so what! Better than freezing. And because of the rain Richie didn't keep the 46 runners waiting around at the start but got through the announcements quickly. So quickly that a couple of stragglers who were jogging up from the bridge didn't quite make it for the actual start, but they both overtook me pretty quickly so no harm done.

So how did we all do? 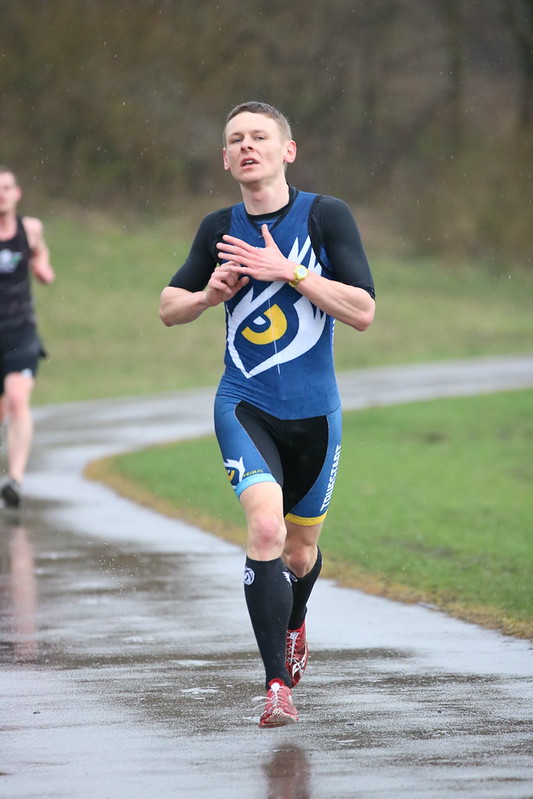 Robert Chesters of St Helens Tri was first across the line in a new Personal Best time of 18:03 which took 5 seconds from the time he set last week. This makes him the 10th fastest runner ever seen at Knowsley. Gary Davies of the McCarkiss Endurance Project was just 15 seconds behind in 18:18 and running at Knowsley for the first time in his 15th parkrun. He is the 15th fastest runner ever seen at Knowsley. Mark Grady finished 3rd and completed the trio of runners who managed to run under 20 minutes. Mark has run 6 times at Knowsley and has finished in the top 3 places each time.

First Lady home was Danielle McEwan in 24:19 which earned her 13th place overall. It was also a Personal Best time for her taking 10 seconds from her time of last week. Danielle has run 9 parkruns, all of which have been at Knowsley, and she has broken her PB on 6 occasions.

There were no new CATEGORY RECORDS.

21 runners were ladies and 25 were men, and included in those numbers there were 4 juniors. Don't forget that while we love the youngsters running with us, if the junior is under the age of 11 they MUST be accompanied at all times during the run by an adult, which doesn't have to be a parent, but should ideally be someone they know.

There were 18 First Timers who joined the parkrun party and among them were four who were running their very first parkrun. These four are worthy of a mention for starting their parkrun journey with us so well done to Caroline Maynard, Carly McAuley, Jonathan Roscoe and Michael Meyler. Welcome to the parkrun family. Now you have done that first run why not have another go next week and set a new Personal Best time?

Well done to all 46 runners who managed to remember their barcode. It is very rare to see a set of parkrun results without at least one unknown runner. It's terrible to have a brilliant run, maybe get a Personal Best, and then fail to have it recognised because you have no barcode. PLEASE .... Don't Forget Your Barcode. Need a new barcode? Or would you like your result as a text? Follow the link to your profile from your latest results email.

And remember please don't take home the finish tokens. They are not souveniers ........ DON'T BE A TOKEN MAGPIE.

Eileen Morland ran her 50th parkrun and gets herself a Cardinal Red commemorative 50-run T-shirt. Eileen has run 48 of her parkruns at Knowsley with her two tours being to Albert parkrun in Melbourne in February, and Salisbury parkrun. Eileen also celebrated her 80th birthday this week making her 50th run very special.

Ethan Dodd is a junior runner who has run 9 parkruns (8 at Knowsley) and his next run will be his 10th which will earn his a Junior White 10-run commemorative T-shirt. Ethan was one of our volunteers this week, appearing as Tail Walker.

Number of runners who have volunteered 25+ times – 4. Well done to them.

The top 5 attendees this week were:

These five runners have completed over 700 parkruns between them.

Want to give feedback? Have anything to say or want anyone mentioned in future run reports? Are there any corrections needed to this report? Please e-mail knowsleyoffice@parkrun.com

VOLUNTEERS – REMEMBER that parkrun can only take place weekly because of the volunteers and marshalls who give up their time on a Saturday morning. If you want to get involved, email knowsleyhelpers@parkrun.com. This week, we had 18 credited volunteers so thank you all.

And potential runners remember that to officially take part at Knowsley (or any other parkrun anywhere) you need to be registered at www.parkrun.org.uk but you only need to register once and the barcode they give you will be needed each week when you have finished the run. DON'T FORGET YOUR BARCODE.

There are some brilliant photos on Facebook and Flickr, taken by Paul Hanley so if you are on one of them, feel free to copy it for your personal collection.

Knowsley parkrun started on the 10th December 2016 with 123 runners and 16 volunteers. The course record was set on the 3rd week on Christmas Eve 2016 by Ed Knudsden in 16:44, and the female course record was set by Charlotte Wilson-Dewhurst in February last year in 20:09. There have been 1,376 different runners on the course, representing 160 different running clubs, and they have completed 4,145 runs. The average attendance is 61 every week and there have been 885 Personal Bests. The attendance record is 138 which was set at run #50 and is the only time that the attendance of the inaugural run has been beaten. Knowsley parkrunners have completed 20,725Km (12,953 miles).

And that's it for the report for run #68. If you fancy writing a run report, and putting your slant on it, get in touch. I'm sure Richie would love to hear from you, and it would give him another weekend off. I've now done one more different parkrun than my wife (she is in Thailand) but when she gets home she will want to catch me up again so see you all again soon..