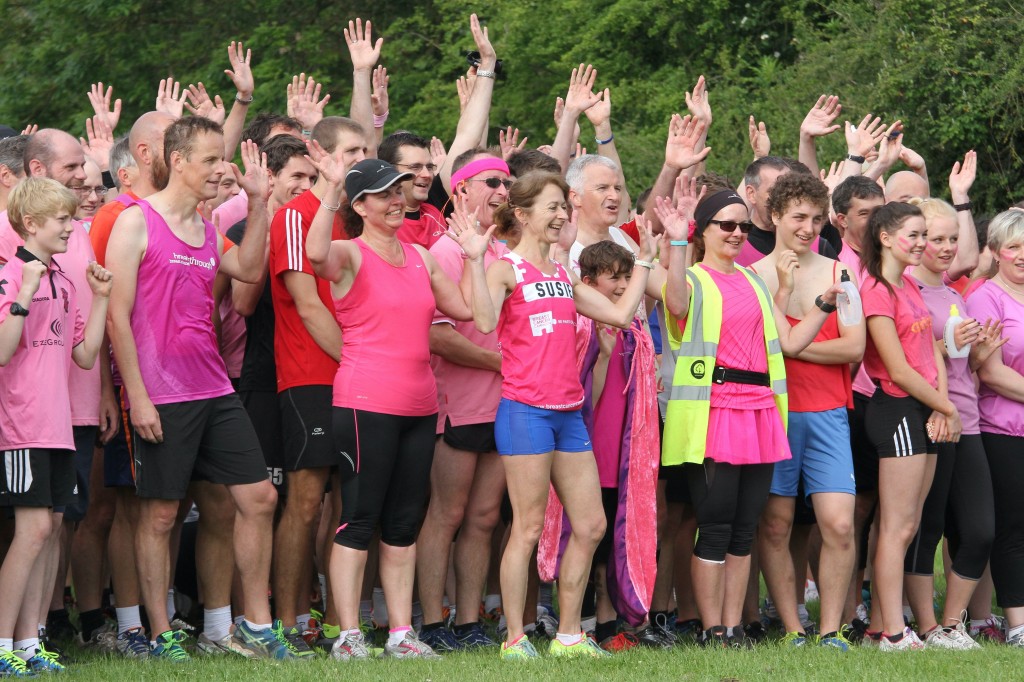 Pink parkrun has become a highly anticipated event at Leamington parkrun.  It started back in 2012 so this year would have been our 9th.During that time the wonderful Leamington community have raised £7237.62 for Breast Cancer Now, a charity that funds innovative and life- saving research into breast cancer. It began in memory of a dear friend of mine who died of breast cancer leaving a husband and three young children. I promised her I would run the Great North Run so in preparation I proposed running four laps of our 5k course, roughly the half marathon distance.

We started at 7am and in the first year about 20 people turned up to join me. More people joined in on subsequent laps until a large crowd had formed for the usual 9am parkrun. This format has remained the same over the years, but numbers haven’t. In 2019 almost 60 were there at the start and many did all four laps. Most have learnt that you won’t be out of place in an outrageous pink outfit but a simple pair of pink socks or ribbon in the hair will also do. Running, walking, pushing the children in a buggy, bringing the dog. Everyone has always been welcome. 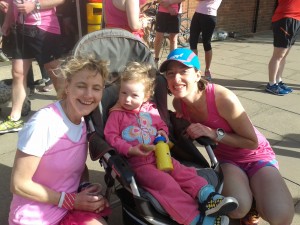 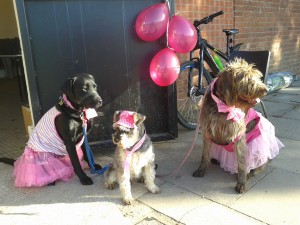 I have included some of my favourite shots over the last couple of years. This year it won’t be possible to organise our usual event but we would still love to see you dress up for the occasion, even just in the garden! Please send in your Pink parkrun pictures so that we can keep the event alive. Hopefully it will be bigger and better next year! 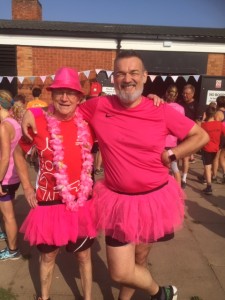 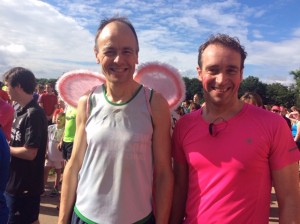 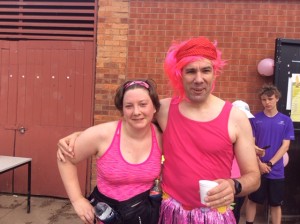 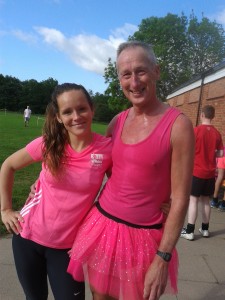 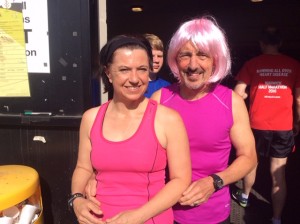 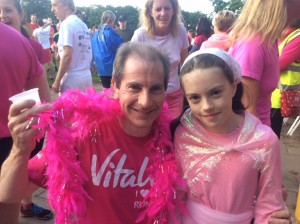 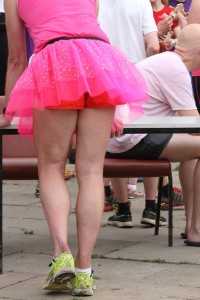 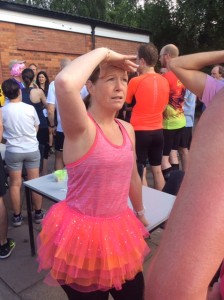 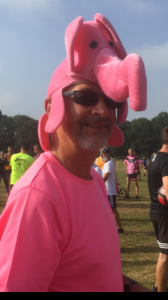 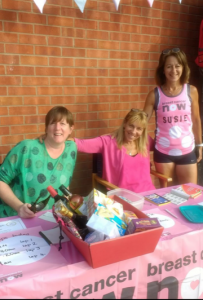 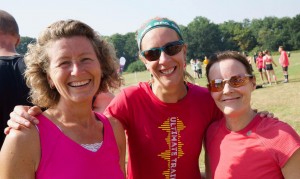 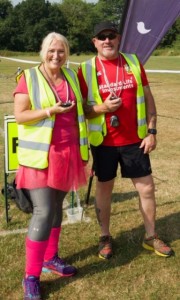 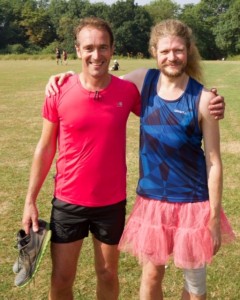 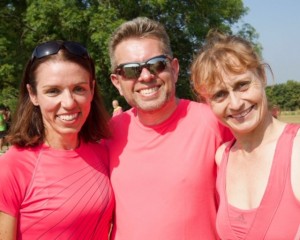 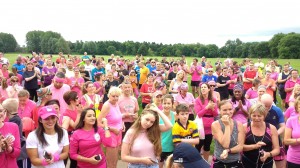 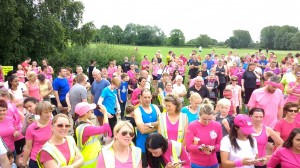 We realise not everyone has FB and so can’t follow what is happening locally. This week we had lots of parkrunners send in a video and the result is below. We apologise that we didn’t open it out to non-FB people, we needed it done quickly.
We do miss you all, hope you are safe, and hope we get together again soon. Our 10th Birthday will be huge next year! Email in leamington@parkrun.com to raise any points, take care

We are really spoiled this week as we have two run reports that have been written for us.

This week, parkruns across the country were “taken over” by members of Girlguiding, who volunteered to marshal, scan barcodes, manage the funnel, make the tea & generally add a bit of Girlguiding sparkle. Many of our members, be they 5+ year old Rainbows; 7+ year old Brownies; 10+ year old Guides; 14+ year old Rangers or 18++ year old leaders, ran wearing uniform and/or neckers (scarves) to raise awareness of our organisation. 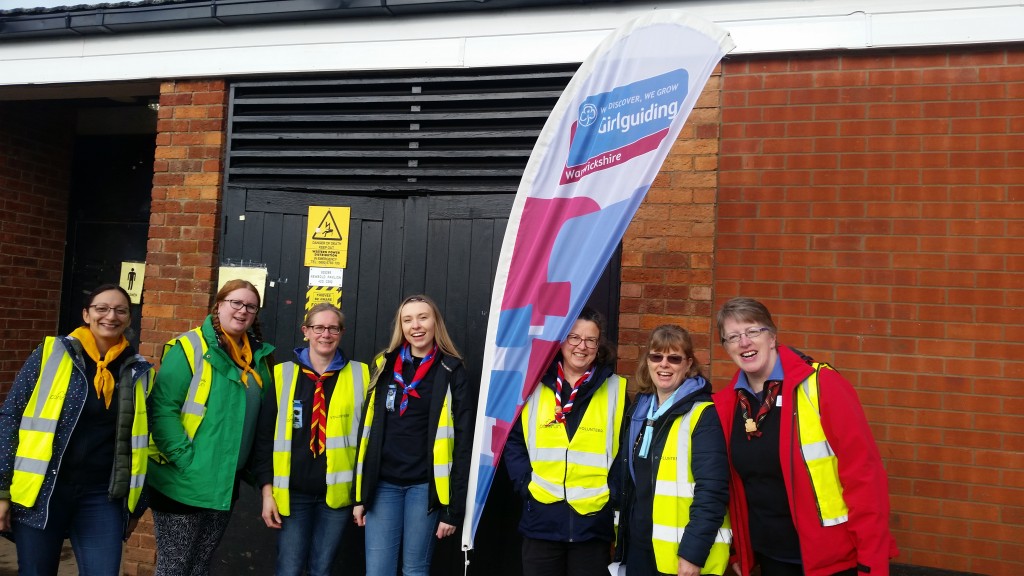 All Girlguiding members promise to serve their community (amongst other things) & so today we ventured into the parkrun community & what an adventure it was! We were immediately welcomed into a friendly, inclusive & caring group, given hi-vis jackets & deployed to our various stations. I was signposted to the barcode scanning area, which turned out to be a very social role with runners ready for a quick chat having finished the run.

The early finishers were the muddiest & I’m guessing they didn’t have time to avoid the puddles/mudbaths out there. It was lovely to greet the family groups, especially those in Girlguiding uniform, many of whom were parkrunning for the first time, although I suspect not the last. We also had a few muddy encounters with dogs (& their owners) enthusiastically returning from their run.

One of my fellow Girlguiding leaders was a marshal & was amazed to see what a difference her cheering & encouragement made to the runners. In true parkrun style, the runners thanked her for her efforts, which felt odd to her seeing as they were the ones doing all the hard work!

parkrun environments are supportive places, where people achieve & talents are discovered. The benefits are physical, mental & social. I cannot help but compare this to Girlguiding, where all our members are encouraged to challenge themselves, developing skills & confidence to make a difference to the world around them. I hope you visited our Girlguiding table today & took away a leaflet. If not, please visit www.girlguiding.org.uk to find out more about the opportunities we offer.

Many thanks to these folk for their support; they truly did a fantastic job! It was great to see so many of them. This is an opportunity to remind ourselves that parkrun would not be possible without the army of volunteers each week. It truly amazes me that so many people turn out week after week to volunteer so that others can run. It also disappoints me that there are some parkrunners who run week after week but who have never volunteered. Come on people, it’s never too late!

This week’s run was held with the cloud of the Coronavirus hanging over us. Quite rightly we were reminded to take sensible precautions such as washing our hands thoroughly and keeping a social distance. We were also asked not to hand over our tokens and barcodes to the barcode reader volunteers but to leave them on the table so as to limit physical contact. All very sensible measures. We’ll just have to see whether parkrun falls victim to the cancellations of gatherings of large numbers of people going on around the world. It certainly looks likely it will before too long. If so, it certainly begs the question: what on earth are we going to do on Saturday mornings?! Some of us will have to find alternative forms of entertainment and activity. Anyone for a bike ride?

Whatever happens, everyone take care and look after each other.

I can’t finish the report without mentioning that we nearly started 75m further down the field before the errant start line was noticed. What a shame, we’d all have had better times! 336 runners are looking for the snitch!!! 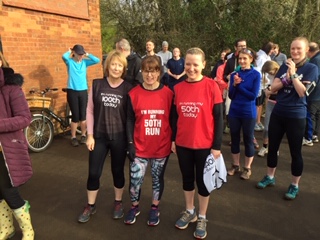 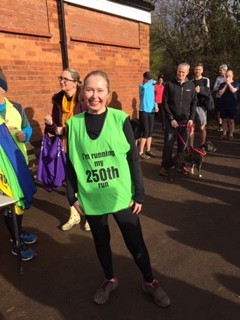 There were plenty of people running milestone runs today:  Brother and sister, Hugo and Matilda, and also Isobel ran their Junior 10th runs, Maria Dobson, David Spurling and Emma Baker ran their 50ths, Chris Davison ran her 100th and Lesley Virr ran her 250th.  There were also a couple of people running in birthday vests. 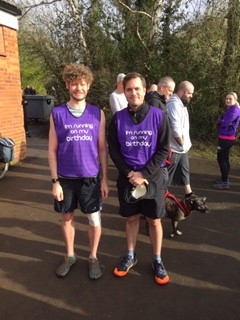 The final word from Girlguiding,I know parkrunners love their stats, so here we are:

This week 337 people ran, jogged and walked the course, of whom 17 were first timers and 38 recorded new Personal Bests. Representatives of 27 different clubs took part. 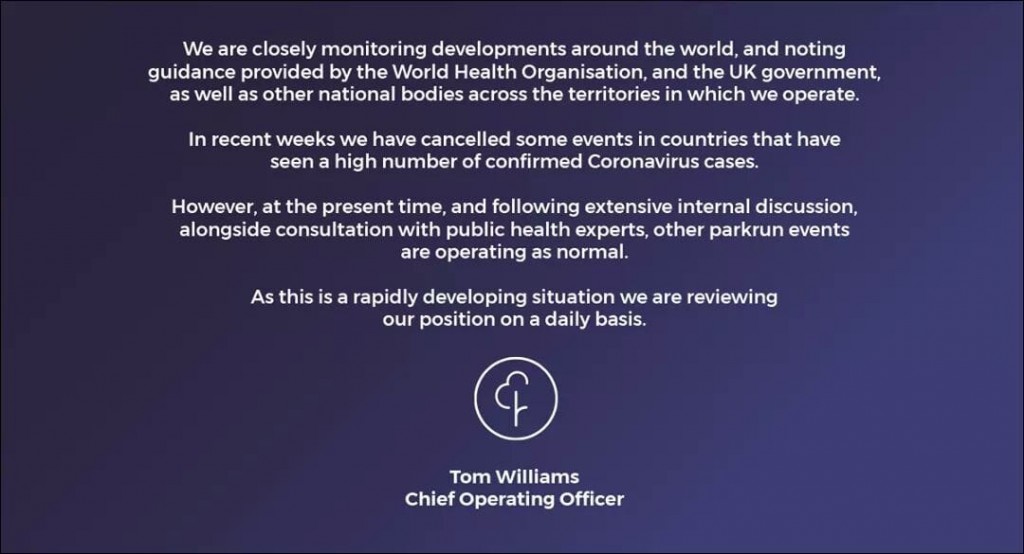 I feel extremely privileged to be given report-writing duties on the day that parkrun is supporting International Women’s Day. It was also a significant day for me, being as it was my 60th birthday and my 250th parkrun. Thank you to all those people who wished me “Happy Birthday” on the run today whilst wearing ‘The Birthday Vest’! What lovely people we have at Leamington parkrun. 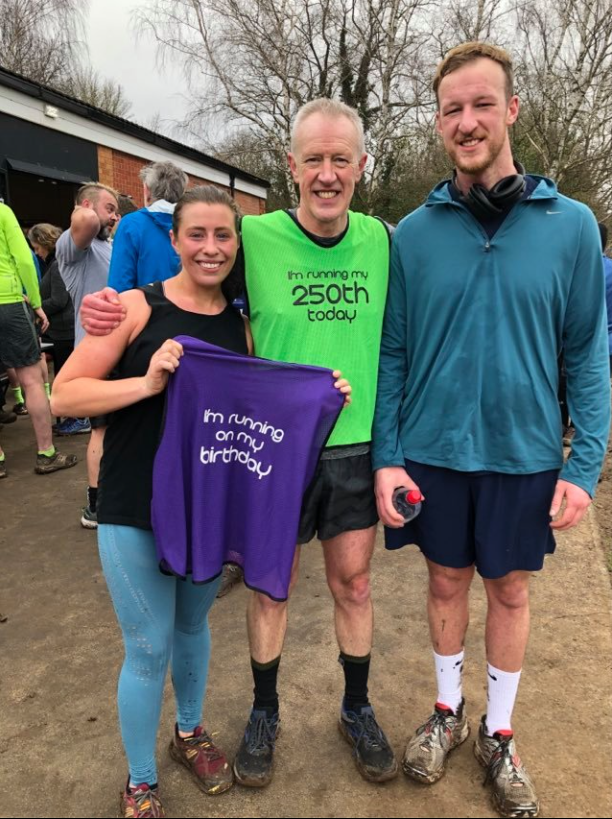 Richard ran with his children on Saturday 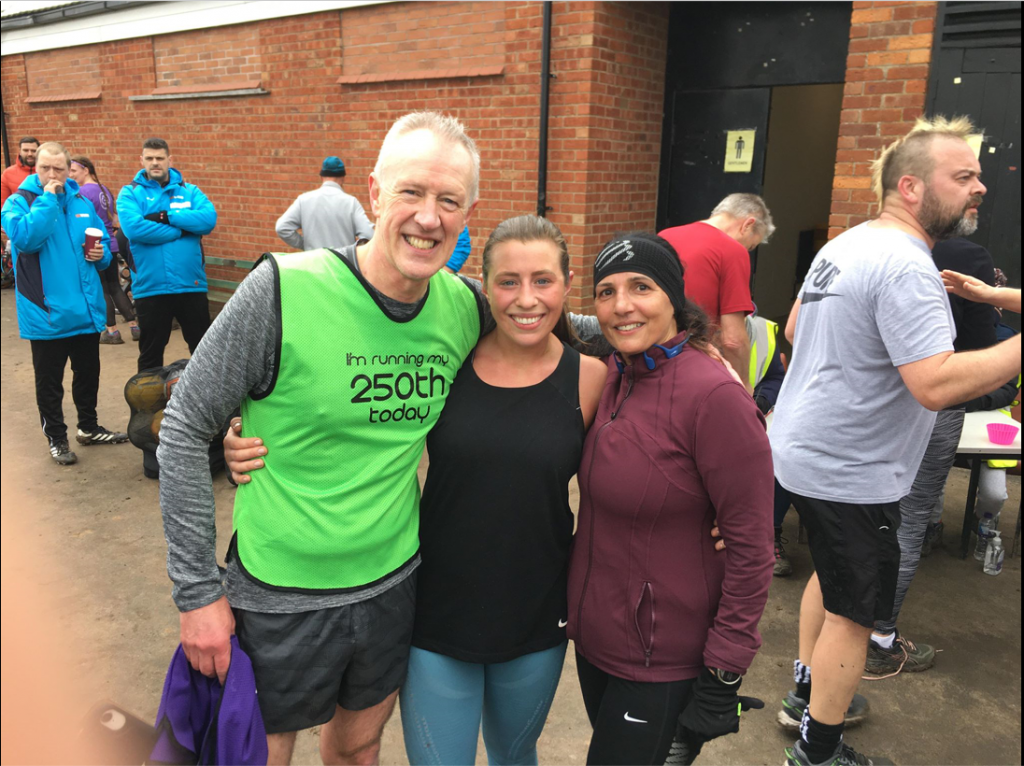 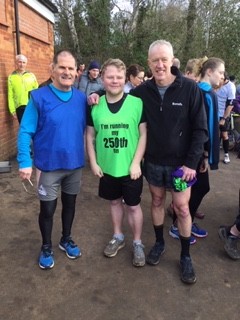 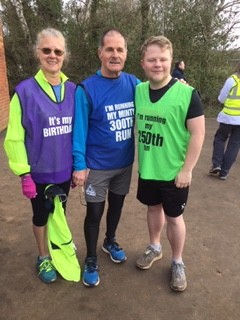 This Saturday, parkruns across the world marked International Women's Day – a global day celebrating the social, economic, cultural and political achievements of women. parkrun, with its agenda of inclusiveness, is a great platform for marking this event. Our own Leamington parkrun played its part fully with publicity on social media leading up to the day and the assembling of a mainly-female volunteer team. However, as if to prove that we all need each other, some males were recruited to complete the team! 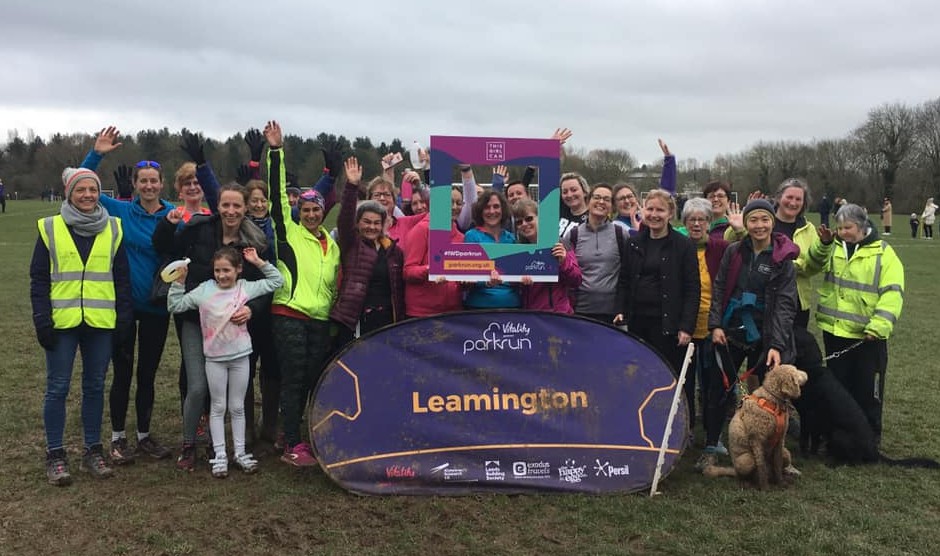 The first ‘Women’s Day’ was held in New York City in 1909. In 1977, the United Nations declared an ‘International Women's Day’, described as “a day each year when the world should celebrate, recognise and remember women and the accomplishments they have made to society.”

The International Women's Day 2020 campaign theme is “I am Generation Equality”. All of us need to do whatever we can to help ensure that, before too much longer, campaigns like this are no longer necessary and that the only time unequal treatment is written about is in a history book. We can choose to challenge stereotypes, fight bias, broaden perceptions, improve situations and celebrate everyone’s achievements. Great strides (to use running vernacular!) have certainly been made in many countries in recent years. Hopefully this progress will continue and other, less enlightened, parts of the world will catch up.

In the meantime, we can play our part in making this a reality. I have the upmost faith in the parkrun community to do this. 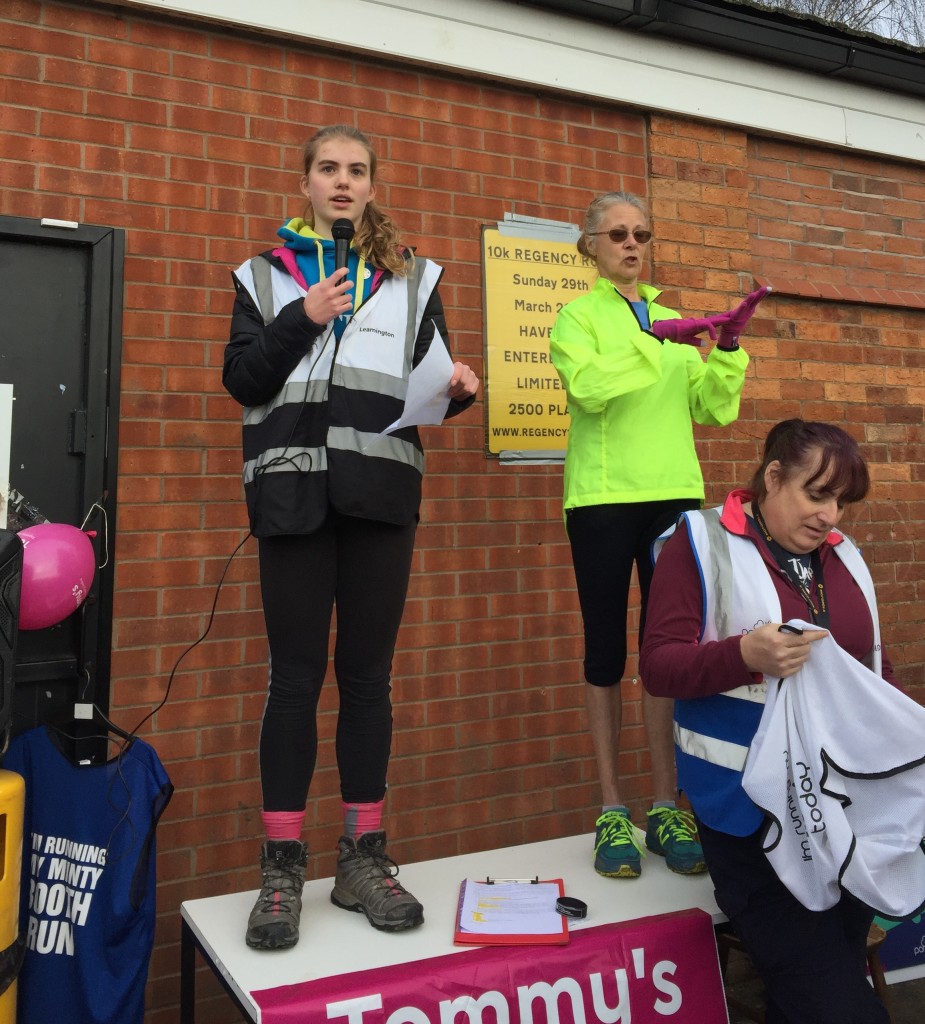 Amy, one of our fabulous DofE volunteers was brave enough to take on the role of Run Director and gave the run briefing.  She was an amazing example of a strong, powerful woman today.

This week 422 people ran, jogged and walked the course, of whom 43 were first timers and 48 recorded new Personal Bests. Representatives of 28 different clubs took part.