A windy, sunny and rainy morning welcomed the 563 parkrunners at Leamington today. Welcome to all new parkrunners and tourists. Hope you enjoyed our flat run with an undulation as I recently heard it described.

Big congratulations to Sam (who came third this week - wow!) and Michael Weaving on a father and son 250th parkrun, a fantastic achievement.  Congratulations also to Emma Teevan and Philip Voyias who ran their 50th parkrun too. 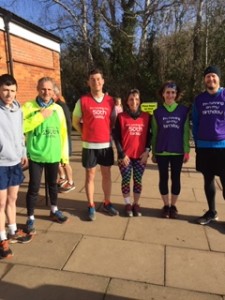 Thanks as always to all volunteers including our tail walker who came super prepared with headphones and a Moby playlist in hand. Don’t forget Hi-viz heroes are always needed. Please sign up at http://www.parkrun.org.uk/leamington/futureroster/

I love the attraction that parkrun has become and was delighted to spot yet another neighbour and his son running (I think) for the first time. That makes more than 50% of my neighbours participate in parkrun, probably about the most common thing between us. Thank you parkrun.

Congratulations to everyone who participated, see you at Leamington soon.

(Addition by ED:  Happy 50th Birthday to Jonathan, one of our Run Directors, today 10th March)

Here are the statistics for the week:

This week 563 people ran, jogged and walked the course, of whom 41 were first timers and 52 recorded new Personal Bests. Representatives of 33 different clubs took part.