parkrun is a free, weekly event that has become something of a phenomenon. Josh Layton joined the runners, and their faithful companions, in Leamington Spa.

With a youthful brass band, intermittent sunshine and a rather competitive cocker spaniel, Leamington parkrun had the feel of a village fete with added nylon.

Royal Spa Brass’s youth sections, with a few more experienced hands thrown in, even got a few hands clapping with a rendition of Uptown Funk as a crowd of 466 runners limbered up outside a sports pavilion at Newbold Comyn in Leamington Spa.

Dave Chantrey’s run briefing included a message to be nice to other runners – following a report of some “so not cool” pushing on a previous week – and an effort to reduce plastic cups in the café by encouraging runners to bring their own receptacles from August 31.

The run director also dropped some factoids about the number 433 – apparently a prime number and the maximum score in the defunct game show Fifteen to One. 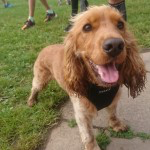 With the milestoners having collected their bibs, a ritual of every Leamington parkrun, we were off. 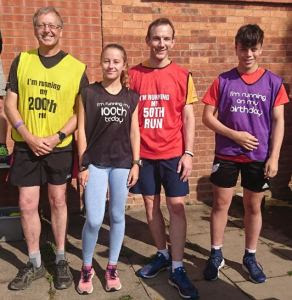 Milestones are marked at each run

The free, timed, weekly event is a 5k circuit of the currently unused Newbold Comyn golf course. Walk, run or let a dog do (some) of the work – it’s open to all, every Saturday. 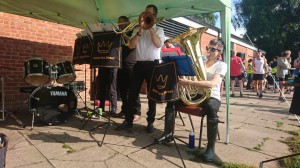 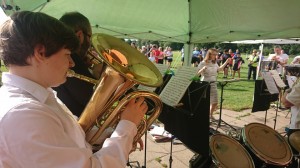 It climbs a fairly brutal hill onto a tree-lined path that loops round the abandoned green before winding up on playing fields that make an ideal sprint finish.

But times, and rankings, seemed to have drifted off with trumpet notes by the end. 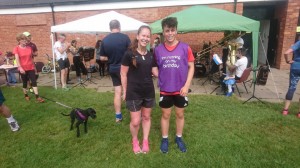 Marking the day: Ben and mum Amanda after the run on his 15th birthday

Ben ran on his 15th birthday along with mum Amanda.

“The best thing about parkrun is the community aspect  – and beating mum.”

Ben, who has also volunteered 34 times, added that he planned to spend the day playing Xbox.

Mum Amanda registered her 154th run on the morning having first taken part in 2013, and was pipped to the finish by her son.

“You meet lots of lovely people and make some fantastic new friends,” she said.

Dog runner James Deeks ran strapped to cocker spaniel Clara – believed to be first dog home in a time of 22:43.

“I always like to run with her, she’s got more energy than me,” he said.

Bonny Landsborough was also among the runners dodging “passive aggressive vegetation” on the course. The keen allotment gardener, 61, has gone from walking three years ago to gain muscle strength to regular parkruns and her first 10k event earlier this year at the Regency Run, also in Leamington Spa.

“It was a good run, it was hard work as always,” said Bonny.

“It’s just a lovely atmosphere. Two people on the allotment told me to come and you meet lots of lovely new people and feel great after it. It keeps me fit and active…and it’s good for my brain too.”

Cafe stalwart Kate Jackson, known affectionately as Mrs Doyle, was keeping the refreshments, cakes and dog biscuits flowing – as she has done for the past eight years. 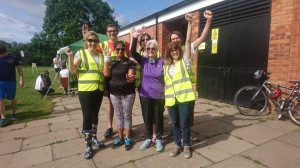 Like all the volunteers, she gives up her time for free – and it’s the thirsty parkrunners grabbing water, tea and squash who make it worthwhile.

“I’ve watched it grow from a hundred runners to five or six hundred most Saturdays. 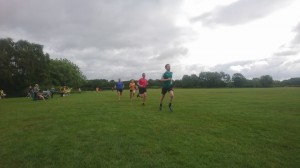 “There is one chap who had never run before February when he went to Ireland, and he has carried on here. You also have plenty of little kids.

“Every month we support a charity – this month’s it’s the Motor Neurone Disease Association. 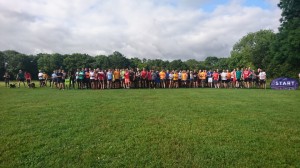 As the runners sloped off in the sunshine, the brass band kept playing.

Led by Emily Stewart-White, the musicians included Royal Spa Brass’s Brass Roots and Buddin’ Brass youth development sections. First place was said to have been wearing a green top, but had long disappeared by the time she leafed over to a Glen Miller number.

It was a day when community spirit led the field. 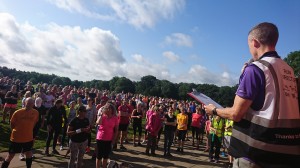 This week 466 people ran, jogged and walked the course, of whom 49 were first timers and 45 recorded new Personal Bests. Representatives of 34 different clubs took part.